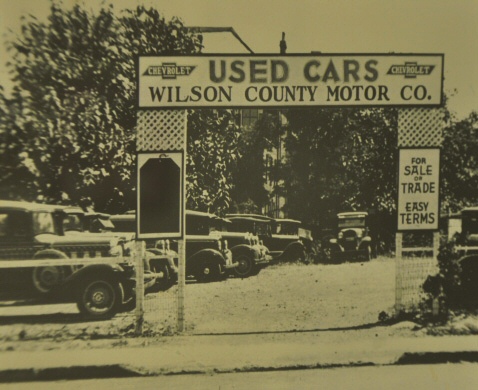 GMC Dealership: One of the earliest photos of the dealership started by Winstead Bone.

America was a vastly different place in the 1920s. The “Roaring 20’s” as they were dubbed, was the era of flappers, jazz music, and the Charleston.

America was a vastly different place in the 1920s. The “Roaring 20’s” as they were dubbed, was the era of flappers, jazz music, and the Charleston. This was also the time when mass culture took off, Americans had extra money to spend and they spent it on consumer goods like ready-to-wear clothes and home appliances such as electric refrigerators and radios.

During this period, the car became a vehicle for the masses. In 1928 the average car was just $525. The same car had cost $1200 in 1909. So by 1928 almost 20% of Americans had cars and cars were definitely here to stay. And it was during this period, 1927 to be exact, that Winstead P. Bone Jr. and his partner A.W. Hooker opened the first car dealership in Lebanon. “At the time, it seemed America’s good times would last forever,” noted Mitchel Bone, grandson of Winstead Bone. “But in 1929, two years after opening the dealership, the stock market crashed.” Not the best of starts for this fledgling business, to say the least.

“My grandfather was the type of guy, though, that always saw the future. For the next 40 years the Chevrolet franchise established on South Maple Street survived and even thrived although there was a war, and later floods and a fire. During World War II, for instance, there were few cars to sell and the dealership developed a large parts business instead. My grandfather could definitely see the big picture.” But, while times were certainly challenging during some of these years, it was also during these times that America found its footing and prosperity came back, led in many ways by the car industry. As the business expanded, founder, Winstead P. Bone was later joined by partners Sam Hopkins, Mort Harkey, Dee Manning and Dan Denney.

W.P. Bone III, Winstead’s son, recalled “my father was just about to graduate from Cumberland University Law School and A.W. Hooker (of Fakes & Hooker) came to him and told him that he’d been offered a Chevrolet dealership but Mr. Hooker wasn’t interested in running it, instead he offered to help my father start it. Three days after graduation my father went to work at the new dealership and never looked back.

Wilson County Motors moved its location on West Main Street in Lebanon in 1964, seen here as business owners and local figures broke ground for the facility.He had me working at the dealership when I was a kid. We lived near the dealership and I’d ride my bike up there all the time. I’d wash cars and they’d pay me with nickels from the coke machine. My father was a hard worker, he was the type that persevered. We had a fire in 1938 that burned us down, the 100-year floods tried to wipe us out and then again, in 1975, suffered through another Fire. My father just kept going. Nothing got him down.”

When W.P. finished school, however, he chose not to go into the car business, instead becoming the Executive Director of the Chamber of Commerce and later working alongside Dr. Stockton at Cumberland University. “One day one of my father’s partners asked me if I was ready to join the car business. First, I said ‘yes’, and only after accepting did I ask if anyone had asked my father,” Bone laughed. “I truly enjoy working in this business. It’s unlike any other. Every day is different because each day I either meet someone new, who has a different story to share, or else I catch up with someone I’ve known for a good while. It’s all about relationships.”

In 1964 Wilson County Motors moved their entire business to the West Main location. Over the years the franchises have expanded to include the Buick, GMC and Hyundai and at one time Plymouth and Oldsmobile. Winstead Bone retired in 1980, Mr. Hopkins in 1985 and Mr. Denney in 2005. W.P. Bone III is the current dealer principal.  In 2006, Mitchel Bone and a year later Paine Bone returned to the family business to join their father and sister, Nancy, the Quality Control Administrator. Family is at the heart of this family run business. Paine, who is married to Maria Bone, has two sons, Hayden and Zach. And Mitchel is married to Melinda Bone.

“For most of our lives, our father steered us away from the car business because of the inherent fluctuations in the business. However, it was very important to all of us to keep the business in the family.” Upon graduation from high school, each enlisted in the U.S. Navy. After being honorably discharged, Paine worked as a network administrator at Conference America in Alabama and, before that, built the computer network at Cumberland University. Similarly, after being honorably discharged from the Navy, Mitchel became the Chief Information Offficer at Cumberland University. While at Cumberland, he earned his Bachelor of Arts degree in History and Master of Business Administration. Having learned much from life and work outside of the car business, at a certain point, each, separately, made the choice to rejoin the family business. “The time was just right. The car business is in our blood. We both realized that,” Mitchel commented. And when they came back, each brought back a wealth of business experience that they would not have had, had they never left.

“I enjoy working with my children,” W.P. remarked, “and I’ve come to realize how patient my father was with me, teaching me all he knew. I’ve given them aThe Bone family, including all five of Mr. Bone’s children and his grandchildren were in attendance at the Grand Opening. crash course and couldn’t be prouder of their work ethic, their business sense and their willingness to embark on this new venture. They remind me of my father in many ways.”

Today Paine is the General Manager of Wilson County Hyundai and Mitchel is the General Manager of Wilson County Chevrolet Buick GMC. Along with their father, W.P. Bone, they are partners in both businesses. W.P., however, was quick to point out that the “business isn’t just made up of Bones. We have had team members who have been with us for decades, who are like family. In fact, Frances Anderson came aboard in 1947 and stayed until her death in 2010.  She was the one who’d get the nickels out of the coke machine for me after I’d wash the cars.

We also have employees, not just from Lebanon, but David Thompson is from Dekalb, Randy Legge and Mark Pitt are from Sumner County, John Collins and Belinda Wilson are from Macon, Robert Crawford and Sue Armistead are from Smith, Linda James and Frank Hartley are from Davidson and Tracy Johns is from Trousdale. And we don’t just take care of people from around here either; people travel from all over the country to work with us. We have been taking care of certain customers and their families for generations.”

All three are very proud of their business and rightly so, as the company has a long tradition of growth through their solid ethical business practices and community involvement. That ethical approach has received state and national recognition. In 2004, they received both the Tennessee and National American Business Ethics Award for small companies.

In 2012, the Bones felt that the time was right for expansion. “We believe in Wilson County and support its growth and expansion,” remarked Mitchel. “Given how middle Tennessee is growing, we knew the time was now to participate in that growth and move the business to its new location at 903 South Hartmann Drive.” This state of the art facility sets a new standard of excellence for automotive dealerships in Wilson County. With a 9.5 acre footprint, a large service bay facility and room to showcase over 700 cars on the lot, Wilson County Motors continues their tradition of striving to bring the best to the community.

The new location on Hartmann Drive during its Grand Opening weekend.“We had been in our previous facility for 48 years and it lacked many of the features that our guests deserve. With this new location, we designed every aspect with our guests in mind. We want those that visit us to feel at home and to not think of coming to the car dealership as a chore that has to be accomplished, but rather something to look forward to doing,” remarked Mitchel. As to what is to become of their other properties, Paine mentioned “that the building at the corner of West Main and South Hartmann will begin its facelift in the coming weeks. We expect that process to take about four months and then Wilson County Hyundai will move to that corner.” The buildings at 1504 and 1506 West Main are currently for sale.

On March 29, 2013, Wilson County Motors celebrated their grand opening of their new facility. The crowd in attendance was a true testament as to how valued the Bone family is to the community to which they have given so much. Kevin Beaty, the new Chief Operating Officer of the business, was on hand for the grand opening and remarked, “I grew up with Mitchel and Paine. In fact, Mitchel and I were always at each other’s houses when we were young, so working here is like coming home. A few months ago, I was traveling a lot as the GMC National Products Trainer and got a call from W.P., asking if I was ready to get off the road and join their team. It took all of a minute for me to know the time was right for this new venture. This new place is not only state of the art but also welcoming and that’s really the story of the Bone family success. They are innovators, all of them, starting with Winstead Bone to today, as W.P., Mitchel and Paine establish one of the most modern dealerships in middle Tennessee.

And yet, at the same time, they’re welcoming. This place may be high-tech, but its also comfortable and hospitable, our customers know us by name and ourABOVE: Mr. and Mrs. Bob Jones have graciously allowed their restored 1927 Chevrolet Roadster to be displayed at the new facility goal is to know each of them by name. I’m glad to be here during this important time and see big things down the road.”

And the legacy certainly continues, as Hayden and Zach Bone, in attendance at the grand opening, were completely at ease in the new dealership, moving from one room to another, as Hayden commented, “the new place is amazing! I am definitely, definitely going to work up here when I’m older.”

If you haven’t had the opportunity to check out the new Wilson County Chevrolet Buick GMC Dealership, stop by for your personal tour. The dealership is open Monday through Saturday from 8 a.m. until 8 p.m. It’s located at 903 South Hartmann Drive, Lebanon, TN 37090-4048. For more information on their services or any of their lines of vehicles, give them a call at615.444.9642 or visit www.Wilson-CountyAuto.com..