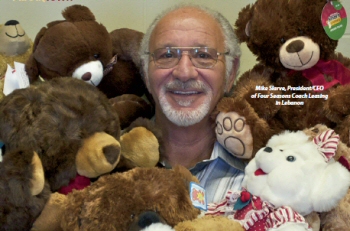 Just eleven days before Christmas last December 2012, our nation and the world were shaken by the unthinkable shooting of twenty children and six adults at Sandy Hook Elementary School in Newtown, Connecticut. What followed this horrific tragedy was a tremendous outpouring of sympathy, love, prayers, and support for the school and Newtown community. People from around the world who wanted to express their grief and extend love to Newtown sent letters, cards, toys, and stuffed animals, especially teddy bears, an endearing symbol of love and comfort. The City of Newtown received so many stuffed animals, they had to rent warehouse space, and eventually began to share the toys with other organizations serving children in need.

Local business owner Mike Slarve, President/CEO of Four Seasons Coach Leasing in Lebanon, heard about Newtown’s abundance of toys. Mike is nicknamed the “Teddy Bear Man” because he collects new or like-new teddy bears year-round to give away to area children, through his favorite local charity, Christmas 4 Kids. Mike’s employee, Pat Nabors, contacted the Newtown Chamber of Commerce, and after several months, Pat and Mike received word that Newtown would share their teddy bears with Christmas 4 Kids. But, there was a contingency with the offer, that is, Mike had to pick up the toys in Connecticut within just a few days, because Newtown was closing down the warehouse. What must have been a Divine plan, Mike happened to have one of his luxury coaches and a driver, with a trailer, that had dropped off a group in New York City that very day. The driver, Brook Langdon, gladly agreed to drive to Newtown and pick up the teddy bears, and deliver them back to Mike’s company headquarters.

Mike estimates Newtown donated more than 2,000 teddy bears in various shapes and sizes, which will be distributed to each child through Christmas 4 Kids,

Holly Thompson of WSMV – Channel 4, shopping with a child Photo Coutesy of Cyndy Carroll and also other area charities. Slarve noted that kind notes of encouragement and prayers are attached to many of the teddy bears.

Christmas 4 Kids began several years ago with bus drivers who donated their time and money to take area children Christmas shopping. As the organization grew, the entertainment coach owners also supported the effort by donating coaches and funds, along with celebrities like Charlie Daniels, Tennessee Titans, and many volunteers.

The effort is also supported by local fire fighters and law enforcement. About 80-100 buses take nearly 1,000 children for a day of Christmas fun. Wal-Mart closes a store for the event, and gives the children a discount on purchases, with the money provided to them through the charity for shopping.

This year, The Charlie Daniels Band & Friends will host a benefit concert at the Ryman Auditorium on Mon., Nov. 25, and there will be a tour bus show on Dec. 16th. On Dec. 17, hundreds of children will be treated to a day of special activities, and then taken Christmas shopping that evening.

“We do this for the love of the children,” declared Slarve.

“My heart has been broken many times when going as a chaperone with a child for the shopping event. Often they use their money to buy gifts for family members, rather than for themselves,” he said. The children selected for the event are recommended through Tennessee Children’s Services and area schools. Mike said many volunteers are needed to serve as chaperones, and financial donations are welcome. He will continue collecting teddy bears for children for upcoming events. To donate, drop off your teddy bears at:

For more information about volunteering or participating in events for Christmas 4 Kids, visit their website at www.Christmas4Kids.org