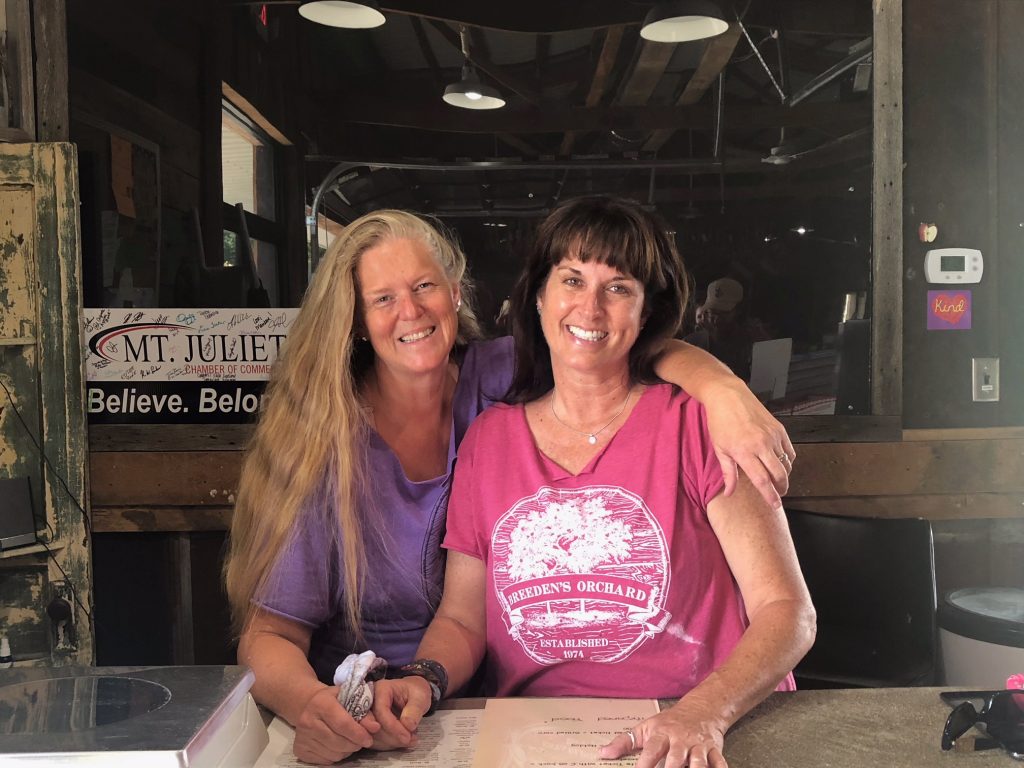 They might be called a little “zany” to go out on a limb(s) (peach and apple that is!) and buy a revered orchard in Mt. Juliet during a ‘mid-life’ crisis whim. But, they did and those limbs are strong!

It’s the Breeden’s Orchard County Store & Farmers Market. It’s a fresh new revamp on a beloved orchard that originated in 1974.

They’ve put their style and panache in the place, but with a respectful homage to the long-time owners who had to sell.

Together, Wendy and Aimee saved this pristine little orchard from the hungry hands of developers who wanted to raze the long-developed peach and apple trees to ‘raise’ a sprawling development.

Long time owners, the Breedens, had to sell after decades, simply because of health and age.

Aimee and Wendy are a cool pair. The “zanies” reference is to their partnership with their husbands in the well-known Zanies Comedy Club enterprise the past 25 years, ad all across the country. They’ve been doing it for decades, and, well, maybe a “zen” orchard was in order.

“We are in our 50’s now,” laughed Aimee. “We got a call to see the orchard. It’s a different path. It was so beautiful [the orchard sold by long time Tom Breeden because of health issues]. It was a dream that just sparkled.”

Rather than a bright red convertible mid-life crises issue, these two decided ripe peaches and red apples were more apropos.

Let’s get to real time and what this duo has done to enhance the orchard and provide a wonderful outlet for locals in Wilson County.

Their she-shed-place of business is spectacular with great space to showcase a myriad of locally produced products. It’s an Amish-style barn retrofitted with wood that came from the Breedens’ house and barn. No sadness, there’s still a place left where these women work, that was the Breeden’s home.

These nature lovers and preservers of history look toward many school field trips to visit them, and they are researching new apple varieties to call this place home.

“It is hotter, and we are sweatier and still celebrating our mid-life adventure,” said Aimee.

This year, Breedens’ peach trees have flourished so much that they opened up the orchard for a few limited u-pick days, something they thought they were years away from, or at least till their new grove of trees was ready.

“Although the trees are still old and fragile, they are stronger than we thought, well, and that the fact that some of those summer storms took out the weakest limbs,” said Wendy.

This year, Wendy and Aimee are making all their own fried pies, paying homage to the southern way with fried apples and dried fruit and perhaps leaf lard.

“We do get asked if we are frying them in leaf lard, I can’t source enough leaf fat or flair to do that,” said Aimee.

They say they don’t have a southern bone between the two of them, but, have managed to get more than a few “this tastes like my grandma from y’all.”

Think about peach, apple, lemon, chocolate, pecan pie, coconut cream, chocolate peanut butter, cherry, blueberry, blackberry, apricot, German chocolate, and finally, caramel banana fried pies and they are your ticket atop the orchard that is thriving under their care.

“And yes, we are working on sugar free and made without gluten varieties, but they are still in the testing stages,” said Aimee.

Both said they’ve augmented this orchard to include so many more agricultural opportunities. They said they want to get Tennessee peaches into peoples’ mouths and to remind them that the flavor of Georgia peaches doesn’t hold a candle to Tennessee peaches.

And, now they have their Scottish Highland beef cattle and invite people to taste and buy.

Aimee said they have a lot of fall activities planned. Their pond is taking shape, and, they baby their new 500 baby peach and apple trees.

“Some of the new varieties of trees took, some didn’t,” said Wendy. “Farm life lessons…not everything is going to take.”

One of their exciting new bits of information is that Edible is having their farm to table fall dinner at the orchard on Oct. 5.

Go to Breeden’s Orchard Facebook for updates on everything.

“We are doing a happy dance,” said Aimee. “We are a great spot for packing a picnic, grabbing some fried pies or a donut, a cider slushie and enjoying an afternoon with the family. This year, we will also have fresh beef from our herd of Scottish Highland cattle. We look forward to seeing you!”

This orchard is located at 631 Beckwith Road in Mt. Juliet.