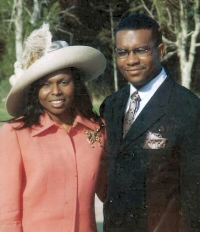 Preserving past memories while creating a lasting legacy

We are made wise not by the recollection of our past, but by the responsiblity of our future.” – George Bernard Shaw

James and Stacey Neuble as newly wedsIt’s not a subject everyone likes to talk about, but we all face it eventually. Out of the two life certainties mentioned by Christopher Bullock in ‘The Cobbler of Preston’ and Ben Franklin, those being death and taxes, most agree death is the most macabre of the two. If you’ve had to face the task of planning a funeral for a loved one, you understand how the person helping you make arrangements is just as valuable as the family grieving along with you. In fact, at the end of the arduous process many funeral directors become adopted members of your clan.

For the owners of Neuble Monument Funeral Home in Lebanon, family is where their story began. Funeral Director, James Neuble explains, “I have a cousin who is a funeral director and his family owned a local funeral home that was right down the side walk from where I lived. I always wanted to be just like him because he loved serving people at any level. I admired that. To serve a family during their most devastating time is extremely humbling.”

Before starting Neuble Monument Funeral Home with his wife, Stacey in 2012, James began his career in 1997 at Disyal Funeral Home in Lebanon, working there until its doors closed in 2010. A few weeks later the Neubles decided to step out on faith and create an establishment that would not only preserve the integrity both had been raised with but also build a lasting legacy for their son, Jase.

James draws on personal experience to provide unparalleled service to those in mourning. “My mother, Joyce Thompson was killed in an automobile accident in 2006, coming back from a church convention. Every day I think of how proud I am to be her son. I know how hard it is to lose someone close.” In fact, many of the characteristics James brings to business, were taught to him by his mother. “Mom was a social worker with Prospect, Inc., and she used her experiences there to show my sister and me that it doesn’t matter what a person looks like or where they come from, everyone deserves to be treated with respect. Black, white, male, female, rich or poor, everybody was somebody in her eyes.”

Some argue that relying on memories of the past does nothing for your future. That is not the case for James and Stacey. It was the memory of his late

mother that helped James decide where to build Neuble Monument Funeral Home. “I could have taken the business elsewhere, but I wanted to bring it home, so much so that it is located right beside my mother’s house on Bluebird Road. Just being so close to where I grew up keeps her memory alive as well as keeping my family rooted in the community we all love. ”

NeubPhotos of James’ late mother, Joyce, like the ones pictured here, are showcased in the building to serve as a reminder that while she is not here in body, she will always in spirit.When James and Stacey decided to open Neuble Monument Funeral their goal was straightforward; create a welcoming and warm environment that everyone will feel comfortable in and educate those in the community on the importance of planning ahead. “Planning ahead is important in every aspect of living and also in death. We plan for everything from getting out of school, to working. We plan to purchase homes and cars. We plan to get married and have children.” James continues, “Then we plan on getting old by setting up retirement funds and IRA accounts, but we never think about our final plans until it is too late. Planning early will help ease the pain of loved ones often left having to make decisions that you could have made yourself. Often, planning ahead will also save you and your family money in the cost of your arrangements. And lastly, it will help ease your mind knowing that you will be taken care of at your time of death.”

With their first year of business in the books, James and Stacey agree that their success is due largely in part because of the location they chose. Stacey adds with a bright smile, “Serving people in Lebanon and surrounding counties has been a humbling experience for me. I have met so many incredible people that live right here in Wilson County.”

James and Stacey are proud to live and work in Wilson County and are excited about raising their 8 year-old son, Jase, in the community they have called home for so long. Stacey explains, “The neighbors are warm loving people, and it’s a safe place to live. The schools are some of the best in the state. And overall it’s just a very peaceful area of living. We couldn’t imagine living anywhere else.”

The Neuble’s have taken the memories from the past to secure a future for their family.

Stacey Neuble is a graduate of MTSU and Nashville School of Law and assists her husband as an unlicensed funeral assistant.