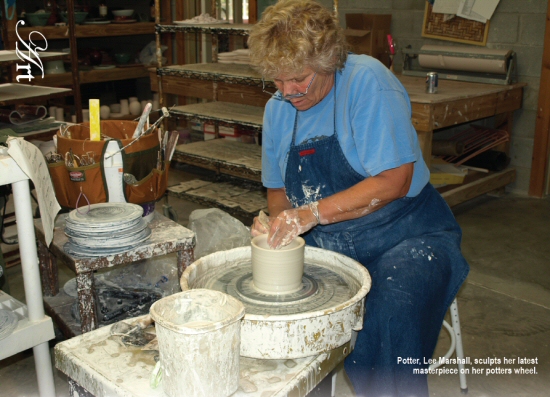 Nestled atop a hill on Chicken Road between Highway 231 and Trammel Lane, you’ll find Silver Ridge Pottery, home and studio of Lebanon transplants, Bill and Lee Marshall. The couple retired from corporate life 15 years ago and found a home and a haven in Pulltight, where Lee now spends most days enjoying her creative passion-turned second career.

From mud pies to pottery

Born and raised in Louisville, Ky., Lee obtained an undergraduate degree in package engineering from Michigan State University before earning her MBA from Keller Graduate School. She began her 30-year career in the medical and pharmaceutical packaging industry, engineering and designing packaging and products. She holds two patented designs for sutures, but if the excitement in her voice is any indication, the patents pale in comparison to her work on a shunt once used in an in utero procedure. “I helped design the shunt for a fetus with hydrocephalus, and it was so amazing to get to meet her when she was a toddler.”

Lee and husband Marshall—yes her better half is better known as just Marshall— spent most of their careers in Chicago, but did a brief stint in California in the 1980s. When they moved back to the windy city, they spent an afternoon wandering around their new neighborhood and stumbled onto an art fair. “The next thing I knew, Marshall had signed us up for art classes with a potter who was exhibiting there. He’d dabbled in pottery in college because ‘that’s where all the hot women hung out.’” But Lee was skeptical at best.

“At the time, I was the quintessential executive. I wore high heels and a suit every day. I got my nails done every two weeks, and there was no way I was getting my hands in mud, but I did acquiesce to go to the studio and hang out.

The people there were fun, and there was, at least, a bar next door frequented by one of my colleagues!” And so Lee was content to play the role of the social spectator, until one night the studio owner, Jill, convinced her to throw a pot.

“The first one wasn’t too bad, and the second one actually resembled a bowl. I was hooked, and two weeks later, I cut off my fingernails.” And so began Lee’s love affair with clay. In the years that followed, her art bolstered the pottery collections of her friends and family so much that Marshall says people started issuing them conditional dinner invitations. “They’d say, ‘come over for dinner, but don’t bring anymore pots.’” So with more pots to throw, but no one to give them to, what else was there to do but sell them? “Jill, the same potter who’d helped me throw my first piece, got me into an art fair, and people actually gave me money for the pots my friends and family wouldn’t take!

That’s when I decided to get serious about paying off our mortgage and exploring the idea of transforming my hobby into a livelihood. It’s kind of funny, really—I remember as a little girl how much I loved making mud pies, but how disappointed I was that they didn’t last. I guess I really never outgrew playing in the mud; I just took a detour through corporate America.”

A potter’s road to Pulltight

Pulltight is what Chicken Road natives, and even relative newcomers like Lee and Marshall call the small community where they live. Oral tradition suggests the colloquial nomenclature of the area in southeastern Wilson County comes from a long history of neighbors helping neighbors. When a neighbor is in need, the community ‘pulls tight’ together to help in whatever way they can. So how exactly did two Chicago executives end up in Pulltight?

In short, Smithville and a sibling. “My brother Billy has lived in Nashville for years, and I’d come down to visit him, and one time in the early 1990s, he and I were running the back roads and discovered the Appalachian Center for Crafts in Smithville. I ended up enrolling in weekend classes there – flying down here frequently with my Rubbermaid totes full of pots to fire in their salt kiln. Marshall took some classes as well, and we both fell in love with the area.” Considering early retirement, the Marshalls began to think more seriously about settling in Middle Tennessee. Lee says their criteria for a final home and some guidance from a local landed them in Wilson County. “Smithville was beautiful but didn’t have enough neon for me. All Marshall really needed was an international airport in order to continue his pharmaceutical industry consulting work, but I needed a little more, restaurants with tablecloths, a museum or two and maybe a few night hot spots thrown in for fun. So Billy connected us to a realtor in Lebanon, and in 1994, we found property in Pulltight, and it was perfect. There was enough acreage for a kiln that wouldn’t bother the neighbors, Nashville was only 45 minutes away, and unlike Chicago, we could count stars and constellations in a night sky unobstructed by city lights.”

The night sky isn’t the only thing Lee loves about Wilson County. “I love the people the most. We’re at somebody’s house for dinner, drinks, a game of cards or a bonfire every night. And you can’t go to the grocery store here without trading life stories with whoever is next in line. I just love that. And I love meeting people at the studio. If we’re there, we’re always ready to take a break and welcome a visitor. I tell people all the time to come on out and pet the dogs and sit on the porch, and I mean it!”

A labor of love

Although her work appears in dozens of galleries across the country, Lee remains committed to making art her customers won’t hesitate to use. “I make functional pottery. I don’t just want people to enjoy looking at my pottery; I want them to enjoy using it. Cook with it, eat on it, drink from it, and put it in the dishwasher!”

Today, Silver Ridge Pottery is filled not only with Lee’s work, but also with the creations of talented young artists she nurtures, employs and encourages, just as her first teacher encouraged her. “Over the years I’ve hired four emerging artists to help me in the studio—all on one condition. I insist that any artist working for me be working on their own art as well.” And that job requirement has paid off for those who’ve apprenticed with Lee. Joye Lyon Couts helped Lee get Silver Ridge up and running and now operates her own studio here in Wilson County. Several graduates from the Appalachian Center for Crafts have worked at Silver Ridge over the years—one now a potter in Chattanooga and another who’s gotten a number of grants to learn and teach the art form across the globe. And if you visit the studio these days, you’ll find John Sellberg at work. The nationally known potter balances working in the Lebanon studio with selling his pottery in juried art shows across the country.

For Lee, Silver Ridge is a labor of love. “This is definitely not retirement! If anyone had told me I would put in so many hours and so much physical labor at a job, I would have told them they were crazy! But pottery is my passion and my reason for getting up every morning. If I am at home, whether it’s Monday or Christmas Day, you’ll find me in the studio. I can’t imagine quitting.

Silver Ridge Pottery is located on Chicken Road. Just look for the custom tile-covered mailbox! When Lee and Marshall aren’t traveling, you’ll find them in the studio, but even when they’re away, the gallery is open most days.