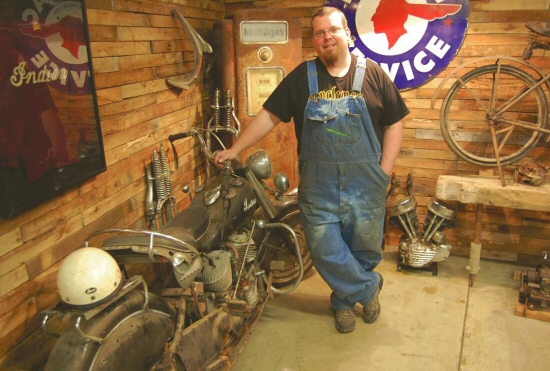 While walking around Cyclemos Motorcycle Museum, you might get the idea that owner-collector Mike Silvio is mesmerized by vintage American bikes.

Motorcycle mechanics Dave Wynn, left, and Mike Silvio, seen here with Mike Wolfe’s 1950 Harley-Davidson Panhead, can be found most days putting old bikes back in running order. The restoration shop is open by appointment only.Fact is, Silvio, who specializes in restoring and repairing old motorcycles, sees himself not as a hoarder but as a preserver of these amazing machines as well as a man who wants to share their history with the world.

“Who does this stuff belong to? It belongs to all of us. I’m taking care of it until it’s somebody else’s turn,” says Silvio, 39, who relocated his museum from Nashville to Red Boiling Springs in 2006.

“The American motorcycle played such a beneficial role in World War I. The motorcycle’s been around hard and heavy even that early in our history. There were hundreds of American marquees in the tens and teens. A lot of them fell by the wayside, especially in the late ’20s.”

Along the wayside, as well as on the World Wide Web, is where Silvio compiled his collection of approximately 50 antique bikes and hundreds of other artifacts such as helmets, leather saddlebags, vintage biking clothes, oil cans, advertising signs and vintage cycle parts that fill the museum.

The Chicago native says he found many of “the smalls” while combing swap meets, picking barns, poking through garages and chasing leads.

These colorful American Motorcycle Association pennants are among the hundreds of eye-catching pieces of motorbike memorabilia that will enthrall biking enthusiasts at Cyclemos Motorcycle Museum.“But back in the day when eBay was coming online, you could type in ‘antique motorcycle’ and a hundred items might come up. Type that in today and ten thousand items come up,” said Silvio, who was ahead of the pack.

The biking enthusiast has transformed his passion into a triple temptation for other motorcycle afficionados.

“It’s a museum with a gift shop and a restoration shop. We make sure there’s something here for everybody. It’s a museum devoted to how motorcycles affected our country’s history. It’s an education facility. We get school groups in here. We do our best when we’re open to the public to give little mini-tours,” he said.

Highlights of the museum include the Col. “Crash” Brown exhibit, which shows and tells the story of a Westmoreland daredevil, and a fresh exhibit of old bikes belonging to Silvio’s pal Mike Wolfe of American Pickers fame on TV.

He didn’t have anybody to keep all his old iron running, and not everybody works on this stuff either,” said Silvio, who can fix old bikes like Chet Atkins could tune and pick a guitar.

In 1944, the U.S. Army had 1,332 Indian 741 Army motorcycles built with a 30-cubic-inch engine and three speed transmission. The retail price of the bike was $366.“I love being in the shop with a wrench. There’s an art and a science into making this run right. The idea is you can come here, go shopping, grab a bite to eat, come back here, take a look at some old junk while we’re doing an oil change on your bike or putting tires on your bike.

“Now we’re putting our emphasis in the restoration shop. This is where Dave [mechanic Dave Wynn] and I live,” Silvio says about the long hours in the garage. “We do work for people all over the United States. They’ll ship us a bike or motor or transmission, and we’ll restore it.

“When you deal with antique motorcycles, you’re going to draw a certain type of person. We have people coming in from far away just to check out this junk, so it’s been good for Red Boiling.

“We bring a lot of people into the town, especially on the weekends. Last Saturday there were hundreds of people here, a lot from out of state. They’ve got to eat, they’ve got to get gas, they need a place to stay. That’s good for the hotels,” says Silvio, referring to the town’s three historic hotels, famed a century ago for the variety of “healing” waters from their mineral wells.

Eight years ago, Mike and his wife, Jen, a nurse, moved to Red Boiling Springs with their children Mac and Avery to raise them in a rural environment. At the time he was a landscape architect. So how did the Illinois native become a motorcycle fanatic?

“I got my love for mechanics and antiques from my dad and my late great uncle,” says Silvio, who became a motorcycle missionary when he enrolled as a freshman at the University of Illinois in Champaign.

“My parents never let me have a bike. The first thing I did was bought a bike. Then I started flipping bikes. I worked my way up to Harleys,” Silvio

The oldest motorcycle at Cyclemos is this 1910 Yale, originally owned by a man from Westmoreland, Tenn. The man and the bike are pictured in the photo beneath the bike.recollected. “I would buy a bike from a senior who was graduating and fix it up a little bit and sell it to freshman to make money.”

Once settling into a landscaping gig in Nashville, Silvio restored and flipped more bikes during his spare time, using the money he made to grow a collection that began with the 1936 Harley-Davidson Knucklehead that he inherited from his great uncle.

“I had all this junk set up in the lower part of a tiny garage in Nashville. People would come in and say, ‘Man, you ought to charge people to come in here.’ I thought if I established a reputation now for being the go-to-guy for old motorcycles, it would serve me very well later on in life, so that’s what I did.”

Silvio truly learned the tricks of the trade when he was befriended by a group of oldtimers in Colorado who used to tune bikes for the Harley factory
racing team.

“These old motorcycles, we love the hell out of ’em and ride ’em all over the U.S. You have to be able to work on them too, because they’re not like riding a late-model motorcycle. Personally, wrenching on a bike does the same for me as riding one does for the common guy.

Mike Silvio stands in front of the Col. “Crash” Brown hell driver exhibit. The late daredevil Brown, who lived in Westmoreland, Tenn., performed stunts and jumped bikes to please crowds long before Evel Knievel became a household name.“To know where all the sounds are coming from. To know where the click is coming from. To know where the ping that’s not supposed to be there is coming from, is what I was all about. I really wanted to know everything about it, every nut and bolt,” said the master mechanic and mastermind behind Cyclemos Motorcycle