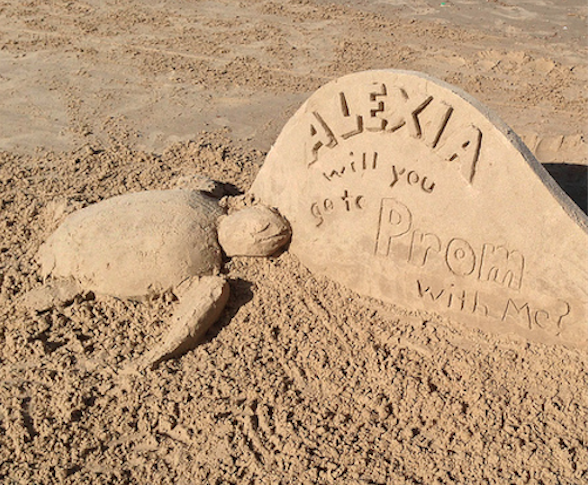 When my husband proposed to me, we were at Olive Garden. We had eaten there before. I loved their never ending salad bowl.

He asked me to marry him. I said yes.

He asked my dad. He said yes.

My dress cost less than $500. I found it at the first store my Mom and I went to. I don’t recall there being a second store she was going to take me to.

My cousins and I did our own hair and makeup. Big bangs and pink lip gloss, and we were good to go.

And then we got married.

So the fact that I’m having to deal with promposals, multiple dress shops, hair and makeup appointments, spray tans and dress fittings….all in the name of a school dance…is enough to make me want to say “no way” to the dress!

Maybe its because I went to an all-girl high school or maybe it’s because I was a completely awkward teenager who still had braces on her senior year, but for whatever reason, prom wasn’t that big a deal for me. This guy from the all-boy school asked me. I said yes. I bought a pink, tea-length taffeta dress. I never saw him again after high school. I heard he became a doctor. My mother still brings it up.

With one daughter thankfully done and in college, I’m on Round 2 of high school dances and proms. Round 2 is almost as bad as Round 1 except promposals now seem to have taken on a life of their own. Round 3 will be upon us soon enough as our son enters high school next year, and we will then become the parents of the one doing the asking. God help us all.

For those unaware, a promposal is defined by Webster’s Dictionary as follows:

prom-po-sal (noun) An elaborately staged request to be someone’s date to prom, oftentimes concocted by a 40-something-year-old mother whose husband proposed marriage to her at a chain restaurant. In an attempt to rewrite the past, she insists upon collaborating with her son and his prom date invite. The result is a fantastic proposal often accompanied with a lavish array of rose petals, banners, photographers and an audience of friends and family.

The last promposal we experienced consisted of a wonderfully orchestrated light display on our driveway, in the shape of a heart. In the middle were the words “will you be my date to prom?” all lit up. Rose petals were scattered throughout.

I looked at my husband. He shook his head.

“You said Olive Garden was your favorite restaurant!”

Thankfully for him, three kids and six promposals later, I think I’m about to have my fill of elaborate proposals.

Give me a lasagna, salad and proposal, and let’s call it a day!