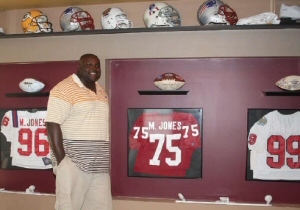 Mike Jones is a passionate man. He’s passionate about football, faith and especially family. He’s a regular guy. He’s just like most of us with a few minor distinctions. Okay they may not be so minor. The Mike Jones I’m referring to is a retired defensive lineman whose career in professional football spanned nearly a decade-a lifetime for a lineman- for teams like the Arizona Cardinals, New England Patriots, St. Louis
Rams and the Tennessee Titans where Jones helped carry the Titans to their first Super Bowl and assisted with their first AFC Championship.

Mike Jones is a passionate man. He’s passionate about football, faith and especially family. He’s a regular guy. He’s just like most of us with a few minor distinctions. Okay they may not be so minor. The Mike Jones I’m referring to is a retired defensive lineman whose career in professional football spanned nearly a decade-a lifetime for a lineman- for teams like the Arizona Cardinals, New England Patriots, St. Louis Rams and the Tennessee Titans where Jones helped carry the Titans to their first Super Bowl and assisted with their first AFC Championship.

With a professional resume that includes two Championship rings and two trips to play in St. Louis Rams in 2000 and with the New England  Patriots in 1996 when they faced Green Bay Packers), you might think that he would be a little intimidating but with his first interview in more than five years he proves that looks can be deceiving. His story goes beyond his glory days in the NFL. In fact, that is only a tiny piece of the puzzle that completes Mike Jones’ life.  Jones gets his athletic ability honestly. His father was a high school football coach for 33 years in his hometown of Columbia, S.C. And it was this sport where he and his father found a common ground and formed a bond that gave him the confidence to dream big.

“My dad instilled in me the belief that I could do anything I wanted to do if I worked at it hard enough. Working hard and not giving up helps me in every area of life, not just football. It’s helped me in business and especially family life.” In 1991 after graduating from North Carolina State-where he played on a full football scholarship, Jones was a second round pick in the NFL draft for the Arizona Cardinals and
played with that team for four years.

It was during off season in his second year that he met the woman who would one day become his wife, Javonda Floyd. And according to Javonda, they had more in common than a mutual attraction. “After getting to know each other we found out that his dad and my aunt taught at the same high school and our parents all attended college together.”

Just two years later in 1995, Mike and Javonda married and began what would be a very eventful life together. At this same time Mike was traded to the New England Patriots where he played under legendary coach Bill Parcels during his first year with the team. After three  dditional
years with New England, Jones was traded to the Saint Louis Rams in 1997. In the 1998-1999 seasons he went on to play for the Tennessee Titans in what would become his final year playing professionally.

Years of playing contact sports had taken a toll on his 30 year old body. “That last year with the Titans I missed four games because of knee injuries I suffered while playing in the NFL. When the season ended I knew it was time to retire. I couldn’t have picked a better note to leave on. After that year’s AFC Championship and that close Super Bowl loss I walked around on a cloud for two weeks. Nothing compares to that.”

There is one thing that Mike wants people to understand.

Contrary to popular belief playing professional sports is NOT all play. “The NFL is the most detail oriented business that there is in sports.” Mike explains that players aren’t just practicing a few hours a week in preparation for the week’s game. At the beginning of each week players are given between 600-700 pages of statistical information about the upcoming opponent and the players then spend the rest of the week dissecting that information in an effort to defeat the opponent.

“Enormous mental work goes into playing and young kids get caught up in the “glamour” of the sport in college ball. It’s just ten times more difficult in the NFL. When you step out on that field you’re playing against MEN who are trying to keep their jobs so you’d better be ready.” While Jones certainly learned a lot playing professional football it’s what he’s learned off the field that matters most to him. Mike and Javonda have four children; Steven, Courtney, Mike Jr. and Aja. And anyone who knows them knows how seriously they take their jobs as parents.

But few people know about how a young man entered their life and changed the dynamics of their family and their hearts forever. When Mike was playing for the Titans, Javonda worked with other players and coaches wives in the Titans Women’s Association doing service projects in the community. One day while working with the association a fellow member gave Javonda a fax. The fax, from the Department of Human Services, detailed the needs of an at risk youth in the inner city. “I talked to a social worker who said this young man whose name is Steven had been taken from his mother’s care because she was an alcoholic and an IV drug user and he was now living with his aunt.” Javonda added that at 6’4 and 185 pounds Steven stood head and shoulders above his junior high classmates. He needed clothes and the social worker who had contacted the Titans Association wanted to know if any player had clothing they could hand down to Steven. “I told Mike about it and that night we started getting clothes together for him.” While they were packing Mike said something that would change everything. “He looked at me and said ‘you know this kid is going to come and live here with us’ there was no question in his tone. Mike just knew without even meeting this boy that he was going to be ours.”

Mike and Javonda had always worked with inner city kids in every state they lived and knew first hand how bitter and angry these children can be but there was something different about Steven. “After all this child had been through he was polite and  gracious. He humbled all of us.” What started out as a gift of clothing evolved into mentoring, tutoring and several trips to see the Titans play. Shortly after their mentoring relationship began word came from Steven’s aunt who was a single mom- that she could not afford to feed Steven anymore and because of his size and lack of space in a traditional boy’s home, Steven would be placed in a facility for offenders. Javonda says, “They couldn’t find a foster home to take him in because of his size. He was intimidating. But if they would have let him open his sweet mouth they would have seen what we did.” The Jones were not going to let this happen.

“Courtney was two, Mike was one and all we knew to do was pray about it. We just couldn’t let him go. He was our boy now.” After many late nights talking, Mike and Javonda called social services and made them aware of their decision.

Little did they know moving him in was the easy part. “That first year was like having a new baby in the home. It was an adjustment. We had to hold him when he woke up crying.” Both Mike and Javonda agree that the hardest part for Steven was the guilt he felt over not being able
to take care of his mother. “He never had the chance to be a kid. He had been a caretaker. It was our job to help him through this and let him know we weren’t going anywhere and we were right there with him.”

Mike also makes clear it’s not just he and Javonda that helped Steven get through those first few months, “We are a faith based family so we showed him how beneficial it is to hand those fears over to God and when he did that we could see the light in his eyes again and man what a feeling that was!”

A lot has changed since that first year with Steven. Aja, the baby of the clan, was born in 2001. The family built their dream home in Lebanon nearly six years ago. Steven graduated from High School in Brentwood, Tennessee where  Mike coached Steven as the defensive line coach on the school’s football team. Coincidentally that was the year Brentwood High School won the State Championship against Riverdale High School. In 2007, Steven received his Bachelor of Science degree with a double major in Communications and Public Relations from University of Tennessee  Knoxville where he also played offensive lineman on the football team.

All four children love sports and Courtney-the oldest of the girls has shown some talent of her own on the football field when she had the opportunity to sing the National Anthem for a crowd of more than 40,000 people before a Saint Louis Rams game in early 2008.

Mike and Javonda make no bones about it, They LOVE Lebanon! And according to Mike the reason for their fondness of this community is quite simple, “it’s been a shock to us how much we love it here but it’s the people that make it home for us. They [the citizens of Lebanon] are great! They are the most kind and loving people you could hope to live close to. We’re just glad to be here.”