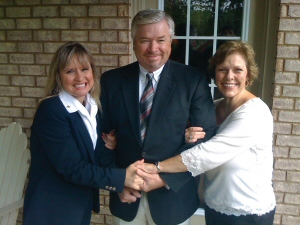 The morning began like many for the preacher. I had shaved, showered, packed and was ready to catch a plane home to Nashville. I had just finished an enjoyable four days of ministering in Michigan. Ron, Gene and Joe had welcomed me into their church pulpits. God had blessed in each service. It was great to see and preach to many men I’d come to know and appreciate at the Michigan State Minister’s and Laymen’s Retreat.

I boarded the plane and it pushed away from the gate. The pilot announced that our plane would need de-icing before takeoff. I had a short connection time in Chicago and was periodically looking at my watch as we waited our turn. Finally after forty minutes, we raced down the runway and were airborne.

The flight was uneventful but I had a nagging concern that I might miss the connection in Chicago. I exited the plane and quickly realized my next flight was on the opposite end of the airport. I almost ran to the other side of the airport. Ah…. Relief, the Nashville flight had not boarded yet. I had made my connection. I parked my computer bag, pulled off my winter coat, reached for my cell phone……. then woke up in the Emergency Room of Holy Cross Hospital.

I didn’t know where I was or what had happened. When I opened my eyes, seated next to me was a nice blond lady whom I did not recognize. She introduced herself as Rachael Jacobs and said she was a flight attendant from Southwest Airlines. She began to recount a story that was nothing short of a miracle.

Rachael was off duty and on her way to Nashville to visit her parents. She was making small talk with the desk personnel in the gate area waiting for the flight to board. A passenger came to the desk reporting a man sick and needing assistance. Rachael found me slumped over, eyes rolled back in my head and blood leaking from one corner of my mouth. Her Southwest training kicked in. She took charge, yelled back to the desk to call the paramedics and summoned the surrounding men to help her pull my wedged arm from between the seats. They moved my unconscious body to the floor. Thinking this was a diabetic seizure, the normal protocol was to lay the person on the floor and let his or her body recover on its’ own. Rachael did something that went directly against her training. She called for a heart defibrillator.

As she recounted this part of the story, a pause and sense of awe filled in her voice, “it was as though a voice told me – he needs the defibrillator, he’s having a heart attack.”

There happened to be a doctor and ER nurse also waiting in the gate area on their way back to Nashville. It took about fifteen minutes for the paramedics to arrive and the shock to my heart to be applied. For fifteen minutes my brain was deprived of oxygen and my heart had stopped. For all practical purposes I had died. CLEAR….. The electric shock jolted my body….. no pulse. CLEAR a second time….. The electric shock jolted my body again leaving small red burn circles on my chest, but they had a pulse. I literally had come back from the dead. Rachael thought I was dead. She didn’t understand it, but felt impressed to go to the hospital and stay until my family could get there. She sat with me for several hours until my wife and children arrived.

“Reverend Harris, you should not be here, you should be in the morgue” or similar words to that affect. You don’t smoke, drink, no blood pressure issues, not obese, no cholesterol problems, overall – you are in good physical condition. You have what is called the widow maker. You’re like an athlete who runs every day and is found on the side of the road dead of a heart attack. No apparent symptoms yet major heart issues are present. The main artery feeding the left side of your heart is 99% blocked. You also have another artery 90% blocked, two 70% blocked and another 30%, 5 blockages in all. You’ll have to lay perfectly still through the weekend to gain some strength and we’ll perform bypass surgery on Monday.”

The surgery was performed and was successful taking only 3 of the normal 6-8 hours. The report was great and by evening the respirator tube had been removed and I was sitting up and eating jello. By Saturday I boarded a plane back to Nashville.

I met four days later with my new Nashville cardiologist. After looking at my heart from every angle, the doctor could hardly believe what he’d found. Absolutely no damage to my heart! No heart rehabilitation therapy was needed! Nine days after surgery and I was far along on my road to recovery. He even allowed me to travel three weeks later alone to California and speak at the California Free Will Baptist State Men’s Retreat. God blessed and we saw 6 men saved and several other decisions for Christ.

I know you’ve just heard quite an unusual story. God truly performed a miracle. What makes this a miracle? First of all I normally have direct flights to and from Detroit but this trip called for a divine connection in Chicago. Second, Rachael Jacobs, a Cardiologist an ER nurse all were divinely selected and placed on my connecting flight in Chicago. Third, God timed my heart attack perfectly on the ground rather than on a plane. Fourth, a Jewish maiden obeyed the Spirit of God and deviated from standard procedure to deliver a shock that saved my life. Fifth, I suffered no permanent heart or brain damage despite being deprived of oxygen or blood flow for over fifteen to thirty minutes. Sixth, my recovery fast tracked to flying across country and preaching three sermons in two churches and four sermons at a state men’s retreat in less than five weeks from the day of the heart attack. Finally, God has used this episode to touch countless lives through a Southwest Airlines national radio interview. (www.blogsouthwest.com/podcast?page-9 Title:When Rachael Met Roy), a USA cover story (www.usatoday.com/money/industries/travel/2009-10-05-flight-attendants-medicalaidn.html) and countless opportunities to share with individuals and churches across America.

I didn’t see a bright light or travel down a dark tunnel. One thing I do know for sure. I experienced the protecting, guiding hand of the Lord. I never feared death and felt His divine peace that passes all understanding. Take it from one who truly has passed from death unto life, not only spiritually but in my case physically as well. Every good and perfect gift comes from the Lord. Life is a precious gift. Cherish each day and live it like it might be your last. One of those days will be. If you have doubts, just remember God’s Miracle in Chicago.

Roy W. Harris is a national conference, seminar and retreat speaker, minister, published author and journalist. He can be contacted by e-mail at roy@ royharris.info. This e-mail address is being protected from spam bots, you need JavaScript enabled to view it or visit his web site at www.royharris.info.