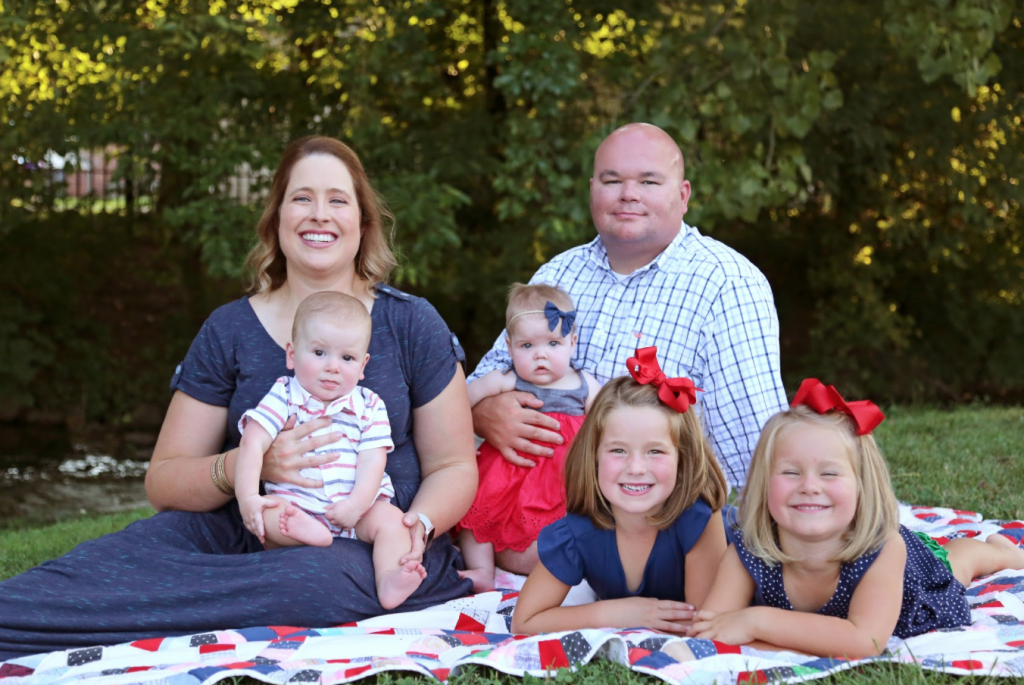 Family’s journey takes them in an unexpected direction

Wesley and Randi Binkley watched their two daughters, Evelyn, 4, and Eleanor, 2, peer at the rabbits and ducks at the Wilson County Fair animal exhibit two years ago when they got the phone call.

The couple loved being parents and wanted to give Evelyn and Eleanor a sibling to round out their happy family. Both had come from families with multiple siblings.

“It was my doctor on the phone,” Randi recalls.

The deflating and life-changing news blurred Randi’s vision and caught her breath. She was just 35 years old.

“He gave me the results of all my lab work and basically told me I would not be able to have another baby because I didn’t have any viable eggs left,” Randi says quietly from her home in Lebanon.

That phone call two years ago came in the midst of Randi and Wesley’s attempt to become pregnant with their third. The disappointing news propelled a quest that led them to a successful option to fulfill their desire to complete their family. They chose an option few understood or discussed.

“For some reason, infertility is not talked about,” says Randi, a certified nurse anesthetist at Lebanon’s Tennova Hospital. “Woman and men feel somehow ashamed or inept if this issue arises. It’s painful.”

She wants to debunk this, open a conversation and share the option they chose to expand their family when it could not happen the natural way.

While Randi works at Tennova, her husband is in real estate at Remax Exceptional Properties in Mt. Juliet. They celebrated their eighth anniversary in October. They moved to Lebanon three years ago from Davidson County, simply because they love Wilson County. Randi recently transferred to Tennova after nine years at Centennial Hospital in Nashville. Today, Evelyn is 6, Eleanor is 4 — and brother and sister Wynn and Elise are 10 months old.

The couple’s passage to an expanded family is detailed and arduous, but there are several highlights they want to share. They never had trouble conceiving with their two girls, and after about a year, they decided to round the kids out to a trio.

“We really didn’t think much about any problem,” Randi recalls. “But I learned at age 35, fertility drops quite significantly.”

After no success in about two months, they felt a niggling and started to pay more attention. “I knew if it didn’t come quickly for me, something might be wrong,” Randi says.

They were both tested for fertility, and Randi was told she was the “issue.”

“Yes, it was difficult to swallow,” she says. “They said I had premature ovarian failure. Basically, I was menopausal. I was emotional, and I got into that wrong mindset that as a woman you should be able to get pregnant.”

This is when their road to pregnancy began. It was bumpy, scary and eye opening. Randi went through five IUI’s (intrauterine insemination), which is a fertility treatment that involves placing sperm inside a woman’s uterus to facilitate fertilization.

The doctor gave them a generous 25 percent success rate for conception with this.  It was the same with IVF (in vetro fertilization), which is an assisted reproduction technology and process of extracting eggs, retrieving a sperm sample and manually combining them in a lab dish. Then, the embryo is transferred to the uterus. But, Randi was not producing viable eggs anymore.

Another option was an egg donor where a random female donates eggs, usually for money, and they are combined with the husband’s sperm.

“We already had biological children,” Randy said, and they rejected this option.

They thought of traditional adoption, but it’s extremely expensive, up to $50,000. They thought this could have a lot of potential heartache if the mother decided to change her mind.

Randi had a chance encounter with a woman on Facebook from Memphis who had a daughter through embryo adoption. Randi connected with a support group, learned more and then asked her doctor about it. He connected her to Nashville Fertility, which is the largest clinic in the Nashville area. They went to the facility’s embryo adoption program.

Randi and Wesley loved this option that implants a donor’s embryo into her uterus, and if it attaches, she would carry the baby full term. It was a fit for Randi because she loved being pregnant and felt carrying a child would bond her to the baby. There are more than 600,000 embryos preserved in Tennessee. Most come from couples who were successful in IVF and chose to donate their remaining embryos for those who wanted to adopt.

The couple waited five months on a list and then got to the top and were given 10 profiles. Since they already had biological children, they did not concern themselves with trying to find a match that resembled them.

It was suggested they choose two, in case one failed. They choose one genetically tested male embryo that had been frozen five years and one highly successful embryo that was frozen for 15 years. Each embryo came with a general profile of the donors for medical reasons and general information on the donors.

The two embryos were thawed and transferred to Randi’s uterus on May 2, 2016, and four days later Randi was already experiencing nausea, which was a terrific sign.

“I never felt so sick when I was pregnant before,” Randi says with a smile.

The doctor confirmed their pregnancy with two babies, and it was a bit rougher because it was twins and she was older. They say they both secretly hoped both embryos were viable and broke into tears when they realized they had two babies.

Ironically, though not biological, they both look like their parents, with Elise taking after Randi’s blue eyed, blonde features and Wynn after Wesley’s darker features. People are astounded when they learn about the embryo implantation. The cost of the adoption was about $7,000 and another $1,000 for special medication.

At 11 months, Wynn is high strung and all boy, and Elise is “chubby with fat cheeks” and loves to smile.

Because of other couples’ generous donations, Randi and Wesley now have two beautiful babies. Also, full circle, because Randi could not produce enough milk to breast feed, she connected with a wonderful group where mothers donate their extra breast milk.

“I know,” Randi whispers. “Other people have given us so much.”

Mom and dad are adapting happily to their new normal with four children. It’s their dream. It’s busy with a lot of give and take and little sleep. But, they say it’s miraculous.

“Embryo adoption is a wonderful option not a lot of people research,” Randi says quietly as she looks at her twins asleep. “I want people to know being infertile is not a failure. It’s life, but there are options. If I had to walk this road again in order to educate people, I would. I’m okay I walked the road and got to the other side.”