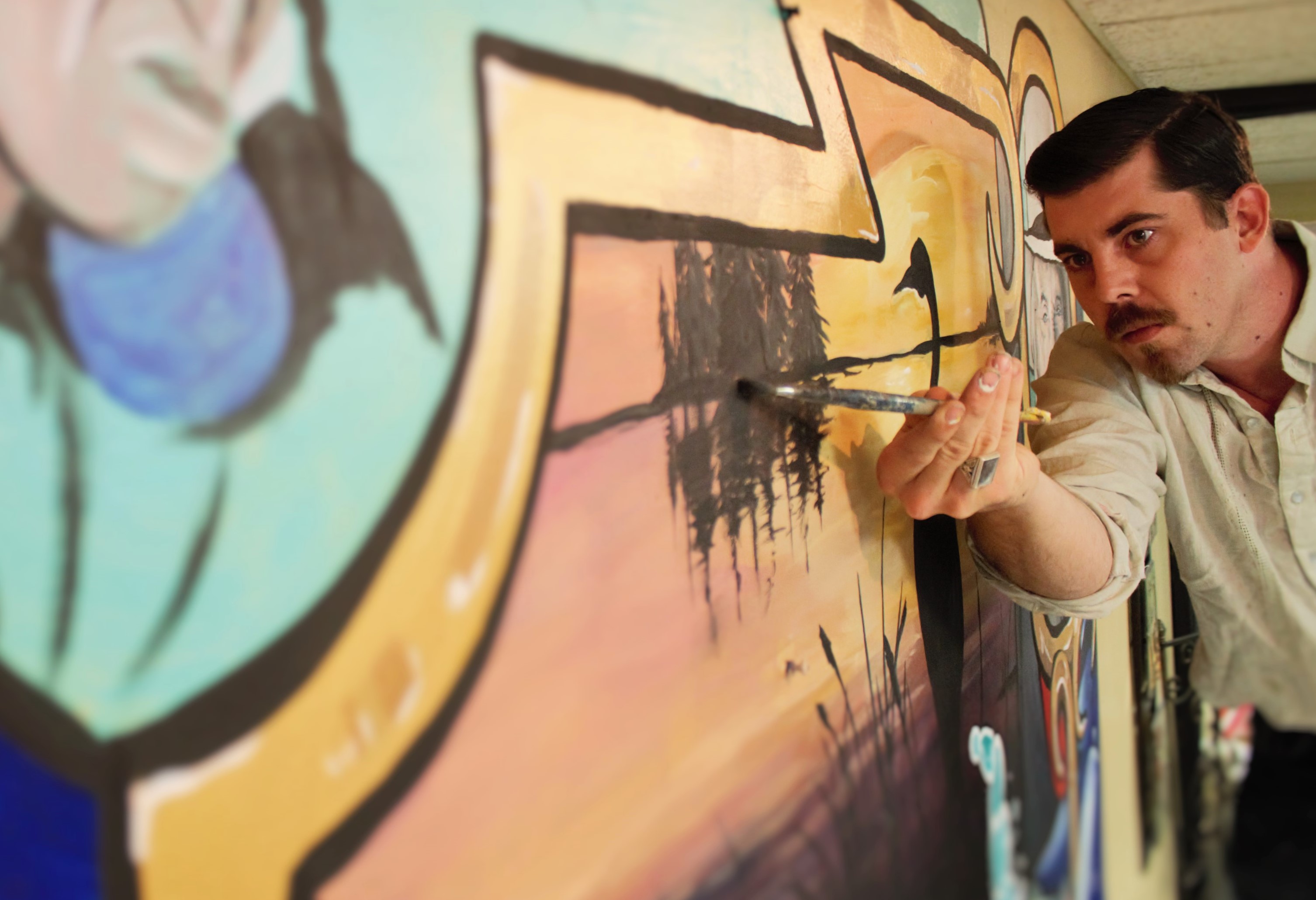 In jeans, cowboy boots and well-worn cowboy hat always within reach, he worked many days and well into nights with paintbrush in hand.

Oftentimes Jeremy Simons was alone past midnight, dipping his brushes into the paints. At times hunched over, and other times stretched high, the artist lost himself in his project. One stroke at a time, a large-scale mural slowly emerged on a most unlikely canvas, at a most unlikely place. That canvas was a bare concrete wall in the main entrance to Mt. Juliet City Hall.

With each stroke the wall transformed into a vibrant one-of-a-kind homage to Mt. Juliet. Out of nothing, with just paints and a natural born gift, Simons, 33, brought to life locally known Mt. Juliet images of iconic country music artist Charlie Daniels, the commuter train, a local lake with a crane, a large-mouth bass, a Native American Pow Wow dancer and the city seal.

“I just wanted to represent Mt. Juliet and these images show how diverse the city is,” Simons said.

It took Simons about a week and a half to complete the mural that has the community in awe. City Billing Manager Wayne Griffin said he was mesmerized as he watched the veteran artist work.

“It was fascinating to watch,” said Griffin, who sits directly in front of the 5-foot by 12-foot mural. “It would be just blank, then all of a sudden a train would appear and then a fish would appear and I thought ‘how can anyone do that?’ The citizens are just blown away by it.”

Nationally known for his mesmerizing, massive inspirational murals created within minutes with his bare hands to music performed by his wife Lydia’s band, Lydia Brittan, Simons is used to large-scale painting.

For a decade he toured the country, mesmerizing audiences as he poetically painted giant images of Christ with in mere minutes.  Up to 250 shows per year, he drew crowds awed to see his strokes of inspiration.

‘Art is mirror to heart’

An ever-evolving artist, Simons now has dialed back the tours. His wife, who is a singer and songwriter, has as well and now is recording an album. The creative young couple moved to Mt. Juliet a year ago and Simons is concentrating on fine arts nearly full time. He is working on a new body of work with a Native American influence, among many other projects. He’s from West Virginia and his heritage is of the Powhatan tribe.

Simons was raised in the Appalachian mountains of West Virginia, home to the Powhatan, a Native American people from that general area. It is estimated there were about 14,000 to 21,000 Powhatan people in the early 1600s. Today there are less than 3,900. It is, in part, because of this Simons wants to pay tribute to his heritage with his “American Realist” paintings.

“The heritage of my family has been some of my greatest memories,” Simons said.  “Dancing at a Pow Wow with my brothers and grandmother has been a lasting impression in my mind. Tribal heritage is one of great sorrow and triumph, but most important it is a lifestyle of family. The native heritage shared by our people is one of great beauty, and as an artist, I see the artistry in song, life, and even regalia. Everything has a story and a purpose, and if I can share that through my art, it is an honor.”

The evolution of an artist

Simons said he’s self-taught and started drawing in the first grade. He has a natural talent, as did his father. However, he said his dad never really made money with art.  Simons turned down 17 full-ride scholarships to art schools and instead went to Bible college. He laid his art aside and worked in the ministry full time. He did, however, illustrate his sermons. He then had dreams of painting live on stage.

“I knew what I was supposed to do was art,” he said. “It was liberating and terrifying.”

His performance art skyrocketed and his career emerged with the tours. Now, there’s a new chapter in his life as he works nearly full time creating and selling his artwork. He’s inspired by his Appalachian upbringing in the mountains that have inspired his love for the American frontier and the nation’s first people.

However, along with progressing his career full time, he plans to devote a lot of his time to “beautifying” Mt. Juliet with his murals. Simons said when he and Lydia moved to Mt. Juliet they “loved the area and the people.”

“We feel there is so much potential here and we feel this is a great destination for musicians and artist,” he said. “We know there’s a great Shop Mt. Juliet campaign, but feel maybe the artisans’ side is not quite developed.”

This artist decided to take that mission on himself.

“Why wait for other artists to do it?” he said.

The initial prong to that mission is his donation of his murals to the city. Along with his completed mural at City Hall, Simons is in talks with City Manager Kenneth Martin about painting murals on a couple walls at the police department and has a four-year plan to paint all the traffic control boxes at traffic lights. There are also plans to expand the entrance to Charlie Daniels Park and he’s talked with Martin about painting murals on that as well.

“I think it will bring an art presence to Mt. Juliet,” he explained.

“Mr. Simons is a wonderful young man I met through a mutual local artist friend,” Martin said. “When he showed me some of his artwork I was totally blown away by his immense talent and many, many God-given abilities beyond just drawing, sculpting and painting.”

Martin said he was even more impressed with Simons’ “character and sincere desire to give something back to Mt. Juliet and its citizens.”

“Jeremy is so talented and we are all so very thankful to him for making this wonderful mural a reality for the city. I’m hopeful that other talented artists like Jeremy are able to create a true place to showcase their talents here in Mt. Juliet and Wilson County.”

An artist’s dream for Mt. Juliet

Simons hopes so too. He has big dreams for Mt. Juliet.

“This generous city is growing,” he said. “My personal goal is to have an art district with shops and studios. I want a huge art presence here in the city and if I can start by bringing awareness it can only grow.”

He said he knows numerous other artists who reside in Mt. Juliet.

“I feel good, why not give it a little push, and bring interest?” he said.

From the traditions of old masters to live rapid strokes at his stage shows, to donated jaw-dropping homage murals to the city he now calls home, Simons continues to astonish and mesmerize his audience.