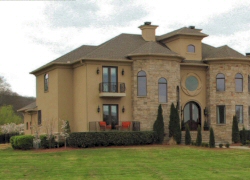 Unless you’re looking for the home of Dr. Scott and Jean Ellen Baker, you’ll drive by it, day after day, and never knowits there. And that is perfectly okay for

this busy family, as their home is an oasis from their hectic lives.

The Bakers stumbled upon their home in the spring of 2011, when they were hiking through the woods near their old house and came upon this one, in a clearing. “We had no idea it was even back there,” noted Jean Ellen, who loved the house from the first day she saw it. “We did a little research and found out it was for sale! I was so excited because we loved the location, the style and the land that surrounded it.”

After much consideration, they decided to take the plunge and since that time have been transforming the home into their private haven.

The Mediterranean inspired retreat was built by local contractor, Cliff Carey, who is married to FCS third grade teacher, Cathy Carey. As luck would have it, Cathy taught all three of the Baker children. “It was comforting to know he had built it, because I knew him to have an outstanding reputation,” explained Scott. And while the home was already gorgeous, Jean Ellen, with the help of contractor, David Butterworth and friend, Caroline Walker, set out to make it her own, which meant bringing in a little Kentucky charm into this European flavored home.

The home sits on over 30 acres with a winding half-mile driveway. Jean Ellen relayed that “it’s tucked away, and that is so different from where we were living. We used to live in a subdivision, which was great because the kids always had someone to play with, there was always a neighbor checking on us, or waving as we walked the dog. So it’s taken a little getting used to, not having neighbors around us.”

They say the first impression is the lasting one and there is nothing as breathtaking as driving up the wooded driveway to find this expansive home, perfectly positioned in the clearing.

The home consists of the main house, a guest house over the garage and the recently added pool house. A tennis court was also added as the family are avid tennis players.

As you walk up the newly constructed front walkway, you come upon the nine foot solid mahogany front doors, that open up to 23 foot ceilings and mahogany

pillars. The back of the home is almost all wall to wall windows, keeping everything bright and open.

The Bakers’ two daughters have their own separate sanctuary upstairs, which means their son can have his own space downstairs. “One of my favorite additions to the house was our closet,” Jean Ellen mentioned. “When we moved in, the closet was here but it didn’t have the shelving. That was one of the first things I added. And I love having a place for everything.

Another feature we added to the master bedroom was the mantle over the existing fireplace and the sconces. Both are from the 1920’s.”

Jean Ellen is an avid decorator. Always on the hunt for something unique and different, she loves to peruse antique stores. However, she is not one of those ladies who lets the designer make all the decisions. Jean Ellen has a truck with a trailer and if she sees something she likes, she will drive wherever it may be, and haul it back herself.

Another addition to the home is the stone surround around the fireplace in the living room. The home has three fireplaces but Scott’s favorite is the one in the

living room. “Jean Ellen drove all the way to Tullahoma to pick up the stone and bring it back. We also added the mantle. Jean Ellen bought the sectional when we moved in and it’s the perfect place to hang out with the family in the evenings.”

Recently, the dining room has been repainted courtesy of a designer, Laura Lee Gassie. In fact, Laura Lee has helped the decorating flow throughout the home. As Jean Ellen explained, “she convinced me to paint the walls dark and the ceiling copper. I wasn’t sure I’d like it but it actually makes everything stand out more, especially the chandelier.” The kitchen off the living room is another family favorite.

“I love that we can all be together. I can be in the kitchen with Scott and the kids can be watching television and we can all still talk.”

“The room, however, most people seem to like the best is our mudroom,” joked Jean Ellen. “When we moved in, it was just a big room without shelving or cabinets, just a hook up for the washer and dryer. So I looked for the perfect design, drew it out and asked David to build it for me. And he did it all, cabinets and everything, and it’s just perfect. It’s usually a huge mess as the kids come in and dump all their rackets, book bags and shoes here, but it’s so nice to have one place for all of that.”

French doors lead off the back of all the rooms to the travertine porch and the porch leads onto the newly redone back yard. “Clyde Roundtree and Minchey’s helped us redesign the backyard and built the new pool house,” Scott noted.

“The pool was here but it had fencing around it and was also damaged, so we had Backyard Living come in and help bring it back to its original, sparkling

blue. Then we took down the fencing around the pool and everything just opened up. We really tried to make sure that the pool house exterior matched the original home’s exterior and I think they did a great job. Right now, Sam Mitchell is putting the finishing touches on the landscaping and we will be almost done,” Jean Ellen exclaimed.

The other major addition the Bakers have worked on since moving in, was the guest quarters over the garage. “Our families visit a lot and we wanted them to feel comfortable and have their own space. It’s also where we have our exercise equipment and the place the kids sometimes have sleepovers. We like having extra space for all those things.”

“The Patrons’ Party is going to be our first big event at the house. We’ve had friends and family over for small gatherings but with all the construction the last two years, different areas have been in transition during that time. We were asked to host the event and as supporters of Cumberland, were glad to do it. Since the day we agreed to host the event, I’ve made sure to step up and finish all the projects, which makes my husband happy, because I always seem to have a project,” Jean Ellen remarked.

What’s left to add to their retreat? “Well, with three kids, one dog, two cats, four chickens and a rooster, something is bound to get messed up soon,” laughed Jean Ellen. “But, actually next on my agenda are some raised beds and maybe a barn.” This will compliment the chicken coop that they now have. “I’ve always wanted chickens because my grandmother raised them,” smiled Jean Ellen.

“And you, Angel, kindly shared three of your chickens with us when we first moved in.”

“Unbeknownst to us all, though, that is when the chicken debacle began. Just a few weeks after adopting them, one by one they started disappearing. I would buy more and then they would disappear. Until one day I caught a dog taking them down! That’s when Scott and Noah went about building me a world class chicken coop and chicken run that is dog proof. We have two Barred Rock hens, two Americauna Hens that lay blue eggs and one lazy rooster. And I can honestly say, since moving into their new coop, they appear much less anxious!”

Scott and Jean Ellen’s home could easily be found sitting on a bluff overlooking the Mediterranean but the Bakers couldn’t be happier, that instead, it’s in Wilson County. “We love it here. We’ve lived in Lebanon for almost 15 years and have really made this town our home. While we’re close to family in Kentucky and the bright lights of Nashville, we’ve found our little piece of the good life right here…chickens and all!”