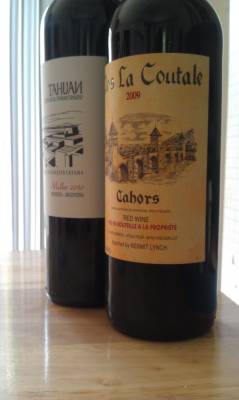 Malbec Throwdown We had a lovely French Malbec blend at dinner two nights ago on vacation that was the inspiration for this blog and consequential “Malbec tasting throwdown”. I have had many Malbecs from Argentina and surprisingly few from France where Malbec has its’ beginnings as a lowly blending grape. Times have changed and Malbec has come into its own, the shining star, premier grape in Argentina, particularly Mendoza.

The grape was first introduced to the region in the mid 19th century when provincial governor, Governor Domingo Sartiena instructed the French agronomist Miguel Pouget to bring grapevine cuttings from France to Argentina. Argentine Malbec wine is characterized by its deep color and intense fruity flavors with a velvety texture. While it doesn’t have the tannic structure of a French Malbec, being more plush in texture, Argentine Malbecs have shown aging potential similar to their French counterparts. The Mendoza region is the leading producer of Malbec in Argentina with plantings found throughout the country in places such as La Rioja, Salta, San Juan, Catamarca and Buenos Aires.

In France, Malbec has an identity crisis. It traditionally was grown in 30 provinces, according to the Oxford Companion to Wine (a.k.a. “The Great Big Book of Everything”). And it had almost as many names. In the Loire Valley, it is known as cot but plays second fiddle to Cabernet Franc; in fact, maybe fourth fiddle, behind Gamay and Pinot Noir as well. Its most hospitable ground is in Cahors, midway between the Atlantic and the Mediterranean, where it traditionally was known as auxerrois, an unfortunate name that can only be pronounced correctly when coughing up a hairball. Although the grape orriginates in France under several names, Argentina is foremost and reknown for Malbec. The country grows 70% of the world’s Malbec. So the winemakers of Cahors responded to Argentina’s success by embracing “Malbec” as the name of their grape and displaying it prominently on the label. They also have increasingly bottled their wines as 100 percent Malbec, though the appellation laws allow some Merlot and Tannat in the blend. The same thing has happened with Chardonnay. As a result of this new marketing emphasis by Cahors, we have a wine throwdown of sorts.

On beach vacation with a friend (who certainly loves a good throwdown) we bought a couple of bottles. This is a tremendously fun way to explore wine. The french wine is a Kermit Lynch wine, a Cahors consisting of 80%Malbec and 20% Merlot. I was not sure about it the first time I had it and figured a second time would seal the deal, good or bad. The Argentinian wine from the well-known Catena family of wines. Both wines were the same price, $15.99. Argentina tends toward a polished New World style, with new oak prominent to varying degrees and what I call “disappearing tannins,” by which I mean you can sense them in the inherent structure of the wine but you don’t necessarily feel them on your tongue and teeth. My friend preffered the wine Argentina citing the cherry properties. The French expression, on the other hand, is more earthy. The nose had the barnyard thing going which I loved while my friend disdained. New oak is not as prominent (and I hope the vignerons of Cahors don’t change that). The flavors and textures are a bit more rustic and chewy, and they often get even better a day or two after the cork is pulled. Cahors somehow combines a hint of Bordeaux-like class (the Atlantic influence) with the ruggedness of warm-climate wines from the Mediterranean. So, basically if you like a “New World” feel to your wine, an Argentinian Malbec might be for you. The Cahors is for a French wine lover, someone who appreciates a more “Old World” style wine.

Malbec makes a very food-friendly pairing partner with its concentrated black cherry and blackberry fruit components, fig-like flavors mocha and mineral notes along with a unique gamey quality that often rolls out with smoke, pepper and tobacco spice. From roasted and stewed beef or game to braised lamb, sausage, mushrooms, and spice-laden sauces, Malbec has the versatility and spice-affinity to handle a stunning array of food combinations and ethnic cuisines.