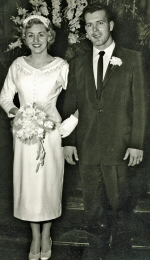 One hot summer night in 1949, fourteen year old Bettye Oldham was skating at the Madison Roller Rink. Bettye was a beautiful young girl and well experienced skater. While skating toward the front of the rink, she noticed several young men watching people skate, one of which was the best looking guy that Bettye had ever laid her eyes on.

He had on a pink knit shirt, a great tan and dark curly hair. She noticed he was watching her skate as she was checking him out. Her friends told her that he was Harold “Buddy” Gaines, a football, basketball and baseball star from Dupont High School. Buddy was 18, had just graduated and was attending Murray State University on a football scholarship.

As Bettye anxiously skated around to the front of the rink, Buddy motioned for her to come over where he was. In a deep southern voice, he said, “You sure are cute, how old are you?” Bettye replied, “fourteen.” He then said “Here’s a nickel, when you get eighteen give me a call.”

Bettye and Buddy were attracted to each other but the age difference kept them apart. Instead, they just became skating rink friends. Later, Bettye told her mother that she would marry Buddy Gaines someday.

One year later, in 1950, Bettye and her family moved to Chattanooga, and Buddy continued his education and played football at Murray State University. Five years later, Bettye had graduated from high school and was modeling, while Buddy had graduated from Murray and was drafted into the Army. Bettye and Buddy often thought of one another through the years, but had not talked since the hot summer skating nights of 1949.

One day while driving through Chattanooga, Buddy looked Bettye Oldham up in the phone directory, called her and paid her a visit. The love connection was immediate for both, and they continued to correspond long distance through letters and a few dates here and there for the next year.

In 1955, Buddy was holding Bettye’s hand at a drive-in restaurant when he took her class ring off and placed a diamond solitaire on her finger. They married February 26, 1956.

“We feel that it was God’s plan for us to meet again after all those years,” Bettye said in her sweet, southern lilt. “He has truly blessed us with fifty-five wonderful years.” They raised four Dupont HS/Vandy/UT athletes: Greg, Jeff, Chris and Brad Gaines, 13 grandchildren and one great grandchild.

Bettye and Buddy lost their precious first son Bucky (Harold Graden Gaines Jr.), at age three and their courageous grandson Graden Gaines of Mt Juliet, at age 14. The Gaines family's faith in God has helped them through these two tragedies.

Buddy, 79, is retired from the Old Hickory Dupont Plant. Bettye, 75, owned the Hermitage Antique Mall for 27 years and has been actively conducting estate sales for 40 years.

Bettye and Buddy reside near Old Hickory Lake in Wilson County. They also enjoy relaxing at their vacation cottage in Clearwater, Florida.