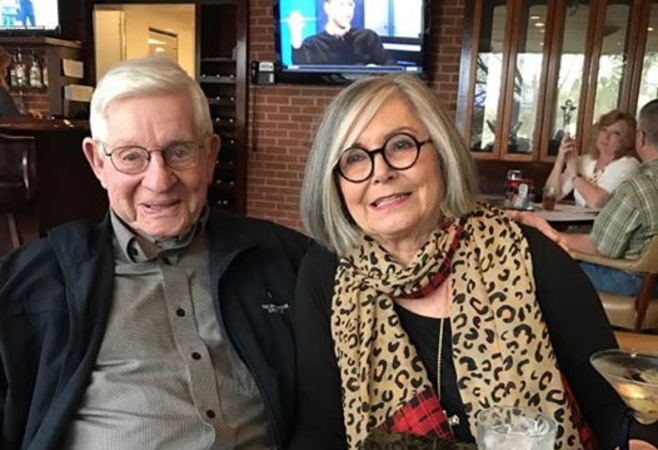 He helped America redeem itself in the Space Race, and she’s lived in two countries and six states. But they found a new piece of the good life, and each other, in Wilson County, perhaps when they least expected it.

Charlie Bradshaw, the rocket scientist next door (more on that later), and his charming wife Loyce call Geers Place home now. And if you ask them how they got there, they’ll tell you about one amazing adventure after another, each of which brought them closer to “home,” landing them right where they belong.

Starting another chapter
Married now for two decades, Charlie and Loyce weren’t looking for love after their spouses died. He was considering a move to Florida, where his Lebanon friends feared he was destined to become a drunken beach bum. And after a lifetime spent moving from city to city with her military husband, she was reconnecting with a sister who’d settled in Lebanon.

That sister, Joyce Badger, was the common denominator.

Joyce and her husband, dentist Bob Badger, had come to know and love Charlie as a neighbor and had for months pleaded with him not to move from his farm on Cedar Grove Road. Instead, they, along with a bevy of friends encouraged him to find a companion after his wife died.

Loyce recalls how her sister and brother-in-law were always having Charlie over for dinner, begging him not to move and telling him he needed to find “a nice lady to go out to eat with.”

One night at a dinner party an exasperated Joyce said to Charlie, “well if ever you were going to date someone, what kind of woman would you like her to be?” And just to shut her up, Charlie said, “I’d like her to be just like you.” He didn’t expect her to call his bluff. He didn’t know she had an identical twin.

Naturally, Loyce was invited to the next dinner party, and she says Charlie was willing to see her again because she had ties to somewhere he’d never visited — Alaska.

“He latched on to me because I’d lived in Alaska for nine years. He’d never been there, and he was fascinated by it.” The scientist in him couldn’t resist hearing about continuous daylight and what life was like for this widow who spent nearly a decade there with her late husband of 31 years.  Turns out, he couldn’t resist her either. The rest, as they say, is history. And Charlie finally made it to Alaska, several times in fact. Two of Loyce’s children still live there.

The couple is grateful for the good life they’ve found and the new chapters of life they’ve written together since that dinner party. They’re also thankful their families blended well. Both had grown children when they met, and Loyce remarks, “So many times marriages with grown children are tough, but his children loved me and mine loved him from the very beginning. We’re one of the lucky ones. We’ve been married nearly 22 years, and it’s been a great marriage, even though I didn’t want to get married.”

For two people who didn’t want to get married again, they surely make it look like it’s worth the trouble.

The rocket scientist next door
Before meeting Loyce, Charlie had plenty of adventures of his own.

He had enlisted in the Navy and entered the V-12 program for training and was taking Calculus at Sewanee. In a meeting with a professor, the professor began by going over the details of Charlie’s C average but quickly put his grade book aside. This was not a meeting of condemnation. Rather, it was a meeting of encouragement. He saw Charlie’s talent and encouraged him to think about mathematics as a career.

With that nudge, a lifelong love of mathematics began.

Charlie finished the V-12 program and was shipped to the Pacific Theater of World War II to prepare for the invasion of Japan. He saw action at Okinawa but, like thousands of America’s enlisted men, was spared the dangers of invasion when President Harry Truman ordered the use of two atomic bombs. Six weeks later, Charlie found himself walking through Hiroshima, the first city hit with an atomic bomb. Asked what he thought as he took pictures of the carnage, Charlie recalls, “we can’t have another war with these weapons.”

After the war, Charlie completed school and joined the faculty at Tennessee Polytechnic Institute and settled his family in Cookeville. In 1951, a new opportunity arose in Huntsville, Ala., that took Charlie into the world of Wernher von Braun, the German rocket scientist who surrendered to American forces at the end of World War II — and whom Charlie describes as “the greatest person I ever met.” While von Braun and his German colleagues built rockets, Charlie’s team calculated their flight times and trajectories with a “slide rule and desk calculator.”

In 1953, they launched Redstone, America’s first guided missile, and it followed the path that Charlie’s team had calculated. However, the days of the “slide rule and desk calculator” were coming to an end. The Oak Ridge National Laboratory received the first computer in the South, and Charlie transferred to east Tennessee to oversee its installation.

In 1955, Charlie returned to Huntsville as the Deputy Director of Computation and installed the first computer at that location. By this time, there was an international competition to put something into orbit.

“We had the capability to put the Redstone in orbit before the Russians succeeded, but Eisenhower didn’t want to use a military missile,” he says. “That’s when they (the U.S. Navy) started Vanguard, and it was a tremendous failure. Vanguard never made it. So the Russians beat us. Then 85 days later, we were in orbit. Redstone was ready, and the calculations were all done. We could have beaten them, but we weren’t allowed to.”

With a string of successful launches, the Mercury program was established to take people into space. Now, Charlie’s calculations did more than determine the trajectory of a rocket. They determined where to have ships waiting to pick up returning astronauts.

In 1962, the stakes were raised when John F. Kennedy announced the goal of putting a person on the moon. According to Charlie, this had always been von Braun’s goal, but concerns remained.

“We always knew sending people to space would happen, but we still had questions about whether man could survive on the moon,” he explains.

At one point, President Kennedy toured the Huntsville facility and met the administrative staff. He was introduced to von Braun and other German scientists. After meeting a line of people with German names, he was introduced to someone named Charlie Bradshaw. The president immediately responded, “How did you get in here?” Charlie remembers, “I thought since he was the president I better not laugh, but everyone else did.”

Charlie “got in” there by being one of the best mathematicians in the nation and stayed through the Apollo 11 mission that put the first men on the moon.

In 1970, Charlie left the space program to direct the installation of the first computer at Vanderbilt University and oversee its operation.

Charlie remained at Vanderbilt until his retirement and then he taught classes at Cumberland University. Looking back on his career, Charlie says sending rockets into space made him more interested in the universe, and that interest led him to become a stronger believer in God. In fact, he declares, “I become more of a believer the more I learn.” Without a doubt, Charlie has learned a great deal.