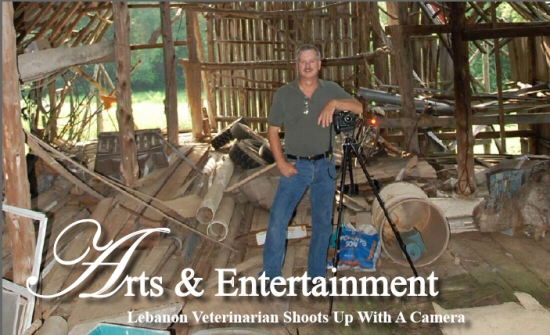 Lebanon veterinarian Perry Harmon works closely with dogs and cats from 8 to 6 weekdays at his animal practice on West End Heights.

But he moonlights as a shooter, and his weapon of choice is his Nikon D200 camera.

While he has made treating pets with ailments his career choice, through the eye of his lens, he finds people to be most fascinating creatures. Dogs and cats are often his subjects for prints, but it seems people are the focus of many of his best photographs.

“I like people, especially interesting-looking people or people that I can put in an interesting situation or unusual site,” says Harmon, 52, who opened his veterinary clinic in Lebanon in  1999.

Some of the photographer’s most tantalizing works can be amusing as well and leave observers guessing as to whether they are looking at artwork or photographs.

Harmon achieves the desired effect that he describes as “Norman Rockwell-ish” by altering the characters with Adobe Photoshop and several other programs, thus giving them more of a painterly or cartoonish effect. The final product is amazing and delightful.

“Is that a photograph or is that a drawing? If you can’t tell, I’ve got you right where I want you,” said Harmon of his treatments that may take him three to six hours of labor.

Several of these Rockwell-type prints of Lebanon residents may be seen around town. Check out the following: cigar-chomping sandwich-maker Ralph Reed at Jersey Mike’s; Charles and Ramona Haskins at Lebanon Chemicals; and a garage full of employees at Rose Tire Company.

One other Harmon print worth mentioning is a mesmerizing 180-degree panoramic shot of half of the Lebanon square at night. He took 16 different photographs after dark one evening and with computer software melded them together into one long photograph.

A number of his prints will be displayed Sept. 29-Oct. 11 at Sherlock’s Book Emporium.

The animal doctor began his photo habit while a teenager and was head photographer for his high school yearbook.

“The first thing I remember about photography that I thought was cool, I had a 110 camera and went outside and took a picture of the sunset. When I got it developed, I thought it was the coolest picture I’d ever seen. After I learned to develop my own film, it really picked up.”

Nowadays he spends at least five hours a week taking photographs, and, in fact, he is a professional shooter in at least a small degree.

“I sell stock photos on Web sites,” he says of his pictures of animals, old cars and panoramic scenes such as barns, fields and lakes.

The stock photos are licensed at such online sites as Shutterstock, Istockphotos.com and Fotolia.com, so that they can be used in magazines, on cards and billboards or on Web sites by publishers, media buyers and Web designers.

“My goal for retirement is to travel around and shoot more stuff like that,” said Harmon, who maintains a studio in a big room near the front of his vet office. “The key to good pictures is understanding the lighting.”

Born in West Palm Beach, Fla., Harmon grew up in Hollywood, Fla. He did his pre-vet studies at Cleveland State Community College in southeastern Tennessee after his parents moved to that area. He also labored on a cousin’s farm

“When I was a kid I always wanted to be a veterinarian. Then I didn’t want to be one for a long time because there was way too much schooling,” Harmon said. “I was working on the farm, and a horse cut his leg, and they called Dr. Jerry Bancroft, and he came out and sewed up the horse. I had never seen a large animal vet work before, and I thought it was fascinating.

“The other thing, most of the time on the farm I worked six days a week, mowing grass, weed eating and hauling hay. One day it hit me, ‘I’ve got more potential than to do this the rest of my life. If I don’t go back to school, this is still what I’m going to be doing forever and trying to survive on $600 a month.’”

Harmon decided to leave farm life behind and enrolled at Tennessee Tech in Cookeville, where he studied animal science and biochemistry for three semesters. The first week at Tech he met the woman who became his wife. Now, Perry and Anne Harmon have celebrated more than 26 years of marriage and share three children: Emily Anne, Hayley and Jackson. The family also includes two cats and two dogs.

After Tech, Harmon earned his doctor of veterinary degree in three years at the University of Tennessee at Knoxville. He first practiced in Southhaven, Miss. After a year and a half, a classmate helped him relocate to the Mt. Juliet Animal Care Center, where Harmon served for nine years. For the past 10 years, he’s been serving pet lovers in the Lebanon area.

“This is a small animal practice: dogs and cats mostly; an occasional bird, rabbit or squirrel, and we’ve had a groundhog and a blue heron,” says Harmon’s office manager and veterinary assistant of eight years, Dee Earnhardt.

“I do everything he doesn’t want to do,” she jokes. “He’s always calm no matter what. He’s kind and happy-go-lucky. He tells jokes. We laugh a lot here.”

Like all veterinarians, Harmon takes on plenty of sober situations as well as a share of charitable cases, such as a kitten that lost a foot and most of a tail in a lopsided battle against a car radiator fan a few months ago.

“He helps us with the rescue animals. He gives us discounts on our vaccines, and every once in awhile helps with a sick or injured animal for nothing. He’s very good to us,” said Nancy Hooper, who operates Lebanon’s Country K-9 Pet Resort and Rescue.

“We do the worst scenarios,” Hooper said. “Dr. Harmon recently operated on a kitten whose leg was completely gone. And the little ole tail was severed too, just barely hanging on. Nobody would have kept that cat alive. It was pitiful. He saved its life.”

This is the kind of work that Harmon enjoys most.

“The best part of being a vet is just helping the animals that cannot help themselves,” said Harmon. “My ideal situation would be to do nothing but the rescue work where I could do my best to fix them without wondering about ‘OK, who pays for this?’ But in the end, someone has to.”

For the big-hearted veterinarian, his photography takes him away from the world of sick creatures and the worries of running an office. “It’s a way I can create something,” says Harmon about his hobby that has evolved into a small business that allows him to explore other arenas with mind, hand and eyes.

A number of his prints will be on display Sept. 29-Oct. 11 at Sherlock’s Book Emporium,  200 Maddox-Simpson Parkway.