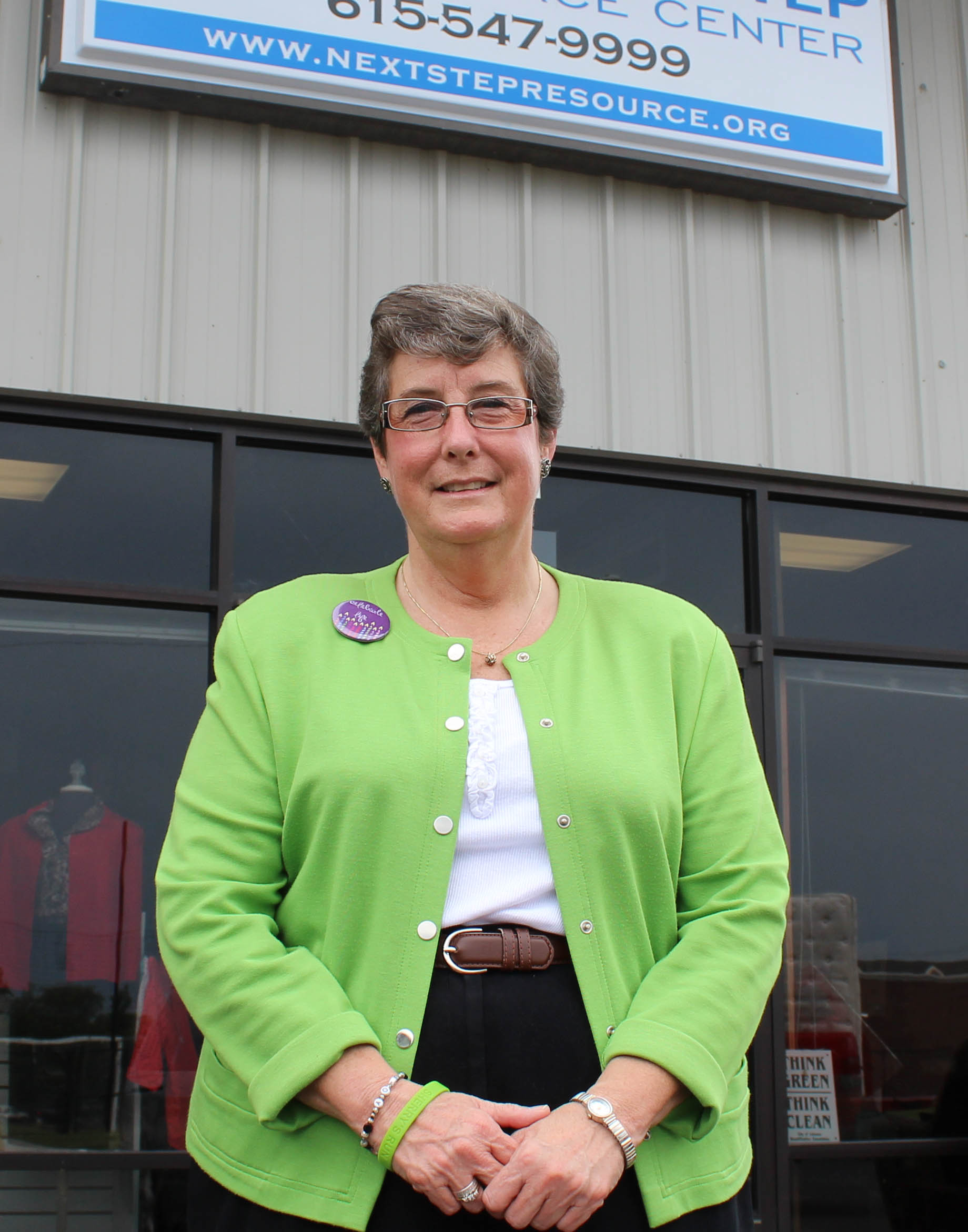 as told to Tilly Dillehay

Julie Hadlock was wearing a black business suit when she went to court in November of 2011. A respectable local businesswoman, she had come straight from work.

Three hundred and thirteen days later, she put the same black suit on again to walk out of the Wilson County Jail.  She had spent nearly a year behind bars—and was now a felon.

Two years after her release, she is running a ministry called The Next Step in Lebanon. This place gives immediate aid (clothing, furniture, job matching/training, rides, and help getting into a rental) to people getting out of jail and to people without homes. The ministry is her own brainchild, and she says that ten months in jail made her uniquely equipped to run it.

This is Julie’s story about finding her piece of the good life—in her own words.

I grew up in an 8,000 square foot house near Nashville. My father made six figures and my first car was a gold Trans Am, just like in Smokey and the Bandit—Daddy gave it to me on my sixteenth birthday.

I had just sold my own business to another company when I moved to Lebanon in 2010. I started a new business here selling equestrian equipment and joined the Chamber of Commerce and really became part of the community.

But my business didn’t have a whole lot of capital early on. It was pretty tight, month to month. In 2011, I made a very foolish mistake: I went out and wrote checks without confirming that I had sufficient funds to cover them. I knew better than to do that.

I was in the process of visiting the businesses around to collect the bad checks and explain the situation when I was called to go in to court a few months later. I was told to follow an officer out of the courtroom and they took me straight to jail. I was assigned a $25,000 bond. If I’d had $2,500 I could have gotten out, but then, if I’d had $2,500, I wouldn’t have written bad checks.

The jailers were very kind. They knew I was scared, so they put me in a private cell up front and let me shower alone and all that. I wasn’t supposed to be there for long. But I ended up being in jail from November of 2011 to September of 2012.

A few weeks after my arrival, I was put into population at the jail—a large space with 34 other women, surrounded by smaller cells. At first, I was just overcome with fear and confusion.

Then, a few weeks in, something clicked. I just turned it into a job.

I would get up in the morning, and I would have my agenda laid out, and I would go out into the middle of the area. I had three Bible studies a day with the girls, and I had a Spanish class, and I taught them how to play bridge, and make table settings. We had talent contests! Anything to occupy them and help them not to fight with each other.

I also walked. I walked a certain number of miles every day, just walking around the outside of the room. I lost 80 pounds in there. And I journaled—I have pages and pages of notes. I wrote down what the guards said, what the inmates said, what I learned.

Here’s now naïve I was at the beginning. When I first got to the jail, I noticed that when they brought your meal to you, they’d stand outside the door and wait, and you’d take the meal out of its plastic baggie and give it back to them and they’d take it away.

I thought we were recycling.

So, being a happy member of the ‘Think Green’ Committee in Wilson County, I wrote letters to the sheriff, the mayor, the warden of the jail, and the Chamber of Commerce. I wrote to tell them about what a wonderful, environmentally friendly jail we have here. A few days later I had a routine visit to the jail psychologist and told him what a great jail we have, and about the recycling.

“Um, no,” he said. “We don’t do that for that reason. We take those away from you because you might try to swallow that and kill yourself.” I was shocked.

You see, I’d never known people like the girls in jail. Growing up in Nashville, my idea of volunteering was this: our church would go to the Nashville mission and serve the Thanksgiving Day lunch across the counter. And I’d go pray while we were there, or hug a smelly person one time maybe. But I couldn’t even imagine living with one, or being a smelly person myself.

All that was about to change.

In addition to the classes and activities I hosted in the jail, and attending church services with seven local churches who held services there, I started a letter writing ministry. Girls who left would give me their address and say “Miss Julie, would you write to me?” And I would. By the time I left the jail, I was writing letters to 43 women and girls.

I was also trying to understand why so many of them were coming back in after they’d gotten out.

I would scold them like a mother. And they would say “Well, Miss Julie, it’s too hard. We can’t get a job out there.” They had every excuse under the sun. And I would say, “You’re not trying hard enough, because jobs are plentiful if you want to work.”

But later on I would find out just how right the girls were.

Over ten months after the day I was incarcerated, they called me to court. I pled guilty, was sentenced, and put on probation. When they led me back into  the jail, there was a cheering frenzy.

So I put back on my black business suit to leave.

When I got out, every belonging was gone. My home had been seized, my car was taken, and my business had been dismantled. I hadn’t been able to make payments, and I had no family in town to take care of things.

There was no information in the jail about where to go or how to get there. Finally, I contacted a local nonprofit, and they very politely gave me a train ticket to Nashville so that I could sleep at the Nashville Rescue Mission.

The mission gives free bus passes to all residents, which came in very useful to me, although at first I betrayed my privileged background by asking if I could just have money for a cab instead. (All I got was a hearty laugh from the mission employee.)

The first day in Nashville, I went to businesses I’d worked with in the past to ask for a job. The first one offered me a job—then did a background check and said I couldn’t be hired for 7-10 years. Business after business told me the same thing. Finally, a staffing company explained to me that a felon simply could not expect to be hired by large companies at all. Even at very low-level jobs.

My options, I was told, were as follows: 1) Start your own business again, 2) Work for a family business that doesn’t mind your background, or 3) Do manual labor, like landscaping.

But here’s the thing: I had expected to work in my old field, earning $50-60K a year. I thought I needed to earn that much in order to pay my debts, and probation fees. It never occurred to me that I could work for minimum wage. And now it seemed that even minimum wage might be hard to get.

After four days in the mission, I came to a day when my hunting for help at local nonprofits took me so long that I wasn’t going to be able to get into the mission for the night. I realized that I was going to have to spend the night on the street. This is when I finally burst into tears and just cried and cried. I was desperate enough that I called a brother of mine, who lives in East Nashville.

Until now, my family had very strictly left me to bear the consequences of my mistake, and I can certainly appreciate that. But when he knew I was going to be on the street, he was willing to take me in until I could get my feet under me again.

For the next few months, I would use my brother’s car on days when he wasn’t working and drive to Lebanon to talk to businesses and maintain contact with ladies I was writing to. I found ministries in Nashville that give away clothing and food and necessary items, and I would keep those items in the car and bring them to the ladies who were in need.

Many of them lived in hotels, and by now I understood how hard it is to eat without kitchen items. So I’d watch out for a hot plate or crock pot and bring them one. Others lived camped out in the woods, and others in the backs of warehouses, and I would go out there and sit and have coffee with them and talk.

So that’s how the ministry started. I would bring things back here for the girls out of my car. And then they would say that they didn’t know how to use the computer, so we’d go to the library or the career center, and I’d show them how to apply for jobs and help. And then they’d say they were scared to go interview, so I’d put them in the car and drive them out and say ‘go on in there,’ and they’d get a job. Then I’d give them rides to work.

And this was where the kindness of people really began to show itself. The chaplain of the jail, who I’d become friends with while there, helped me buy a car. Soon afterwards, I was given the opportunity for a job—as a nighttime custodian at an assisted living facility and church. Then a couple from my church heard I was living out of my car (for about a week, to save gas) and immediately asked me to come stay in their guest bedroom until I could get my own place.

I now rent a house here in town. Currently, I have two ladies staying with me, both of whom are in the Next Step program.

I won’t say any more about what we’re doing there, since you can read about it in another article in this issue. I’ll just say that I’ve found my piece of the good life. And it doesn’t look like I thought it did when I was young and riding around in a gold Trans Am.