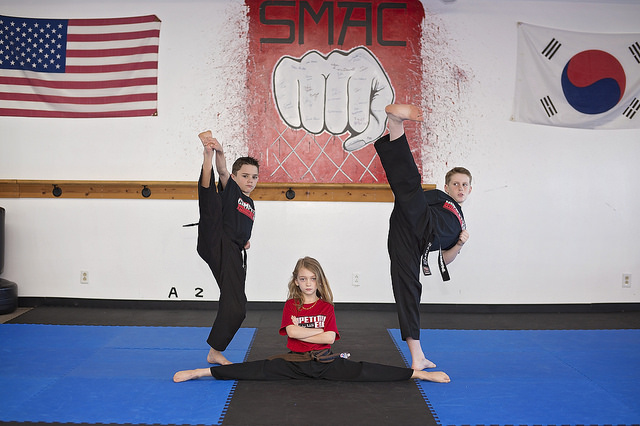 Taekwondo kids get serious about their favorite sport

It’s midafternoon Thursday at Success Martial Arts studio on the west side of Lebanon, and in a big room carpeted with blue and black mats, three barefooted youngsters make like whirling dervishes.

Thirteen-year-old Dawson Holt twists and turns his body while he slashes, thrusts, jabs and twirls a shiny (and dull) sword through the air.

Averi Presley, 8, twists and spins nimbly as she brandishes a 3-foot-long bo stick, a martial-arts weapon that resembles a pool cue.

Standing and then from his knees, Jacob Besse, 14, grips kamas, similar to a scythe, and chops, punches and makes rapid seven-cuts in the space before him.

The trio makes up three of the seven youngsters on the Lebanon-based Competitive Edge where the average age is 11½, but when it comes to their maturity level, well, take it up a bit.

The squad competes in NASKA (the North American Sport Karate Association), and four of the youths claim Middle Tennessee as their home. Every member is ranked No. 1 in multiple categories in their region, and each is among the top 10 for their age group in the nation.

Youngest member Averi is already a grand champion. She began taking martial arts classes at age 4, but with three elder brothers immersed in the action, she confesses she really had no choice but to follow in their path.

“The more I did it, I liked it,” grinned Averi, a second-grader, who trains 10 hours a week and cannot stand to miss or be late for a class. “My brothers are a little bit tough on me sometimes but not that much.”

Her brothers, Reid, 20, Cole, 17, and Jake, 13, along with Jackson Rudolph, 17, of Paducah, Ky., and Jason Warren, who co-owns Success Martial Arts Center, coach the squad of youth black belt competitors. For the most part they practice Taekwondo, a Korean martial art that emphasizes high kicks, jumping and spinning kicks and fast kicking techniques.

The Presley brothers have trained in competitive martial arts since they were tots and have received worldwide recognition for their multiple skills. Displayed in the studio are the Warrior Cups that Reid and Jake won on the same day at the 2014 AKA Grand National in Chicago.

Averi, who most enjoys flipping, an extremely creative category that combines gymnastics and martial arts, takes her lessons from Warren. She entered her first national event in St. Paul, Minn., late last year and confesses, “I was a little nervous. I loved it. I wanted to keep doing it. My goal is to be on stage at a bigger tournament.”

Her teammate, Zach McBroom, 11, a fifth-grader at Browns Chapel Elementary in Murfreesboro, entered the sport at 7 and last year was the triple-crown winner in the Pro-Am RSKC Circuit for forms, weapons and creative musical extreme.

“I was nervous but once it was all over it wasn’t that scary,” recalled Zach, who said he got into the sport because, “I liked superheroes and the Karate Kid and Teenage Mutant Ninja Turtles. I wanted to be like them.

“I like that that it’s a different sport than football, basketball, baseball and soccer,” said the athlete, who found wonderful fringe benefits in the sport. He met his current best friend, who lives in Jonesboro, Ark., at a tournament.

Zach’s mother, Kristen McBroom, echoes the idea that there are even more rewards to be gained from the regimen. “He was real shy before and reserved, and the competition has given him self-confidence and built respect for others.”

The North American Sport Karate Association is a world martial arts tournament circuit that holds 13 competitions a year. The contests feature athletes competing in traditional forms, fighting and weapons, which include the bo staff, double bo, sword and kamas.

Jacob and Dawson, like Averi, live in Lebanon. Rounding out the team are NASKA National Champion Rebecca Hammond, 8, of Marion, S.C.; first-degree black belt Duncan Lowry, 15, of Loganville, Ga.; and NASKA national champion Esteban Tremblay, 10, of Blainville, Quebec, Canada. Most of the youngsters are home schooled.

The Competitive Edge formed last October, and at the AKA Warrior Cup in Chicago, their first competition with every member together as a team, they proved formidable. Four of the seven qualified for the grand championships in which they competed against all the black belt winners from the other under-18 divisions. Lowry went to the grand championship final show to compete on stage for the ultimate prize—the Warrior Cup.

“NASKA is a national circuit for world class athletes,” said Success Martial Arts chief instructor Warren. “These tournaments are the most competitive you’re gonna find. Most of them bring anywhere from 1,000 to 2,000 or more, from ages 4 and up. The largest is the U.S. Open, held in Orlando, Fla., which might have competitors from 40 different countries.

“This has turned what’s been considered an art into a sport. We put emphasis on Taekwondo but also teach tumbling, boxing. We’re not a traditional Taekwondo studio, which probably makes our kids a little more unique.”

He began instructing Reid and Cole when they were 5 and 3, respectively.

“They’re world-champion level and now have started helping other people with their training to take them to another level,” Warren said. “The goal of the team is to take up and comers who have a bright future and focus and who won’t quit and help get these kids to that next level.”

“It’s easier to work with this age group. They’re easier motivated,” added Reid, a sophomore business major at Cumberland University, who has been the driving force in the innovation of the double bo and travels around the world teaching and performing this style of weaponry.

“They bring heart and work ethic,” said Cole, whose passion is creating and innovating new techniques with a variety of weapons. “They want to be successful as much as they want to breathe. I kind of like seeing where they go with it and what they can do with what I give them. My goal, no matter what happens, is that they’re having fun and enjoying themselves.”

Meanwhile, seventh-grader Jake, who is a third-degree black belt in Taekwondo and has an ISKA and NASKA world championship like his brothers, said, “I kind of help out and work out with them and train a little like a junior coach.”

This year the Competitive Edge will compete in seven to eight national events and that many more regional competitions. Next up is the Gator Nationals May 7 in Tampa, Fla., followed by tournaments in Atlanta in June and Orlando in July.

Training costs and traveling expenses to tournaments are not cheap.

Said Warren, “This is an expensive financial burden for a lot of these families. We have to be selective. Food, travel, hotels and tournament fees can run $1,000 for a parent and child.”

Jacob, who was named the Pro-Am RSKC 13-under Black Belt CMX champion for 2015, described the experience of a big contest.

“Before you go on you always have butterflies and are nervous. It’s extremely busy and loud with thousands of people in one room. You’ve got to psych yourself up and zero in and focus on what you’re doing,” said Jacob, whose best event is either traditional weapons sword or creative weapons.

“I started when I was 5. I wanted to be like my big brother who was doing martial arts,” he said of his entry into the sport.

While the sacrifices on Jacob and his family are great, he said the benefits include the camaraderie with his team, the martial-arts friendships he has made with athletes in 25 states and the fact that “you can carry on for as long as you like; well, probably at 80 you can’t do as much stuff.”

Jacob’s mother, Mary Besse, an instructor at Success Martial Arts who has a black belt, said, “This is so good for him. The discipline involved is outstanding. It centers children. My boys’ work ethic has improved tremendously and has helped with communicative skills and confidence. Competing matures them in a way I don’t think anything else would.”

Sixth-grader Dawson, who is a 2015 NASKA World Top 10 for fighting, forms and weapons in the 10-11 year old black belt division, favors the flipping and sword in traditional form.

He said, “The payoff for me is probably self-defense. The sport is all about self-defense.”
His mother, Christy, noted, “In the second grade he was getting bullied in school. We didn’t bring him here to learn to fight back but for self-confidence, and he carries his head up high now.” 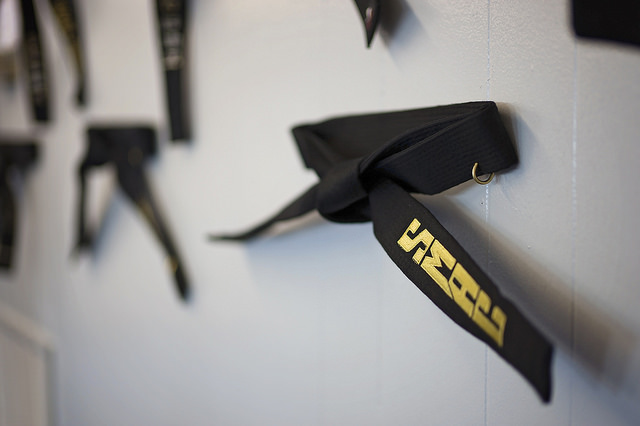 “We really want to get these seven established,” said Warren. “We don’t want to get ahead of ourselves and get the team too big. They all have the goal of becoming the best in the world.

“When you have a team, it’s like a family. We’re really close. But even when you have a team, the other teams, your rivals, pull for you. It’s a sport that builds one another up. That has a lot to say about the discipline of martial arts. When they’re done, they’re high fiving and hugging.”

Not a bad way for kids to get their kicks.