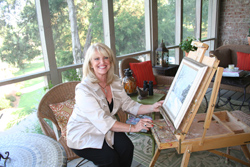 “Every child is an artist. The problem is how to remain an artist once he grows up” – Pablo Picasso

Kayla Youngquist Finds the Long Lost Artist Within Her

When you meet Kayla Younquist the first thing you notice are her bright eyes and exuberant smile. She has a real sense of openness and warmth about her, which is probably one of the reasons she has been such a successful Kindergarten teacher for over 26 years…

“Every child is an artist. The problem is how to remain an artist once he grows up” – Pablo Picasso

Kayla Youngquist Finds the Long Lost Artist Within Her

When you meet Kayla Younquist the first thing you notice are her bright eyes and exuberant smile. She has a real sense of openness and warmth about her, which is probably one of the reasons she has been such a successful Kindergarten teacher for over 26 years.

Kayla grew up in Alexandria, Tennessee but has lived in Lebanon for more than 33 years. Married to her sweetheart Chuck who is retired from the Air Force and is now a Captain with Southwest Airlines, together they have three sons and one daughter-in-law. Alex, Beth and Matt Scruggs live in Lebanon and their son Adam Youngquist lives in Knoxville.

When Kayla was a little girl she always loved to draw and color and was fortunate to have had the opportunity to be taught art in her small Alexandria elementary school by Mrs. Beulau Jennings, whom everyone called “Miss Shorty.” “Ms. Shorty was a local, talented artist as well as the wife of the local school principal, Mr. Charles Jennings. I believe it was Miss Shorty who first instilled in me the spark that led a 50 year old to dream about painting,” explains Kayla.

Although Kayla loved art, she didn’t actually pick up a brush to paint until 2003. Like many young women she spent her early days mothering, working and taking care of all those around her. Her first teaching job was with the Lebanon Special School District. She still laughs about her first interview with Mr. Cordell Winfree who was the LSSD Director of Schools at the time. Kayla says that she had always known that her purpose in life was to be a Kindergarten teacher. So when he asked her what grades she would be willing to teach she replied “I don’t want to teach anything but Kindergarten! He just leaned back in his chair and laughed, probably in disbelief that anyone needing a job would be so naïve to tell him they would only be willing to teach Kindergarten. But, amazingly, God let him see something in this 21 year old inexperienced teacher and he hired me as a Kindergarten teacher at Market Street where the Central Office for LSSD was located at the time.” For 26 years, Kayla continued teaching just Kindergarten at Byars Dowdy and then Coles Ferry Elementary until she officially retired in 2004.

In 2003, Kayla casually mentioned to Chuck that she would like to try to paint sometime. He immediately encouraged her to purchase whatever she needed. “When I never got around to doing it, he did it for me. He surprised me with an easel, framed canvas, various brushes and a beginner’s set of acrylic paints and a day or so after Christmas 2003, I painted my first piece.”

“My first attempt looked like a mess and I told my husband that I had made a mistake,” says Kayla. Chuck chuckled interjecting “at first glance at the painting I thought she might be right!” But, not wanting to give up Kayla continued creating her masterpiece and a few hours later a painting started to emerge. “It was a painting of the snow coming down right outside our window and I had no idea how to do it, but I just did it.”

“I stopped counting my paintings when I got to 100.” remarks Kayla. She also noted that she has never thrown away one canvas, she just keeps painting until what she is looking for emerges. Kayla has never taken any classes or studied any books about painting. But one glance at her artwork and you realize that some people are simply blessed with talent and Kayla has been blessed indeed.

“Painting has ended up being more than just a hobby, challenge or a means of creative expression for me. It has become a therapy for pain relief and depression especially during the cold winter months. I had to retire from the teaching career I loved and the career God had blessed me to do in 2004 due to an illness. I was finally diagnosed with fibromyalgia and chronic fatigue syndrome. When my husband gave me my first paints, we had no idea that painting would end up being a way for me to escape and forget about my pain for a while.” While she paints Kayla is on a mission, she forgets about the pain and fatigue and stays completely focused on what she is trying to accomplish. Some paintings take days and days and often she is painting multiple paintings at the same time.

Kayla moved quickly from the acrylics Chuck first bought her to the oils which she really loves, and finds that her art is truly an expression of the beauty that surrounds her home. The Youngquists live near the lake in Lebanon and Kayla says that living in this area provides her her greatest inspiration. “It is so inspirational to see the beautiful colors emerge in the sunsets, the full moon reflecting like diamonds in the still, black lake or the autumn trees glowing in the water at a golden dusk and nothing is as beautiful as the rare pale gray and white pallet of snow falling on the icy lake.”

Their home attests to the fact that Chuck and Kayla love admiring and appreciating artwork. There is hardly a wall, table or nook that doesn’t have a painting – either one that Kayla has painted or that they have purchased. Chuck has a unique collection of paintings he  acquired while stationed in foreign countries during his Air Force days and Kayla is known for finding paintings at local flea markets.

“I believe that art is neither good nor bad. It is only what it is to the beholder. We are all so different and unique with many desires and tastes. A painting that causes one person to gaze for minutes, may cause another to only glance for a second. Most people would look at my first painting for a second and wonder what they were looking at, but my husband still says it is his favorite.”

When asked what her painting style is, Kayla smiles and says “I don’t even know if I have a style but I have found that the people who know and love me also love my paintings.”

Kayla has sold some of her paintings but often times donates them to local charities. This year she will be donating a second painting to Sherry’s Run. She also gives the paintings as gifts and had some of her paintings copied onto note cards for Christmas. “Many paintings find their home simply from someone visiting and saying that they love a certain painting, or by them telling me if I ever get the chance to paint them one, they would love to have it.”

“I have a friend who says that every time she looks at my paintings in her home it makes her smile and isn’t that what art is all about.”