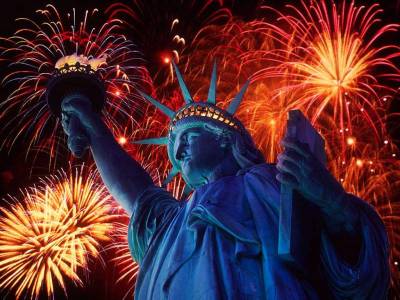 I was asked recently what was my fondest memory of the 4th of July and I knew immediately the answer–Sunday, July 4, 1976!  Most of the time you have to think about such an iconic holiday.  Where was I?  Which bbq, pool, park or family celebration were we attending and what happened.

Not for me, this answer was easy!

1976–the year of Halston!  He designs uniforms for many high profile commercial businesses.  Braniff Airlines, Avis Car Rental and The Girl Scouts (could this be why I always wanted to wear my uniform?)  Most prestigious uniform request came from the US Olympic Committee, he was asked to design the US Olympic Uniform!  He had just released his first fragrance and was riding high as a top American Designer.

But that was not the only American Icon on the scene.  We were introduced to Jiggle TV–yes, Charlies Angels.  This crime drama was an original because women had not been showcased in this way before, in a role that was traditionally male dominated.  Kate Jackson, Farrah Fawcett-Majors and Jaclyn Smith were the three original Angels that were tough, beautiful and fashionable!  Wednesday nights were always a winner in our house…I was able to stay up and watch Charlies Angels if my homework was complete and all other chores were done.  It was a good night.
What is your fondest memory of this summer holiday?  July 4, what does it mean to you?  Are you reminded of the 52 founding fathers that signed the Declaration of Independence on July 2, 1776? Is the holiday a family day of fun and frolic?  Or is it a day to reflect on all we have accomplished in the past 237 years.

For me, I always think of the Bicentennial each ID4.  Growing up in Philadelphia I was very aware of our Revolutionary War history.  The Liberty Bell.  The Bicentennial Bell.  Independence Hall.  Betsey Ross.  Valley Forge…and so much more.  July 4, 1976 was the year of our Bicentennial–our 200 year celebration of independence!  What more could a kid ask for when living in Philadelphia.  It seemed that the celebration went on for a year but the highlight was that warm Sunday in July.
President Ford speaking to a crowd at Independence Hall, then ringing the Bicentennial Bell (cannot ring the Liberty Bell…it has a crack!).  Then off to the parade, and boy what a parade it was.  Everyone was patriotic, wearing their red white and blue.  Kind to each other.  Reminded of why we were all there.  Italian Ice, Cheese Steak Sandwich, Italian Market and Soft Pretzels.  What a fun day!

I hope your ID4 is the best ever and you have as many fond memories of this wonderful holiday as I do!