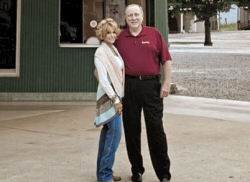 MEMORIAM OF LOCAL FATHER, BUSINESS LEADER AND FRIEND TO MANY

“What you leave behind is not what is engraved in stone monuments, but what is woven into the lives of others”  – Pericles

For some men, we erect monuments to mark the achievements of their lives and to remember their passing.  These monuments can take many forms —

IN MEMORIAM OF LOCAL FATHER, BUSINESS LEADER AND FRIEND TO MANY

What you leave behind is not what is engraved in stone monuments, but what is woven into the lives of others.

For some men, we erect monuments to mark the achievements of their lives and to remember their passing. These monuments can take many forms — sometimes statues like General Hatton, who looks over the Square in Lebanon, or the plaque on Sam Houston’s law office. Often though, the monuments that we leave behind are ones we had a hand in building ourselves. They aren’t always obvious to the casual observer, but they are legacies nonetheless, legacies that represent the work our hands have wrought, and the lives we have touched.

For Jere McCulloch, a Lebanon lawyer who died unexpectedly in August of 2013, you won’t find any statues on public greens or plaques adorning walls, listing his accomplishments (which he would have hated), but his monuments are nevertheless all around us. McCulloch was the founding member of Rochelle, McCulloch & Aulds, PLLC, which he took pride in noting, was the largest law firm in Tennessee, between Nashville and Knoxville. As a business leader, Jere was involved in various civic organizations throughout his life, serving as President of the Lebanon/ Wilson County Chamber and the 15th Judicial District Bar Association, the Lions Club and the Exchange Club. Jere was also a member of the first Leadership Wilson class and remained an avid supporter of that organization until his death.

For more than 25 years, through the representation of his clients, Jere had a hand in a significant amount of the growth and development in Wilson County. Through his work, he was involved in such projects as the Nashville Superspeedway; the Prime Outlets of Lebanon; the Wal-Mart development on South Cumberland in Lebanon; the approval by Wilson County authorities of STEP sewer systems that allowed for residential developments such as Clay Estates, Heritage Highlands and Wright Farms, among others. As general counsel for the West Wilson Utility District for more than thirty-five years, he helped foster and guide much of the development, both commercial and residential, in Mt. Juliet and the western half of the county.

Although these monuments reflect some of the successes Jere enjoyed as an attorney, I’m sure that if he were able to say so now, the most important legacies are the people and institutions he left behind, and the way he influenced growth in each of them. Those of us who worked with Jere on a daily basis were certainly influenced by him.

Whether discussing the matters he was working on for his clients; the fortunes and needs of the Wilson County community at large; or the growth and development of the attorneys in the firm, while mindful of the needs of the present, Jere always took the long view. “Let’s look at this from thirty thousand feet” was a phrase he loved to use to express both his practical approach to problem solving, and, in some sense, one of the basic philosophies of his life.

Jere was a mentor, to some extent or another, to each of the attorneys he brought into the firm, and we were all brought in by him–from Jo Ann Aulds, whom he’d urged to go to law school while she took off from work to be with a new baby, to Brice Rochelle, who joined the firm in the spring of 2013. Jere made you look at things from thirty thousand feet, like he did, and to take the long view. These talks often came about when he exercised one of his favorite pastimes, which was to load you into his pickup and take you to lunch at the gas station in Castalian Springs.

The practice of law, by its nature, is often combative and divisive. Jere was an accomplished litigator, who, in earlier days, would often crank up some Bob Seger or Meatloaf before heading to court to start a trial. However, his greatest talent, by far, was that of building bridges–of finding a way, when possible, to let both sides succeed. Frank Lannom, a partner at Lannom & Williams in Lebanon, once dealt with Jere in a property transaction involving the extended Lannom family. Through the course of negotiations, the parties got “sideways”, as Jere would say. Although the deal came close to falling apart, Jere was able to mediate a resolution that allowed both sides to address their concerns and complete the deal. The depth of this talent to work through problems was unique to Jere.

As Lannom later told me, “I believe Jere McCulloch could get the worst of enemies to sit down and reach an agreement. I believe if they put him on a plane and sent him to the Middle East, he’d be able to get that worked out. Jere’s ability to bring parties holding differing opinions together was almost magical. Not only did he do it with me directly, his work before the planning commission and other governmental agencies was even more impressive. Even after his legal magic was concluded, even more impressive was his desire to sit down and ask how you were doing, how your life, marriage and kids were. That meant as much as anything.”

For Elmer Richerson, President of Wilson Bank & Trust, the experience was much the same. The two had become friends soon after Richerson moved to Lebanon in 1988, and over time they came to seek counsel from one another. “He was such an even-headed guy. We always talked about ‘how can we tackle this?’ He could reason through any situation, and he always dealt with people respectfully. He was a monument of kindness and reason.”

Jere’s dedication to his clients was evident by the hours that he kept. He often turned on the lights in the morning, and set the security code at night. It was common to see his car at the office early on Saturday or Sunday mornings, parked next to a client’s. We used to say that the practice of law was not just a vocation for Jere but his a vocation as well, although he was not without outside interests.

Jere loved high school athletics, and, to my knowledge, went to a high school football game nearly every Friday night of the season. It was usually a game involving one of the Wilson County schools, but he would occasionally venture to Trousdale County or Metro if he found a matchup intriguing. For many years, he and his brothers and parents would attend the Clinic Bowl and watch every game, no matter the contestants. (I once asked Alan Poindexter, another of the members at RMA, how he would “deer hunt” for Jere, as Jere never seemed to be in the same place at the same time twice. Alan thought for a minute and replied, “I’d figure out how to bait him with high school football. It’s his only weakness”.)

As important as his work was to him, the true monuments to Jere were his daughter, Laura McCulloch Bass; her husband, Paul; and their two children, Braden and Elizabeth. Jere was of the generation (perhaps the last of them) that holds their emotions somewhat close to the vest. Yet it was evident what Laura meant to him when my wife and I had our first daughter and he told me, “Those baby girls grow up fast, Greg. Little girls are great at every age, but when they are little, that’s special. I loved to get home and lay on the floor on my back, and I could just hold Laura up in one hand. That’s a special time.”

Once Brayden and Elizabeth came along in 2007, Jere didn’t tarry at the office to turn the lights out quite so often. “Going to see the grandbabies” was often heard as he left out of the door by his office in recent years. He loved to share stories and pictures of Brayden and Elizabeth, and a prize photo of him on a Colorado mountainside was lately obscured by a picture of him with Brayden delightedly sitting astride a piece of heavy road equipment, a dream of every little boy and grandfather.

I have always thought of Jere as a seeker–he worked hard to stay abreast of changes in the law and to keep up with news in the community and in Nashville. He read voraciously and mined those efforts for nuggets he could put to use in his life or that he could share with others. Whether ideas on organization and motivation from Nick Saban or marketing and client service tips gleaned from the latest business tome, he never stopped learning, and, thankfully, never stopped teaching.

I first met Jere in 1993 as a first year law student when, as a favor to a fellow Mt. Juliet High School grad, he offered me a summer clerkship, which in time turned into an associate’s position at Rochelle, McCulloch & Aulds, PLLC, which in time turned into a membership in the firm. After Jere’s death during a cross-county bicycle ride, as we went through his files to make sure his outstanding matters were attended to, we found a small piece of paper taped to his desk with this quote from Gilda Radnor:

I wanted a perfect ending. Now I’ve learned, the hard way, that some poems don’t rhyme, and some stories don’t have a clear beginning, middle, and end. Life is about not knowing, having to change, taking the moment and making the best of it, without knowing what’s going to happen next.

He remained my teacher right to the end.

To honor this teacher and leader, the 2014 Leadership Wilson Class has organized a bike ride event in Jere’s honor. The event will help raise money for Empower Me Day Camp, which has given Braden, Elizabeth and other children opportunities to grow and thrive in ways they might not have been able to otherwise. The class is hopeful that the event will turn into an annual one — one more monument to a good man’s life.

The event is scheduled for April 26th, at the Ward Ag Center in Lebanon.