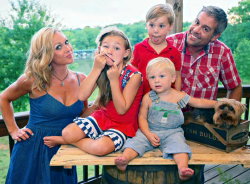 Brandon and Linlee Allen love to entertain, live life and raise their family in Wilson County

There is nothing like the pressure of hosting one of Wilson County’s most popular summer soirees to kick one’s interior design plans into high gear. Just ask the Allens…..

Brandon and Linlee Allen love to entertain, live life and raise their family in Wilson County

Hints of Linlee’s signature “rustic glam” style is present in every room. Linlee is a huge fan of mixing in sentimental pieces of furniture or family heirlooms with more modern furnishings. Here they repurposed old barn wood to create a stunning focal point. The dining table was a wedding gift from Linlee’s father who handcrafted the piece that finishes off the breakfast nook.

Linlee finds she gains the most inspiration incorporating pieces that close relatives have handed down to her with more modern design elements. In the master bedroom, her grandmothers radio and oscillating fan sit atop a distressed chest soirees to kick one’s interior design plans into high gear. Just ask the Allens. Brandon and Linlee Allen were first approached to be Patrons’ Party hosts by Cumberland University Development Officer Camille Burdine and Board Member W.P. Bone III in January. They were to follow in the footsteps of Dr. and Mrs. Joe F. Bryant, Dr. and Mrs. Scott Baker, Dr. and Mrs. Aaron Pryor, and Dr. and Mrs. Harvill C. Eaton,to name just a few of past, as hosts of the Patrons’ Party.

Soft fabrics and warm paint color continue in the Allens master bedroom. Above the bed a beautiful portrait of their three children set in a soft blue green, distressed frame becomes the focal point in the roomSince the inaugural Patrons’ Party was held in 1984 by Major and Mrs. Carl Wallace, Patrons’ Parties have preceded the Phoenix Ball annually to raise additional funds for Cumberland University.

“Camille said that she and W.P. wanted to come out and have lunch. W.P.’s wife, Leanna, and my mom, Kris Clower Johns, have been friends forever,” Linlee said, adding that the family connection made it impossible to turn down the opportunity.

The setting for the party would be their home. The Allens built their exquisite 8,000 square-foot lake view home from the ground up in 2007. After getting married in Knoxville in 2002, the Allens moved to Nashville and lived in a home on West End.

Linlee said that Brandon, now the owner of Henry Drilling in Franklin, had his contractor’s license at the time and was looking for investment properties in the Lebanon area when ran across the lake lot. “I will never forget the day Brandon brought me here to see the lot for the first time. I was expecting our first child and I instantly envisioned raising our family here. I remember looking at him and saying, ‘I want to live here.’ So that’s exactly what we did. Today, more than six years and three babies later, we couldn’t be happier with our decision,” she said. “We found our plans, changed things up a bit and broke ground on May 2, 2007.”

Their home on West End sold its first day on the market, causing the Allens to have to relocate to a 900 square foot apartment until the home on Berea Church Road was completed in February 2008. “I was 25 and we did what we could. We’ve just recently completed some projects in the house,” she said, pointing out the cream colored backsplash in the kitchen. In the Allen home, family antiques mingle with modern touches. Each room holds a special piece that either came from a family member’s home, made by a family member or repurposed by a family member. Although Linlee describes her personal style as “rustic glam,” she noted that they are a very casual family and that their home is quite livable – especially with three children including Ava McClain, 6, Harper, 3, and Sammy Hayes, 1, running around.

However, when the time came to plan the Patrons’ Party for 153 guests– Linlee kept with the Phoenix Ball’s “A Game Changer” theme and made the party

Mosaic tiled backsplash with brick enclosed gas cooktop and concrete topped butcher block make the kitchen even more inviting very fun and very adult. “A lot of it was inspired by our college years. We had a moonshine bar with four flavors of moonshine, food catered by Two Fat Men and of course the Super T band made the party,” she said. “When we were in school at the University of Tennessee – whichever house had a party with Super T – that was the house you went to.” Close friend and Patrons’ Party attendee Monica Alsup added, “Super T kept everybody on their feet.”

The band was set up underneath a 20×60 tent in the Allen’s’ backyard. “We had a 20×30 tent that was provided by Cumberland University, but Super T needed a stage area no smaller than 12×24 in order to accommodate 12 band members as well as Super T’s stellar dance moves!”

Since June is the prime season for outdoor events, we had a hard time finding a bigger tent that was available. But with the weather forecast calling for an 80% chance of rain we knew it was a necessity. Luckily, we found a 20×60 tent out of Cookeville. While it rained most of the day, the rain moved out just in time for the party to start.”

The Allens said that 2013 was the first year they had attended the Phoenix Ball, but that it is something they will continue to support. “I’ve really grown to love Cumberland University.

Part of Linlee’s design aesthetic includes portraits of her family. This wall in her formal living area is one of her favorite spots in her homeOur daughter, Ava McClain, just finished soccer camp there. It is really cool that we have a university in our community that is as old and established as Cumberland,” Linlee continued. “We are interested in the future of Cumberland University. It’s just one of many reasons we love to call Wilson County home.”