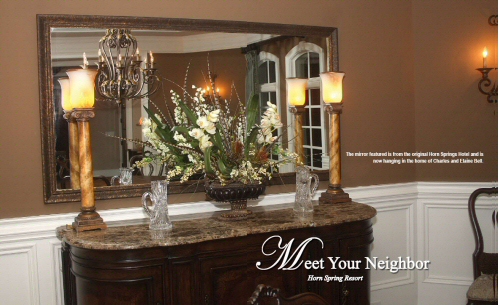 Once upon a time in Lebanon, Tennessee a full service hotel sat on the west side of town. The establishment offered up a gourmet dining experience, bowling alley and dance hall. But the most important and perhaps the biggest draw to Horn Springs Resort was the mineral water that was tapped, bottled and sold to guests.

Once upon a time in Lebanon, Tennessee a full service hotel sat on the west side of town. The establishment offered up a gourmet dining experience, bowling alley and dance hall. But the most important and perhaps the biggest draw to Horn Springs Resort was the mineral water that was tapped, bottled and sold to guests. It all began when James Horn, the owner of Horn Springs Resort, discovered a spring on his property around 1870 and noticed the water coming from the spring tasted and smelled odd. He sent the water to be tested at Vanderbilt University. Results from the tests showed the water had several trace minerals in it. Also included in the report were what diseases or conditions these minerals could cure. From liver to blood problems, this mineral spring seemed to be a
medicinal treasure chest.

After receiving the results, Horn saw the mineral water as an opportunity for profi t and decided to market his “water” to the general public by shipping the water throughout the eastern United States enticing people to come to the resort. At the time there were several mineral springs resorts in the United States that people were visiting on a regular basis to experience the healing affects of the water. In fact, by 1870-the year James Horn opened the Horn Springs Resort- there were mineral springs resorts from Hot Springs, Arkansas to Red Boiling Springs, Tennessee.

In 1893 James Horn passed away and left the resort to his son, Jim Horn. That same year the American Central Railway was completed and the track came within a few hundred yards of the resort. Jim decided to expand the hotel by adding a dance hall, bowling alley, dining room and more guest rooms. Horn then set off a massive advertising campaign trying to attract visitors from all areas of the country. From 1893 to the 1920’s Horn Springs Resorts was a main attraction for people traveling in Middle Tennessee. In the summer, families would travel to the resort to escape the heat and hustle and bustle of the city. The hotel also housed a post office that made it
convenient for guests to keep in touch with friends and relatives too.

While it is unclear exactly how many rooms the hotels housed, early advertisements show the allure of the resort was the 3,000 square feet of porch space for guests to rock their cares away.

The original 640 acre farm was owned by Ethelred Horn, a veteran of the Revolutionary War who received the land grant from the state of North Carolina. The enormous tract of land has since been divided and the spot where the resort sat is now owned by Charles and Elaine Bell of Lebanon, Tennessee. The Bell’s youngest son, Historian and College Professor Rick Bell, has researched extensively on the history of Horn Springs Resorts and gave some insight into why the resort was so successful. “People came to the resort not just for the healing waters but also to get away. Families would come for the summer. So many families did this it was like a reunion every year.”

In 1898, much to the dismay of Jim Horn, competition moved in a few hundred yards up the road. Hamilton Springs resort was opened by Jim Hamilton- the grandfather of Wilson County Judge Joe Hamilton. Both hotels were very popular in from the late 19th to the early 20th century. While Horn Springs Resort had the benefi t of a train stop a few feet from the hotel, Hamilton Springs had a similar train stop just one half mile from the stop for Horn Springs.

The competition was anything but friendly. The two owners refused to communicate with each other. According to Bell the only record of them speaking to one another came at a political rally in 1912. When the MC of the event asked each proprietor to speak about business Horn spoke about the benefi ts of his mineral water and how his was the best. After which Hamilton told the crowd Horn’s water should be good because it was being pumped from Hamilton Springs.

“They had issues over the water rights from the beginning.” Bell added Horn Springs Resort also had its fair share of famous guests too including the 33rd President of the United States, Harry Truman, Poet Laureate of the Confederacy, Virginia Frazier Boyle and Pulitzer Prize Winning Author, H.L. Davis.

It was a booming business until the crash of 1929 when people could not afford to take vacations. After the depression hit operating the hotel was not as profi table as it had been making it impossible to run. When Jim Horn died in the 1930’s his son Joseph took over the business. He downsized the size of the hotel and added the Horn Springs Pool in 1935, lowered the rates and instead of marketing the hotel as a resort he began marketing it as an event center. They hosted dinners, lunches and dances.

In 1937 the hotel was sold to Dr. R.D. Wilkerson who remodeled the hotel once again and added a miniature golf course to compliment the remaining activities of bowling, croquet and swimming.

In the 1950’s the Horn Springs Hotel burned, but the success of the business had died long before its demise. Besides two old guest books recording visitors, pictures, water jugs and a few other artifacts, the only thing left of the resort is the old stone well, brick fence and walking trails. The Bell family however is doing everything they can do to preserve the rich history of the resort by hosting an archeological dig for Cumberland University students earlier this year. If you would like to see the items recovered from the dig they are on display at the Fessenden House Museum on West Main Street in Lebanon.

Ironically, Hamilton Springs Hotel was destroyed by a fire in the 1930’s and never rebuilt. In an effort to preserve the history of the resort local builder and developer Jack Bell has just completed the development of Hamilton Springs Subdivision. This high end subdivision offers spectacular view of Lebanon and will eventually have sidewalks, a clubhouse and community center.

While the mineral spring industry has waned since its heyday in the early 1900’s, the history of Horn Spring Resort and Hamilton Springs continues to intrigue residents from all over the state.