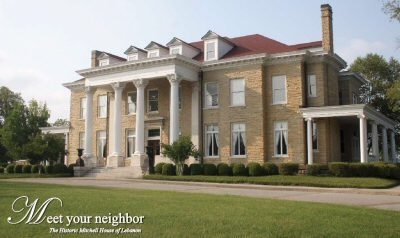 One of the most beautifully restored homes in the area can be seen on a leisurely drive down West Main in Lebanon. The skillfully restored facility is known as “Mitchell House” and is the heart of the corporate headquarters for CBRL Group, Inc., the holding company for Cracker Barrel Old Country Store, Inc.

One of the most beautifully restored homes in the area can be seen on a leisurely drive down West Main in Lebanon. The skillfully restored facility is known as “Mitchell House” and is the heart of the corporate headquarters for CBRL Group, Inc., the holding company for Cracker Barrel Old Country Store, Inc.

The majestic stone mansion was originally constructed in the early 1900s by Dr. David Mitchell and his wife, Elizabeth. The Mitchells were originally from Pennsylvania where Dr. Mitchell had accumulated a fortune from the coal mining industry. They found themselves in Wilson County when Dr. Mitchell chose to continue his education at Cumberland University. He was an exceptional student who believed that true wealth came from giving back to the community. Before his graduation from Cumberland University, he donated thousands of dollars of books and furnishings to the university library, which then bore the name “Mitchell Library” for almost 90 years.

In 1902, a few days after graduation from Cumberland University, he was elected president of the University and at age 26 became the youngest university president in the nation. He chose to forego a salary and also chose to pay the other professors from his own personal fortune. During his tenure as president, he served both the school as well as his new found home of Wilson County, by being known as hard worker and generous philanthropist to local causes.

In conjunction with his duties as president of Cumberland University and a local entreupeneur, Dr. Mitchell also was a co-founder of Castle Heights Military Academy with another gentleman, I.W.P. Buchanan. In the early 1900’s, Dr. Mitchell purchased 450 acres on what was then the western outskirts of Lebanon and then donated the majority of this land to the newly founded school. He had hoped to establish a premiere educational facility in the south that would educate children who would then go on to attend Cumberland University. He not only donated the land to the academy but also painstakingly oversaw the construction of the buildings on the campus, many of which still stand today.

Only after the military academy was built did he and Mrs. Mitchell begin construction of their own home on land adjoining the school property. It was their desire to raise their family in this beautiful setting, next to the academy and close to the university. They began construction on their family home, which became known as “Mitchell House”, in 1906 and completed it in 1910. The home, when fully constructed, encompassed 10,600 square feet.

Built in the Neo-Classical Revival Style, the house was like no other in the area. Craftsmen were brought in to work on the extensive millwork and wood panelings and floors. Chandeliers were imported from Italy and rugs for the floors were purchased from Austria. The coup d’etat of
the home was the main hallway on the first floor with the grand stairway consisting of two flights of stairs curving around and coming together on a second floor landing.

The family, which included the Mitchell’s two children, Mary Elizabeth and David, Jr., lived in the home together for only ten years. During this time they hosted many local church and community events including weddings and concerts. Their life, during this period, was all Dr.
Mitchell had hoped it would be in his grand home. Sadly, however, tragedy befell the family. First, the children contracted typhoid fever and Elizabeth nursed them back to health. Soon after Elizabeth, herself, became ill and three days later died of typhoid fever at age 42. Dr. Mitchell was heatbroken and almost immediately left Mitchell House and moved to California, leaving behind his children to be raised in Mitchell House by their maternal grandparents. Five years after their mother’s death, the children and their maternal grandparents moved to Florida.

Over the following years, Dr. Mitchell amassed and lost many fortunes and in an attempt to save his beloved home from creditors, deeded the Mitchell House to his children for one dollar. The children never returned to live in the home and in 1945 Dr. Mitchell died penniless in Arizona at the age of 69. It is said that he died of a broken heart never getting over the loss of his beloved Elizabeth. Unfortunately, without the Mitchells to preserve and honor it, the home remained abandoned for almost 16 years.

In 1936, Castle Heights Military Academy purchased the property from the Mitchell children as a means of expanding the school. Castle Heights Military Academy chose to turn the Mitchell House into a junior school. The home was remodeled with living quarters for the students on the second floor and classrooms downstairs. A modern kitchen, several restrooms and an apartment were added on to the original structure. During this period the home was officially called “MacFadden Hall.” The young male students who resided in the home were called “Goobers’ so the house also became known unofficially as “Goober School.” It remained home of the junior school for 50 years and housed cadets from all 50 states and all our around the world. The boys called the Mitchell House home and like all homes were rough on it. They carved their names in the window seats and windowsills and slid down the curved banister staircases. They ran up and down the halls during the day but by night they gathered by the grand fireplace on the lower floor to be read to by their housemothers. For these fifty plus years the house was once again filled with love and laughter that the Mitchells had hoped it would hold.

Unfortunately, the school ended its impressive run in 1986 and soon after the boys returned to their homes. The home once again was abandoned and this time remained empty for another ten years. In 1998, Cracker Barrel Old Country Store, Inc. purchased the home. The founder of Cracker Barrel, Danny Evins was a graduate of Castle Heights Military Academy and later served as chairman of its board of directors, while his son attended the school. He and others wanted to return the establishment to the grandeur it had been in the early 1900’s.

Many, however, thought the restoration would be impossible and completely impractical. The home was in a great state of disrepair. There was significant water damage in areas of the lobby, the library and the ladies parlor.

The entire front hall was in shambles. There were gaping holes in the floors and two of the six columns on the front porch had been blown away in a tornado. There was also damage to the moldings, plaster, woodwork, porches and roof. In fact, almost the entire home was in a state of collapse.

Those involved, however, were determined to bring it back to its original state. The restoration team looked for and found the original construction drawings but the drawings did not provide details of the inside of the home. Therefore, the craftsmen worked off old photos that were found in Castle Heights yearbooks and the memories of those who had once walked the halls. Craftsmen restored and replaced trim, millwork, windows, wood panels and ceilings. Existing chandeliers were removed, rebuilt and refinished. The outside stone was re-pointed and cleaned. The porches and portico roofs were replaced and the huge wooden columns were repaired. The restoration, although meticulous, took less than one year to complete and in the end the home was returned to its original condition.

Today, the home is listed on both the State of Tennessee Register of Historic Places and the National Register of Historic Places. Mitchell House is now used exclusively as corporate offices for CBRL, Inc. No longer the home to the young Mitchell children or to the rowdy Castle Height boys, instead it is now a refined, quiet, establishment that not only honors the past but also preserves its history. The beautifully restored house stands on West Main as a tribute to the way life was many years ago in Wilson County. It also stands as a tribute to Dr. Mitchell and all he did for Wilson County so many years ago.