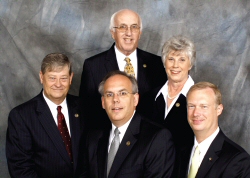 They are the people you turn to when the worst has happened. They help you make sense of the senseless. They keep things together when your world is falling apart. They are the people behind Ligon and Bobo Funeral Home in Lebanon.

Owners David Brooks and Clark McKinney are both licensed funeral directors and embalmers, and they were made for this job. It was at a very young age that the two Smith County natives decided what career they wanted. In fact, when most children dream of being superheroes, McKinney had his heart set on a career path that would allow him to help people when they needed it most. “My baby-sitter’s husband was a pastor, and I would have to tag along when he would preach at funerals. When I saw how he engaged the grieving and offered hope when all seemed hopeless, I knew that I wanted to be part of the funeral business, ” McKinney said.

The two young men became fast friends when they worked side by side at Sanderson Funeral Home in Carthage, Tennessee. It was the first job for both, and they worked so well together it became clear this was not just the beginning of a lasting friendship but a business partnership as well. “We had a passion for this business, and between Clark and me, we had done just about every job in a funeral home, from housekeeping to driving the hearse. So when the opportunity presented itself to own our own, we jumped at the chance,” Brooks with a smile said. And jump they did. In 1993, the pair bought Ligon and Bobo Funeral Home. But to understand the dynamic duo behind the Ligon and Bobo name, it’s first important to learn more about the notable building behind the name.

The history of Ligon and Bobo is almost as rich as the detailed woodworking throughout the stately mansion. It was originally built by Robert Caruthers in 1828.

Like the current owners, Caruthers was from Smith County. Besides being a practicing attorney, Robert Caruthers held several impressive positions at the State and local government levels. He also started Cumberland University’s Law School in his law office in 1847. While Caruthers was elected Governor of Tennessee in 1863, he was never inaugurated since Tennessee was still occupied by Union forces.

Upon Caruthers’ death in 1882, the mansion went through a succession of owners. It wasn’t until 1938 when Charles Ligon and Alex Bobo bought the property and moved their funeral home business into the home that Ligon and Bobo was born.

Ligon and Bobo stayed in the family until Brooks and McKinney bought the property and began the process of renovating the entire building in stages. The 10,000 square foot facility offers space and a comfortable homelike atmosphere. It’s been nearly 18 years since they bought and took over the operation of Ligon and Bobo, and in that time both men have witnessed many changes in the business of funerals. They also agree that some people may find their particular career choice a little strange, but it’s just like any other job. McKinney explained, “Adults have a tendency to shield children so much from death it becomes a source of fear because it’s the unknown. They won’t allow children to attend a funeral service of a family member or family friend. But that simply creates questions that go unanswered. Death is a large part of life. In fact, it’s the only thing we know for sure. It’s important for everyone to understand this is just part of the circle of life.”

It’s at the end of that circle where Brooks and McKinney want to help families and friends say goodbye and celebrate the life of someone loved. That’s the part of the job Brooks enjoys most.

“When a family has experienced a loss like no other, and they still show gratitude for something we did, it makes this all worth it.”
David Brooks, Clark McKinney and the three other members that make up the staff of Ligon and Bobo believe that when it comes to
the end of life, the most important thing to remember is the only life worth living is one that you are really passionate about. And they are passionate about being a part of Wilson County and offering the best service they have.