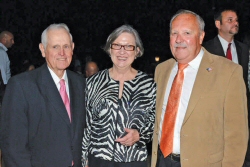 Stratton Bone, Marti Bone & Dr. Ray MillerWLM recently had the pleasure of attending the Goose Gala located at the splendid home of Dr. Ray and Brenda Miller, overlooking the Cumberland River where Goose Creek and the river meet. For those that can remember, the original Goose Gala was the social event of the year, but with the passage of time the event had faded away.

Several years later, concerned citizens formed the Downtown Hartsville Revitalization Commission (DHRC) and were in need of a fundraiser to assist in advancing their mission of restoring downtown Hartsville to it’s former glory. Hartsville has a history dating back to the Civil War with many of its buildings from that era still standing on the town square. The initial focus of the commission has been the restoration and preservation of the historic county courthouse which stands right in the middle of downtown Hartsville. The DHRC, however, has also been just as determined to proceed with their mission at little to not cost to the taxpayer. Thus, with the help of Dr. Ray and Brenda Miller whose home just happens to sit by Goose Creek, the Goose Gala was reborn.

Now in its 8th year, the Goose Gala (as well as grants) has helped raise more than 200,000 dollars, the majority

Southern Image Band Paul Ballou, Terry Canter, Keith Ballou, Tim Canter & Ritchie Gregory of which has gone to the needs of the county courthouse. The renovations have been both internal to the building and external, sparing no detail in the commissions’s efforts to restore the courthouse to the proper dignity and historical context that makes it such a signicant part of the history of Trousdale County.

This year the Goose Gala was an unprecedented success with over 275 plus tickets sold. And like most years those in attendance included not just those from Hartsville but many from surrounding counties as well. Further, the 2013 Honoree of the Gala was Wilson County resident, Stratton Bone, who represented Trousdale County as it’s State

L-R -Janna Sullivan, Pam Gregory, Angie Langford, Amy Fagan, Lindsay Boze & Lisa ScruggsRepresentative for many years. Mr. Bone and his wife, Marti, were overwhelmed with the kind words expressed by many during the evening who have appreciated Mr. Bone’s tireless eorts to help his community. It was noted that Mr. Bone had been instrumental in helping the DHRC become organized, obtain its non-profit status and assisted them on their road to revitalize downtown Hartsville. As noted by Board of Director Tim Roberson, when speaking of Mr. Bone “ the County will forever be indebted to him for his many years of excellent service, both as a State Representative, but most importantly as a friend.”

The evening also included a silent auction, dinner by Odessia Rice of Dessie’s Catering and music by Southern

Stacy Trowbridge & Mark PresleyImage. Photos of the evening events were provided by Erin Highers-Kosko Photography. It was a perfect evening and we were honored to be in attendance for such a worthy cause. Until next year…