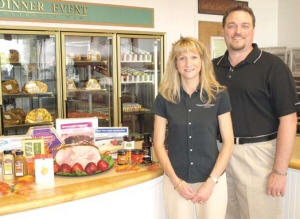 Regardless of whether your holiday festivities will be big or small, chances are that the holiday table in your home will have a succulent ham as its centerpiece. One of the places those from Wilson County can purchase this holiday staple is our new locally owned and operated HoneyBaked Ham Co. and Café.

Regardless of whether your holiday festivities will be big or small, chances are that the holiday table in your home will have a succulent ham as its centerpiece. One of the places those from Wilson County can purchase this holiday staple is our new locally owned and operated HoneyBaked Ham Co. and Café.

For years, Ron and Mary Flesch of Lebanon traveled to Nashville to the HoneyBaked Ham store to pick up their ham or turkey. They had hoped somebody would open a local HoneyBaked store closer to home. When no one else did, they chose to take it upon thems e lve s and open their own HoneyBaked Ham store right here in Wilson County. Honey Baked Ham Co. and Café located in the KMart Shopping Center on West Main Street in Lebanon, was formerly a Heavenly Ham franchise. The Fleschs purchased this business in November of 2007 and in February 2008 converted  the store to a HoneyBaked HamCo. and Café.

The first HoneyBaked store opened 40 years ago. Today, Honey Baked Ham has over 400 locations nationwide. Like many local entrepreneurs, Mary and Ron have always been the type of people who were not afraid of trying something new. Only 12 years ago, they
tried something new when they chose to move to Tennessee.

A few years after moving here, Mary’s parents decided to move here to be closer to Mary and Ron. They had been to Lebanon to visit many times and loved all that the area had to offer. The Fleschs are deeply entrenched in local life. Their three children, Mary Hannah,

Chandler and Chloe attend local public schools and they are involved in numerous community activities. One of the reasons Mary and Ron chose to own a business in Wilson County was to be closer to their children and their community on a daily basis. Like many parents juggling
work and children, the Fleschs yearned to find a way to work in Wilson County instead of making the daily work trek to Nashville. For years they had researched other franchises and then decided upon HoneyBaked Ham, because they believed it was a sound business concept.

Since purchasing the business the Flesch’s have changed and updated the eatery. Honey Baked Ham Co. and Café not only sells hams and turkeys of every kind for holidays, special events and everyday meals but the café also now serves hot sandwiches, soups and salads on a daily basis.

Mary no longer works in Nashville and runs the café on a daily basis. She loves working close to her home and being able to give back to the community by establishing a thriving locally owned business that employs local people. She also enjoys getting to know her customers and neighbors who come in on a daily basis.

The Flesch’s have big plans for their HoneyBaked Ham Co. and Café. They hope to open a second store in either Wilson County or one of our surrounding counties in the very near future.

Ron and Mary think back to when they first made that big decision to leave their old lives and take a chance on a then, small town known as Lebanon. They are so thankful they took that leap of faith. Wilson County has provided them with a safe place to raise their children, a wonderful community in which they can be involved and business that they can be proud of.

They have certainly found their piece of the good life. Go by and see them and support your local entrepreneurs.