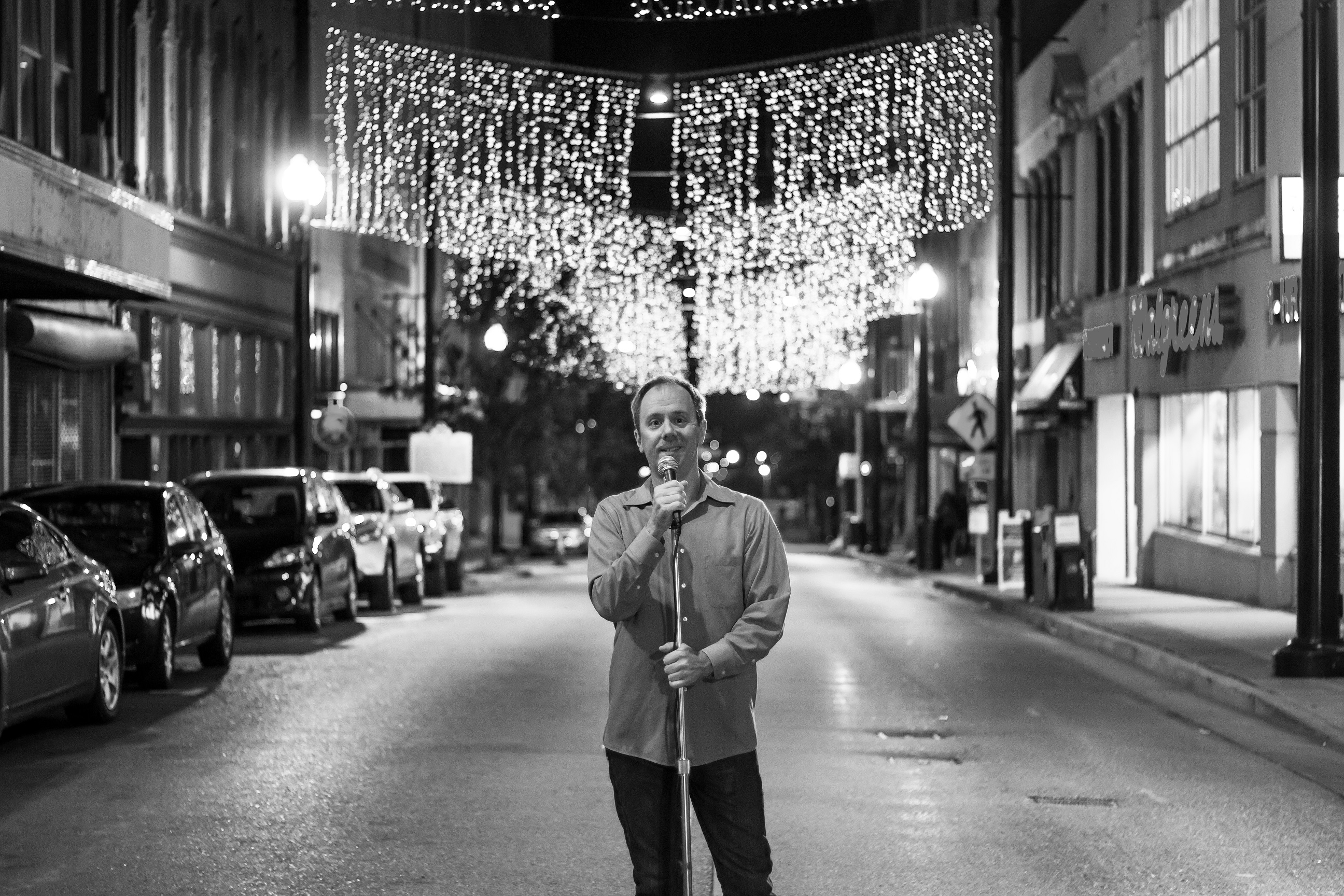 Lebanon original Brian Bates has gone pro… as a comedian

You could say Brian Bates is a thriving late bloomer. He’s blossomed in the comedic world after working in corporate America for nearly 20 years. And by “corporate America,” I mean News Channel 5, where he worked in all realms of upper management, including as the executive director of Talk of the Town and also producer of News Channel 5 Plus.

And, no, this seismic career shift was not a mid-life crises, but more of a wild hare for someone who truly believes you only live once and if you don’t take chances, untapped talents will go, well, untapped.

To leave a steady paycheck, a loving work family and a comfortable future wasn’t necessarily a piece of cake for Bates, 44, who admits the last six months he worked at Channel 5, he squirreled that paycheck away and lived solely on earnings from his budding career in comedy. 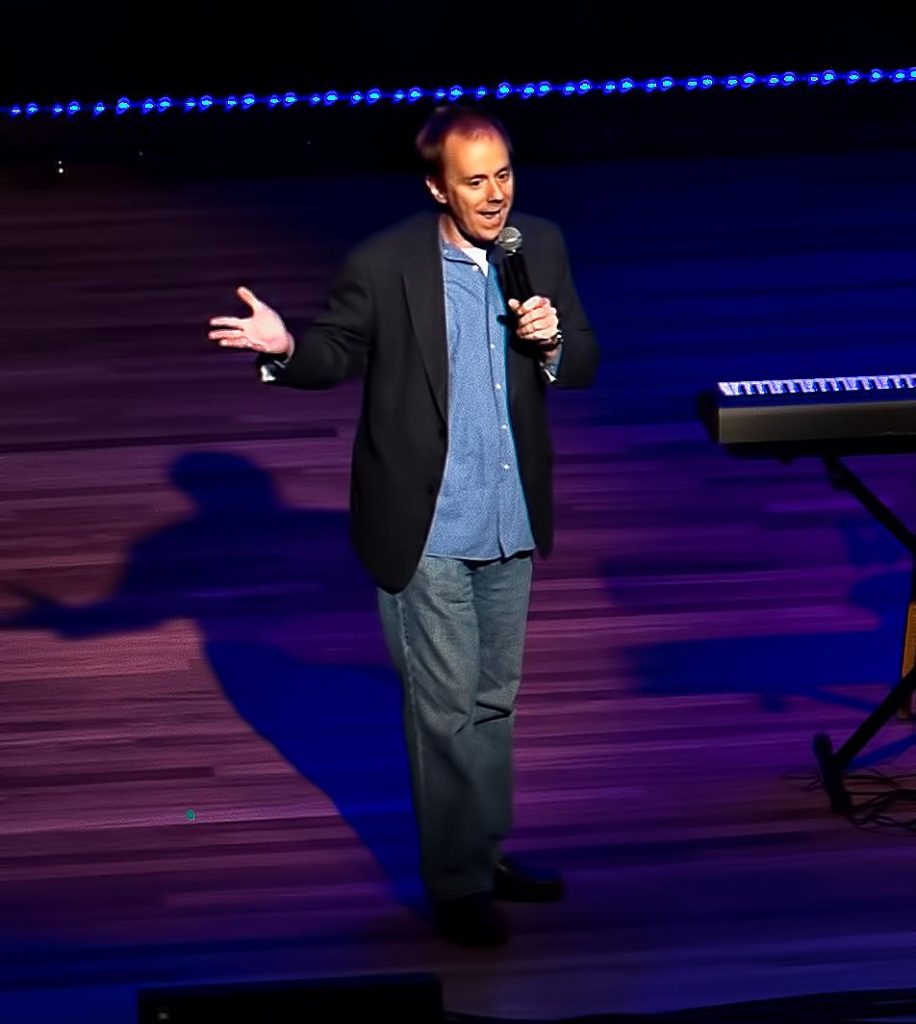 “I loved my job in the news business,” says Bates, who is a Lebanon native. “And, yes, it was hard to leave that family, but everyone was so supportive.”

Along with support from work colleagues and friends, Bates’ number one supporter is mom Helen. It’s because of his love for his mother, Bates is in rare form behind the mic as a celebrated “clean performer” in an oftentimes vulgar world.

“I was raised to be a Christian,” he says simply. “I do not talk dirty and vulgar. That’s not me. Sometimes it’s a challenge to follow comedians who use shock humor.”

And it takes a lot more creativity and talent to get the laughs without using racy, titillating, down in the mud antics. But on the other hand, there’s a lot of work out there in the corporate world on stage, and at churches, civic halls and comedy clubs; all places that want a “clean” opening act.

For a guy who was raised in a rather well known Lebanon family – his dad was Denver Bates of the realtor world and passed in 2006 – to shine on stage at Nashville’s Zanies Comedy Club this past May was “a dream come true.”

On his night, the club was packed, almost without his beloved mom, though.

“Yes, it was ‘church night,’” Bates says with a smile. “And mom doesn’t miss church night. I finally convinced her a bigger miracle that night would be watching me perform at Zanies…”

Helen made it to her son’s Zanies debut, but only after she attended church at a nearby church that enabled her to get both accomplished in one fell swoop.

A common irony, Bates says he’s a bit of an introvert. So true for many comedians, Bates has a quiet demeanor off stage, but has always been told he’s “funny.” When his dad passed in 2006 he found himself looking for a “cathartic boost of spirit.” In 2007 he took a random plunge and enrolled in a four-week comedy class at Zanies.  He was 35 years old at the time.

“The teachers and students were great,” he recalls. “I enjoyed it so much. You don’t know what you don’t know. Rik Roberts was my teacher and now my mentor.”

Bates learned entry-level comedy writing (a far cry from the news casts he wrote so many years) and performance. Right away, Bates knew he loved it so much it became a “very serious hobby overnight.” He began to get booked more and more often. For eight years he juggled his full time news gig with making people laugh on the side.

His comedy is hilarious and unabashedly self-deprecating. His extensive experience in the working world gives him a wealth of material.

“I get a lot of material from the newspaper and local events,” he explains. “I practice and try out my jokes and look for ways to improve.”

His practice run at saving all his corporate earnings for six months proved it worked, and in December 2014 he resigned his job at Channel 5 and became a full time comedian. He tours the nation as a headliner stand up comedian in comedy clubs and theatres, as well as touring with some big names like Henry Cho and Nate Bargatze.

Just recently he showcased at the Ryman in Nashville. Many times he sees fans he met while in school at Lebanon High and Middle Tennessee State University.

Back to his insanely funny material

“My mom is a big inspiration in my act,” he says with a laugh. “I talk about family life and daily encounters. I point out that basically we are all the same. We all have the same insecurities and concerns. I just share examples of them.”

His mom’s struggles with technology get laughs, as well as his dating life, “or lack thereof.” And while he admits in the real world, he’s not the life of the party, but is a very keen observer, which makes for endless possibilities with his comedy career.

“Yep, my brain is wired more to observe and take things in,” he says.

And when he’s not polishing his material for the next show, Bates “takes things in” like utilizing his Titan’s season pass, going to the movies at Providence Theatre, reading on his Kindle, being a “meat and potatoes type of guy” and frequenting Cracker Barrel and Demos’.

As for future acts, they will delve deeper into what it’s like being a single guy in his 40’s and “desperately searching for a wife” in this day and age.  However, that quest will be challenging because the work is pouring in. One night recently he managed three open mics. It’s seven days a week, lots of travel and no vacations.

He loves the view from his home in East Nashville, and he might even go out on a limb and get a dog. His idols in the comedy world are Jerry Seinfeld and Brian Regan. And this month his first album will be released, called “Easy Out.”

His cosmic career shift has been a home run, however, from the looks of his huge fan base, locally and afar.

“Goes to show you can fulfill your dreams, no matter what stage of life you’re in,” he says.

To see where he’ll be next and to get the latest go brianbatescomedy.com