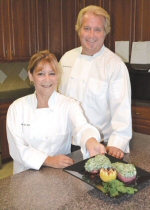 In the 1990s, Mark Cygler worked in the World Trade Center as a foreign currency broker. “I was involved in a trade once that, at the time, was the largest currency trade ever. It was $500 million. I was trading German marks for the ECU (European Currency Units) which was the precursor to the Euro.”

Mt. Juliet, Tennessee is about as far from Wall Street as you can get, but since then Mark, along with his wife Tarra, have found a more creative and fulfilling career as personal chefs.

Mark grew up in New Jersey and attended the University of Idaho, where he played tight end on the football team, and also worked in the food service industry part-time. After his stint in New York City, he returned to the Jersey Shore, where he started a company that provided catering services to beach clubs up and down the shore. He later opened a sports bar called The Sports Page in Long Branch, New Jersey. While there, he met Tarra (now his wife) who did books for the Sports Page.

“We served wings, and burgers, and chili at the Sports Page–typical pub fare,” Mark says. “But later, I started experimenting with a little more exotic cuisine.”

“Everything in New Jersey was so seasonal,” Tarra says. “You had to make almost all of your money from April to October. After that, you would starve until spring, because the work really dried up.”

In 1993, while visiting a lifelong friend who had moved to Nashville for a music career, Mark and Tarra fell in love with Tennessee and decided to move here. Mark took a job as an executive food and beverage manager with the Holiday Inn Vanderbilt, and later worked at Maryland Farms.

He and Tarra moved next door to their friend Danny and his wife in south Nashville. Then something happened that would alter the course of their career.

“One day, Danny’s wife came to us and told us she wanted to surprise him and make him something for his birthday, but she couldn’t cook, so she asked me to do it for her,“Mark says.

“Danny, who has unfortunately passed away, just raved about how good this cordon bleu was that his wife had ‘made,’ and he couldn’t believe that I taught her how to prepare it so well. He said, ‘You should do this for a living. Go around and teach people how to cook.’ This was in 1996.”

“I mentioned to my mother what I was thinking about doing and she said, ‘I just saw an article about an organization called the United States Personal Chef Association,’” Mark says. “She sent it to me and I started researching them. They are headquartered in New Mexico, and they actually brought us out there and trained us on how to set up our own personal chef business.”

Mark bartended at Sunset Grille at night while they got their business up and running. Tarra also had a job at the Holiday Inn on Briley Parkway. They eventually decided on the name, “Gourmet to You” (www.gourmettoyou.com). They launched the business in 1997, and later moved to Mt. Juliet.