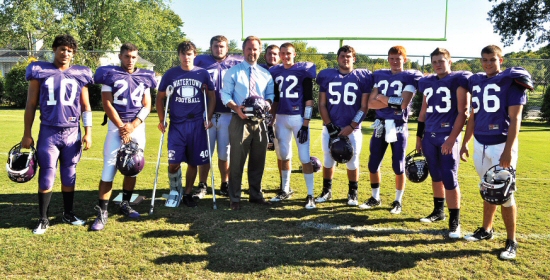 I remember suiting up for the big game, you know the one. Every high school football player, who grew up in a small town, has that special memory of playing against their arch rival. The smell of freshly cut grass, the sight and feel of chalked yard lines, the Friday night lights, and most of all the sound of a cheering crowd. As we walked onto that field that Fall night, the sound coming from the stands was motivating.

I recall the game as if it were yesterday. It was my senior year, Watertown High v. Friendship Christian, behind the hedges in Watertown. During my study hall that Friday, I had helped Coach Bill Robinson chalk the field and then, after school, stopped in to buy a new pair of white game socks at Watertown staple, Russell’s Men’s Store, on Main Street.

Today, they paint the sidelines and hash marks instead of chalking them, and Russell’s Men’s Store is no longer around either, but those memories still remain. There was electricity in the air as the game got underway, or at least it felt that way to this 17 year old kid. Growing up in Watertown there was nothing quite like playing the “hated” Friendship Commanders and we were all up for the game, coaches included.

Coach Robinson, Coach Rick Martin and the late Coach Don Franklin were as nervous…and pumped as we were. And man, was it a great night for football! I scored a touchdown and had an interception in that game, which, believe me, was not a common occurrence for someone with my somewhat limited athletic abilities. Our Quarterback, Bobby Brown, scored five, yes five, touchdowns that night. With talent like that, he went on to coach Lebanon High School for a number of years. Brandon Mang and Byron Lee played hard for Friendship but in the end Watertown was victorious! The score was 41 – 7. Smackdown!!

And afterwards, like we always did, the team descended on Gondola on South Cumberland Street in Lebanon to celebrate.

My senior teammates were all there: James Vaden, Kirk Thomas, Winston Beard, Terry Tarpley, Chris Stephens, Guy Buckner and Kevin “Spaceman” Roberts who would be my roommate at MTSU the following year. All men I continue to call my friends today.

We graduated that spring and life moved on, but the memories of playing those Friday night football games are some of the fondest that I have. The shared comaraderie on and off the field, the brutal practices every day after school, suiting up for the game and the pep talk from the coaches beforehand, the passion when we were victorious and the agonizing pain when we were defeated.

Those Friday nights would shape us in more ways that we knew. And for many of you who grew up in this area, I’d say you share the same experience. Be it Lebanon, Mt. Juliet, Carthage, Gordonsville or Hartsville – those Friday night lights were brilliant.