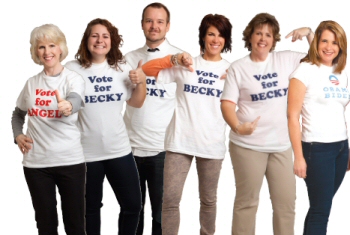 Wilson Living Magazine turns four….
and sure could teach Washington something about working together and reaching across party lines…

It’s hard to believe that just four years ago, Becky and I were sitting in Sam Hatcher’s office pitching an idea about a local lifestyles magazine, and today we are again in those same offices – but this time with our own desks, phones, computers, and whiteboards. (We’ve basically taken over!)

For those who don’t know the back story – Becky and I finagled our way into a meeting with Sam four and a half years ago. We believed our magazine idea was just fabulous and we had determined, Sam should be so lucky as to help us start it! And why wouldn’t we be successful? I mean, we both loved to read and write, what more was necessary? It couldn’t be that hard, right?

I distinctly remember him laughing and saying “Sure ladies, let’s try it.” And knowing Sam as well as we do now, that lunch he said he had to get to as he scooted us out of his offiice…didn’t exist. But somehow we pulled off that first issue and were thrilled when the emails and calls started coming in after the first issue of Wilson Living Magazine was delivered in the Wilson Post on October 31, 2008.

Our idea that Wilson County was a pretty special place and people were ready to show it off – was right on target!

Four years later, 24 issues later, two website redesigns later, and four Holiday Expos later, we are still at it – only difference being – somewhere along the way – we figured out how to do it! (And also figured out, it wasn’t quite as easy as we had first imagined!)

Our team has grown from just the two of us at a kitchen table to a whole team of professionals working on the magazine, every day. So it seems completely appropriate that this issue’s Meet Your Neighbor should be about the Staff of Wilson Living Magazine.

One of the benefits of running the magazine is that Becky and I have had the opportunity to meet so many people in our community. We feel we know everyone and we actually love it when people we don’t know, come up to us and mention they feel as though they know us. So it’s about time – we had a formal introduction….don’t you think?

Therefore, I’m honored to introduce you to Your Neighbors at Wilson Living Magazine.