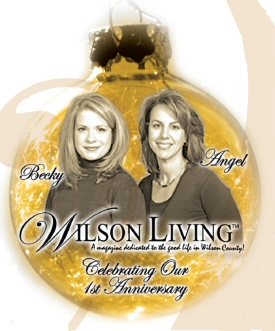 This week marks the first year anniversary of Wilson Living Magazine, a bi-monthly publication about lifestyles in Wilson County and distributed through the circulation of The Wilson Post and at various news stands and dealer locations throughout the county.

The new edition of Wilson Living, the special one-year anniversary edition, will be available Friday.

As Becky Andrews and Angel Kane share in the excitement of the magazine’s first year anniversary and remember the history of getting the publication launched, they recalled this week that the experience has been a “fantastic voyage.”

“Becky and I are often asked how the magazine came to be. Our answer is always the same, a little luck, lots of friends and a good bit of hard work,” said Kane, who when not spending time dealing with her part time chores with Wilson Living, is a fulltime practicing attorney in Lebanon.

She said the idea of a lifestyle magazine first “sprung to life” one afternoon when she was returning to Lebanon from Memphis.

“Before making the drive back home to Lebanon, I stopped in a bookstore to find an easy read for the ride home. I picked up a local magazine and for almost two hours straight I read about all that was happening in Shelby County. Even though I didn’t live there, I was enthralled by the personal stories set out inside the colorful pages of the magazine,” Kane remembered.

She said that night when she came home she called her “good friend” Becky with whom she was already writing the “Telling Tales” column for The Wilson Post and “in one of those crazy moments I mentioned that we needed a magazine all about Wilson County and said I bet we could put one together.”

“At the time, the fact that neither of us knew the first thing about magazines didn’t seem important,” she recalled, adding “where another friend would have discouraged such an insane idea, Becky said, ‘let’s do it!’”

Andrews and Kane said their first call was to Mary Beard, a former local educator and school administrator and a person whom she described as a “beloved friend and mentor to both Becky and me. We knew her advice would be golden.

“Our second call was to Sam Hatcher and John Bryan of The Wilson Post. Both of these men have been in the publishing business for years and their dedication to providing substantive news to Wilson County was our inspiration. Before long the idea was a reality.”

Andrews and Kane recall that at the beginning and along the way “we leaned on friends to help us out.”

Kane credits Richie Bouton’s “fantastic images” as being a major contributing factor to “making the magazine so beautiful.”

“He (Richie) calls us ‘the girls’ and puts up with our antics as we ‘direct’ him during photo shoots.”

And Andrews, who is largely responsible for the magazine’s advertising content, says Wilson Living graphic designers Julie Brackenbury and Donna Neely are responsible for giving the magazine its “flair,” adding that there have been “many a lunch and dinner spent with these wonderful women, laughing and carrying on as we have laid out the magazine.”

Both women cited Lynda Burge, a Lebanon real estate professional, whom they described as “our resident ‘whatever you need I’ll do it’ person. Her devotion to helping us is much appreciated.”

Kane recognized “our favorite Australian, Peter Beare,” as the magazine’s web guru. She said he likes to call each of them “Mrs. Murdock,” because they are constantly “hounding” him with new ways to expand the magazine onto the Internet.

In a one year, Wilson Living has gone from a late night telephone call to a magazine published six times annually and read by more than 50,000 readers. As Kane and Andrews put it best, “It’s been a truly incredible year.”

Kane, Andrews and the Wilson Living staff extended a special word of thanks to the magazine’s advertisers noting that the revenue generated from advertising is used to help offset the costs associated with publishing the magazine.

“When we first approached many of them, all we had was an idea. But they believed in us and believed that a magazine dedicated to the good life in Wilson County would be a benefit to the community. Their generosity is why Wilson County has this magazine today,” Kane said.

“And finally to you, our readers. Your emails, calls and letters are an inspiration. What we learned this year is that you love this area as much as we do. Thank you so much for sharing your lives with us.”

We hope you enjoy our one year anniversary issue and the many more issues to come!

Notes From The County

Got it today & it is awesome !! Great job. I am never disappointed. Pamela Ashbridge Reeder

Picked up my first copy (ever) today…Wonderful mag! Enjoyed the article on the Wilson County Fair. This is a first class publication, I will be looking forward to future issues!  Pat Scales

We got back from vacation on Saturday evening–and as I was going through the week’s mail, I saw the magazine and found myself reading it at midnight! I couldn’t help myself!!!  All the Best Wendi Warren

I want to commend you on the incredible job that you’re doing with the magazine.  I have been EXTREMELY impressed ever since I received the very first issue with the quality of the articles and the photographs. There are very few magazines that I just have to drop everything to sit down and immediately read when I first get my hands on it, but Wilson Living has that effect
on me. You are doing a great service for Wilson County, and I wish you much success for years to come! We are very thankful to be advertisers in your beautiful magazine, and I hope we will have a long working relationship together in the future.
Thank you again for your conscientious work and the gift of your talents in producing Wilson Living.
Ramona Crutcher, Ramona & Co.
P.S.   I also enjoy reading your humorous articles in the Wilson Post – I can often relate!