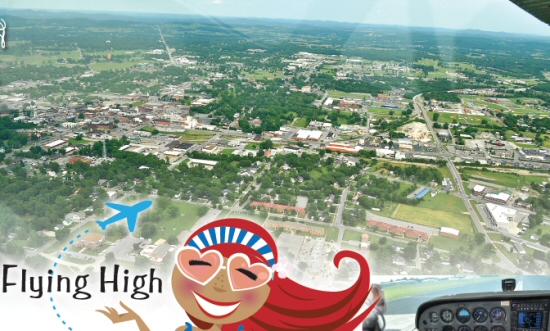 When I was very young my father decided to get his private pilot’s license – again. He’d had one decades before, and some of his friends were interested in getting into the pilot’s seat, as it were. I remember the torn tail of a dress shirt framed and hung at the top of the steps in the house where I grew up, a memento of his first solo flight – it had a small line sketch of an airplane on it, which is still the only way I can draw airplanes to this day.

Before long, Daddy had a tan Cessna 150 and was sharing hangar space at the Lebanon Airport with a friend. I grew up flying to Bowling Green for supper, to Gatlinburg for the weekend, to a golf club at Land Between the Lakes for lunch. I remember watching the plane get smaller and smaller as I glanced back at it while walking over impossibly green, grassy mounds to the restaurant, the sun burning my hair, and the plane shimmering in the heat. I didn’t want to leave that tiny cabin, that thin air, the sight of my father in his glasses and headphones, his voice filling my head, for a moment, even to eat. I could have stayed in that little plane forever.

But after several health setbacks my father didn’t renew his flying license, and I grew up, but never lost that taste of high, thin air, that rush in the pit of your stomach as the plane lifts and the ground drops away. I developed a love for commercial airplanes and flying – even of airports. I’ve flown all over the world, but I must admit that my favorite times were in the cockpits of those little Cessnas, soaring over the South.

So when I was asked if I was interested in taking a “discovery flight” at a local airport, I obviously jumped at the chance. And I wasn’t even wearing a parachute.

The discovery flight was scheduled for me at Murfreesboro Aviation through LetsGoFlying.com. Murfreesboro Aviation owner, Jim Gardner, was on hand to meet me. He arranged for me, and talented photographer Donna Neely, to fly with Joseph Chance, a young pilot from Memphis, who had completed the MTSU pilot program. He said there are hundreds of pilot students at the University now, and many of them got off the ground with the same sort of discovery flight I was embarking upon.

A discovery flight is just that: it is meant for you to discover if you are interested in becoming a pilot. I must say that while the flight was impossibly exhilarating and satisfying (I lifted the plane from the runway to the sky, but Joe sat us back down) there is a lot that goes into flying one of those little Cessnas. The cockpit was familiar and stirred up a lot of memories for me, but there are dozens of instruments and graphs and pictures – almost like being trapped inside a Geometry book. And if there’s one thing I’m not proficient at, it is math, or graph reading, or landing a plane, apparently.

But while we were in the sky, life was airy, open and free. It was surprisingly easy to see where we were and where we were going – just follow the line of Hwy 231 straight to Lebanon – but keeping the airplane level and on track was just as surprisingly difficult. I kept trying to use the gauges and horizon line instruments to keep level, while Joseph insisted I simply watch the sky. Visibility seemed endless, as the day was warm and sunny and clear. We zipped over to Lebanon with no problems, chatting about Joseph’s plans to fly commercial planes, and my plans to make it back to the ground in one piece to have dinner with a friend.

The entire flight took right around a half-hour – we were over Lebanon in less than 15 minutes. We circled the Square, Donna snapping away at various Lebanon landmarks along the way. I unsuccessfully tried to find my little cottage near Cumberland, and we “oohed” and “ahhed” at the layout of our City below us, so much like a toy train set or a dollhouse village.

From such a height it was easy to see how blinded and constricted we all become in our own lives – looking at Lebanon from above, I saw the bigger picture of my life. I saw how, whether you’re miles above the earth or stepping out of your front door in the morning, the world really is laid out at our feet, opportunities are everywhere and available if we can just take a step back, look at the big picture and get out of our comfort zone for a little while.

I guided the plane back to Murfreesboro, eyeing the sky, watching the horizon this time instead of the airplane instruments. I trusted my instincts and my hands followed, moving in a slow, calculated measure. I felt calmer and more alive than I had in a long time, and when my feet touched solid ground again I also felt an affi nity with my father; knowing the freedom and control of flying a small aircraft with only a thin layer of metal and a spinning propeller between me and empty sky.

But I also knew that there were rudders and steering components on the airplane that kept it aloft and guided the way, just as there are aspects of my life that help keep me on the right path – they don’t control me, but they help guide the way.