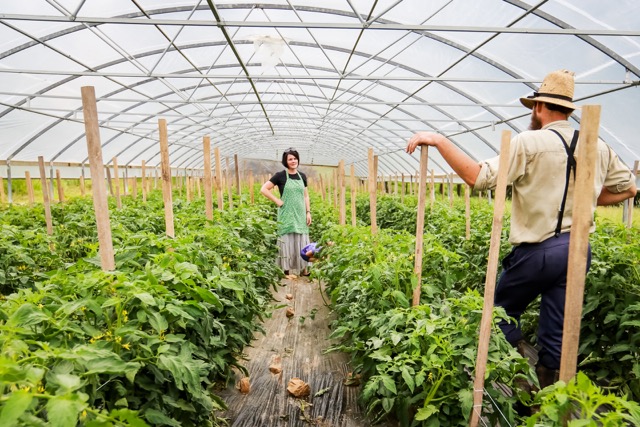 Twice a week Stephanie Bradshaw transports herself back in time to Mennonite country where the air is clear, things are simple and the soil is rich and fertile – and free of chemicals.

However, it’s not a sightseeing respite to simpler times.

She has a mission. 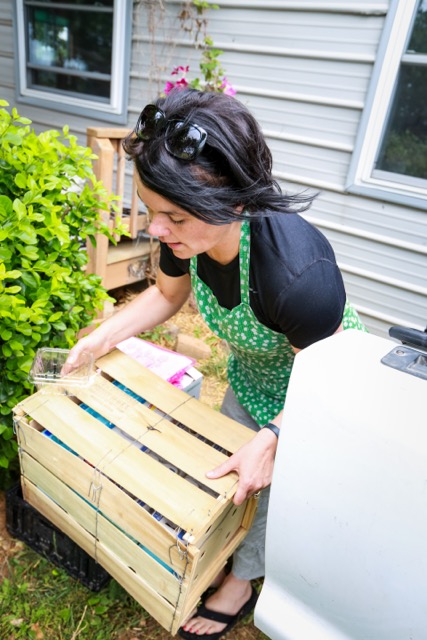 The farmers there are her friends and partners in their goal to get fresh, affordable fruits and veggies in the hands of others in our area.  This wife of a Watertown High School coach and teacher and mother of four makes weekly visits to Mennonite-operated Golden Rule Farm and Rolling Acres Farm in Scottsville, Kentucky and comes back several hours (and many miles) later to Wilson County.

Her hearty Ford Excursion (she ruined her minivan with the weight of all the greens), trailer attached, is loaded with dozens and dozens of half bushel boxes. They’re filled to the brim with what people far and wide consider the gold standard, or we should say “green standard,” of the freshest, most affordable, nutrient-dense produce found around these parts.

A trip to these rare farms brings people back in time, with Purple Martin gourds strung on a wire, simple garments flapping on a clothes line, open windows, no electricity or plumbing, and dozens of children simply playing catch. Many of the charming people to be found here are also picking and packing boxes of fresh veggies for Stephanie to bring to Wilson County and beyond.

Around this time of summer, those bushels are filled with berries, peppers, tomatoes, beans, summer squashes, broccoli, sweet potatoes, carrots and melons. 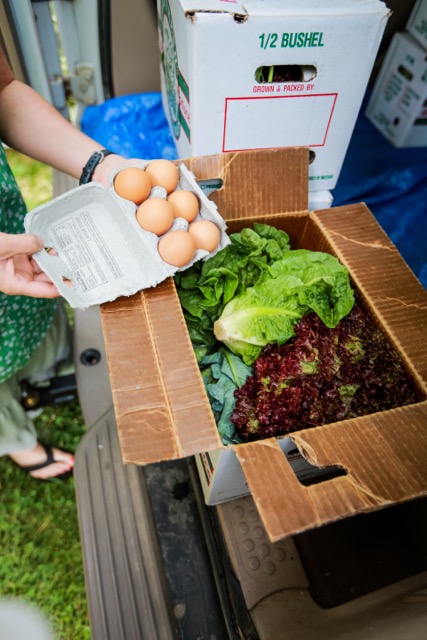 These fresh commodities are then dispersed to some 400 families across middle Tennessee (200 in Wilson County alone) who are members of Farmhouse Delivery CSA. For those new to all this, CSA stands for “community supported agriculture,” which is a huge green and organic movement sweeping the country and beefing up farmers who choose the organic route. Stephanie is a facilitator in our area for one of these distribution systems. 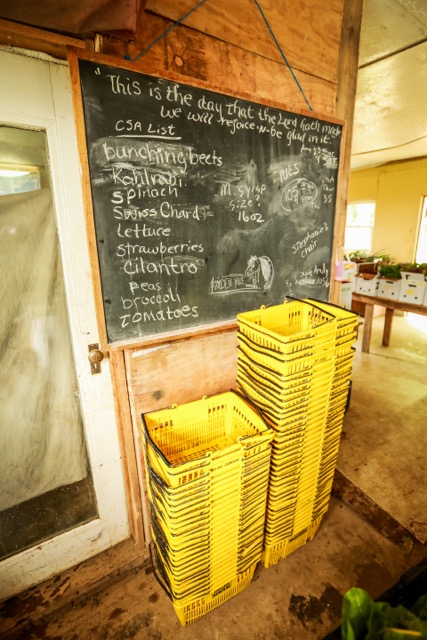 She happened upon her current mission in an unusual and heartbreaking way.

It all started when her best friend, Kristina Schlegel, faced her biggest challenge of stage four breast cancer at the young age of 33. She was a wife with two young daughters. This was in 2006.

Stephanie did what she could to support her friend throughout the next year. In 2007, Kristina lost her battle. This affected, and ignited, Stephanie.

“I realized how our bodies are so dependent on healthy food,” Stephanie said.

Already a proponent of juicing as a healing method, she began to research the benefit of raw milk and eventually started a popular raw milk co op. That’s when she met the Brubaker family in Scottville, Kentucky.  At first she was infatuated with their fresh, pastured eggs, and the relationship grew.

As a wife of a coach and teacher, and homeschool teacher  to her children, she knew she wanted to give them fresh, chemical-free veggies and fruits, but could not afford “an arm and a leg” to buy them locally. 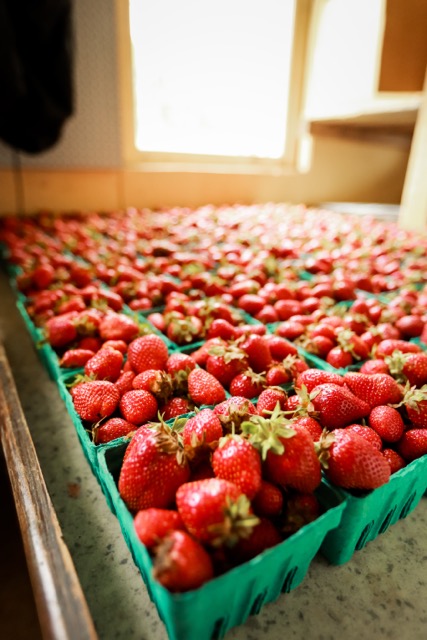 in Kentucky and wanted to share the bounty with others. It was a Bible verse that led her—specifically, Proverbs 31, which talks about a woman gathering food from afar.

She’s partnered with two Mennonite farmers in Kentucky who grow their food in an organic manner and now offers people the ability to purchase a membership at menial cost that provides regular access to these wares, by the half bushel. Stephanie goes to Kentucky and picks up the fresh produce bringing it back to families eager to share in support and harvest of their farmer.  Members pick up at  local drop-off locations on Tuesdays and Thursdays.

Drop off spots include the ESC Lab in Mt. Juliet, south Mt. Juliet’s Center Chapel Church of Christ on Central Pike, Blackwell Real Estate and the Corn Crib in Lebanon, and the Rutherford County YMCA in Murfreesboro.  On Thursdays she delivers to Spring Hill, Franklin, Smyrna and Nashville, as well as East Nashville.

“We’ve been wanting to eat local, organic foods, but it is hard to get those at the grocery without it costing a fortune,” said member Nicole.  “This was so much better, and affordable. We’ve learned how to use some new ingredients and 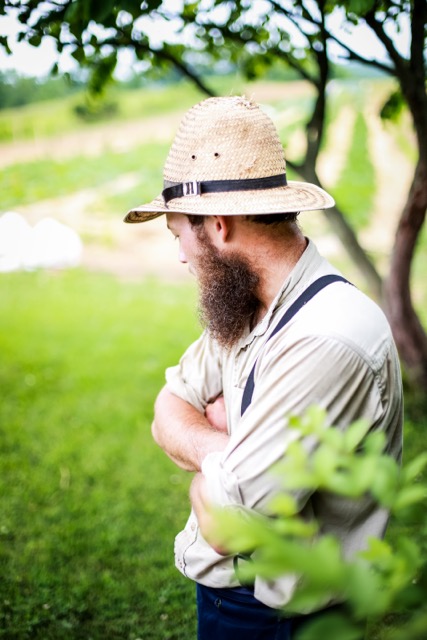 some recipes that feature the produce instead of reducing it to a side dish. We highly recommend joining Farmhouse Delivery CSA. It is cost effective in the long run and it feels good to eat healthy and support a local farmer!”

One of those farmers is Thomas Brubaker. He helps Stephanie load up his chemical-free produce to be taken to Wilson County and beyond each week. In the partnership, he’s been able to set aside some of the profits to buy back land, restoring the farm to its original size. With his older children reaching adulthood, this will provide opportunity for future growth. The other farmer is Nelson Gingerich, pictured on these pages, who in accordance with Mennonite tradition doesn’t allow his face to be photographed but was gracious to allow the photographer to get a few from the side. 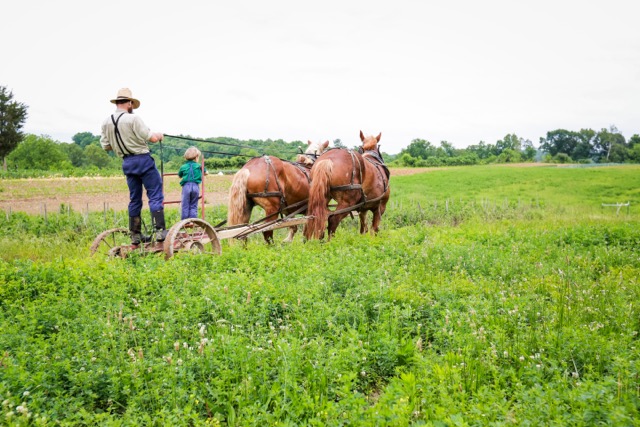 Farmhouse Delivery has grown from 40 to 400 families in a very short time period.

“I’m passionate about seeing both sides of this endeavor,” Stephanie said. “I see the farmers, so hard working, honest, ethical and dedicated to growing nutrient dense food; they are beautiful people.  And also seeing so many families being nourished with healthy, healing produce. It’s fulfilling, all the way around.”