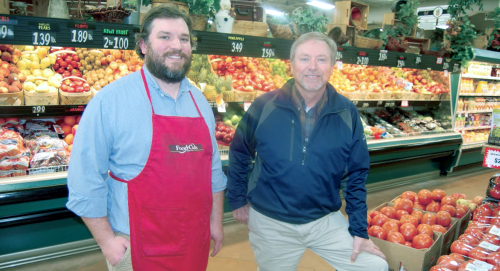 With help from a loyal group of veteran employees, father and son Al and Jon Carman keep things running smoothly at Al’s Foodland in Lebanon. Their grocery business was begun by Al’s late father, Al Carman Sr., in 1968.

PHOTOS AND STORY BY KEN BECK

In an era ripe with ever-sprawling national grocery chains and megamarkets, one Lebanon neighborhood corner grocery continues to chug along fine and dandy.

At 45 years of age and counting, Al’s Foodland remains delightfully quaint in many ways, a throwback to the 1960s and ’70s, yet the personal touch, friendliness of its employees and topnotch meat market and excellent produce, much of it locally grown, have kept savvy shoppers loyal for decades.

“Customers who come into shop with us are our neighbors,” says owner Al Carman Jr., whose late father, Al Carman Sr., founded the store as Al’s Food City

Produce manager Del Perry, a 15-year veteran at Al’s, keeps the banana bin looking spiffy. in 1968. “We want to make sure they are happy with what they buy. If you just treat customers the way you want to be treated, then the business will turn out OK.

“We’ve been very fortunate, very blessed to be in a good neighborhood. It’s so nice to know your neighbors as customers where we can say hi and catch up.”

Long time Lebanonites will recollect a number of family-owned grocery stores that flourished 40 years ago but due to a variety of factors, mostly economics, have gone out of business. Places such as Dick’s Food Mart, Lebanon Food Center, Mosers (on South Maple), Mosers East High Market, Denny’s East High Market, King’s Market, Tyree’s Market, Coffee’s Grocery and Eskew Grocery will ring a bell for many.

Carman describes his business as “a neighborhood grocery with local flavor and an easygoing organization. We don’t have a corporate business with its stress and rigidity of rules. The big difference, I think, is that corporate stores get so caught up in numbers and performances with the pressure put on them to produce.”

Jeraldine Graves, who lives on a farm with her husband, has been buying groceries here since Al Sr. opened for business five decades ago.

Cashier Ashley Turner holds young Madison Lokey, the daughter of a familiar customer, Doni Lokey, while sacker Zach Gardner, a Lebanon High School student, fills the shopping cart on a busy afternoon at Al’s Foodland.“I shopped at the old store when Mr. Al had it,” Graves says with a grin as she begins to tour the aisles and fill her cart. “I think it’s the best grocery store in Lebanon. “Al’s is noted for its meat,” she said, sharing what is no secret in the Cedar City. “I plan my meals around what Al’s has on sale each week, plus what we have canned and frozen.”

A personal perk for Al’s customers noted Carman, “We have the flexibility if a customer asks for a product, we’ll bring it in here if we can find it.” (Among unique foods and beverages found here are Bingham’s Country Hams, chicken pulley bones, chuck eye steak, Spring Valley Farms jams, jellies and preserves and Coke Mexico in glass bottles.)

Al’s son Jon, who began working here in his early teens bagging groceries, serves as his right hand. Besides handling front-end management, Jon works in customer service, deals with vendors, pricing and the computers. He sees a big difference in management, service and relationships compared, say, to Wal-Mart or Publix.

“Being smaller in size you have less employees. It’s a family environment. You get to know so many of your customers from seeing them every day. There are local businesses that we buy and sell from. Those partnerships and all of this differentiates us from larger stores,” said Jon.

A 2001 Lipscomb University graduate with a degree in accounting and finance, Jon also holds a master’s degree in business administration. He began his professional career at an accounting firm and soon realized it was boring.

“I would come home from work and my wife would ask, ‘What did you do all day?’ ‘I filled out these papers,” I told her. I decided to get out of accounting. The grocery store is so much more an active job, fun, being with people.

“Part of the reward for me, you always like to help people. It might be helping them find something, or they’ll say, ‘This is the only place I can get this,’ or ‘You’re the only one who helps me with this.’”

Jon also emphasizes the wide variety of local offerings the store places upon its shelves.

“We have a partnership with Clayborn’s Bakery and sell their pies. We get our catfish from Cool Cat Catfish from Kentucky Lake and our honey from Brewster’s Apiary from Castalian Springs,” he said.

Summer produce comes in the form of dill and spices from Huddleston Farms, tomatoes and vegetables from the farm of Jason Greer, okra and zucchini from Leat’s Greenhouse and blackberries from Sun Fresh Farms.

Yet another major reason for Al’s Foodtown’s success is the loyalty and work ethic of its staff.

“We just always seemed to have great employees here,” said Al. “About a third of our employees are the second generation in their family to work here. We

Stoney Hunt, left, and Glenn Simpson, aka “Mr. Glenn,” are among the butchers responsible for giving Al’s Foodtown the reputation of having the best meat in Lebanon. Their combined time of service at Al’s tallies nearly 50 years. get a lot of high school kids who work here, then go to college, so it’s a great starter job.”

When the grocery opened in 1968, it employed 17 to 18 workers. Today, Al’s provides jobs for 45, the majority of whom live in Lebanon.

Store manager Glenn Simpson, aka “Mr. Glenn,” came to work here in 1989 and knows the store from front to back, especially the meat market in back. Ask him why Al’s has such a sterling reputation for meat, and he will joke, “Because I run the meat market.”

Seriously, he says, “I been cutting meat for 50 years. I tell my employees, ‘You can get a can of corn anywhere, a drug store, a service station, but you can’t buy good meat everywhere.’ “We push meat and produce. We built the meat business in the old store, and it’s just got better”.

“When I came to Lebanon, Dick’s was the place to buy meat, but we changed that. We buy good meat. We hand cut it with a knife seven days a week. Our motto is please the customer,” said Simpson.

Pat Hodge first clocked in at Al’s in September 1990 as a cashier,but she’s done just about everything and now runs the deli-bakery and handles some of the front-end management.

“It’s a good place to work, pretty pleasant. The customers become your friends. I seen ’em born and grown,” she said. “This job keeps you hopping.”

Nineteen-year veteran cashier Robbie Perkins says, “I have fun. Ilove all my customers. We’re real tight. I plan to work here as long as I am able,” and produce manager Del Perry, who holds 15 years of service, says, “We’re more like a big ole family.”

Ashley Turner started here four years ago at 17 as a cashier. An office helper now, she graduates from Volunteer State in May and plans to find a job as a veterinarian technician.

“I love it here,” Turner said. “I got to meet a lot of different people. This job helped me learn how to be responsible.”

The grocery store has proven a life training ground for hundreds including Al Jr., who did sweeping, bagging and stocking here when he was a teenager. His father had been a meat cutter for Kroger for years before he opened a store in Nashville in 1961 and later moved to McMinnville where he owned and operated Mount Leo Foodtown.

“Dad was on the look for a grocery store. He bought Southland Foodland from Van Rogers, and we moved here from McMinnville. I was a freshman in high school,” recalled Al.

Transforming Southland into Al’s Food City, Al Carman Sr. operated his grocery until 1979 when he sold the business but leased the building. In the

A cashier for 19 years at Al’s Foodtown, Robbie Perkins, right, assists friend and customer Faye Agee. Says Perkins, “I love all my customers. We’re real tight.” meantime, Al Jr. earned a degree at Lipscomb University and in 1977 opened his own Al’s Foodland in White House, Tenn.  Under new ownership in the early 1980s, the Lebanon Al’s Foodland was struggling.

“Dad came to me and said, ‘These guys are not gonna make it, and I need the income from the rent for my retirement. You ought to buy this store,’” said Al. “I came over and decided to buy it back in 1985. It did pretty good, and the Castle Heights bypass was not there then.

“I started buying a little property around the store. It took me about six years, and I got the properties I needed. We needed a bigger store, so we built this store in November 1998. We tore down the old building, and I built the Subway [sandwich shop] building.”

With Al’s Foodland nestled in the hands of second and third-generation family members, it remains a good place in the neighborhood and a Lebanon icon.

“I try to be a cheerleader. I try to encourage and add my two cents’ worth if something comes up. It’s a small business. You don’t have to jump through hoops or get permission slips to do everything. We just operate in a way and manner  that we deem to be best,” concludes Al.

Displayed across an inside front wall, the store motto reads: Stack it deep & sell it cheap.

But the fact is there are some things at Al’s Foodland that are not sold but simply come with the territory, free to those who regularly stop and shop in this neighborhood grocery. The gifts include smiling faces, genuine greetings of how-doyou- do and friendly, personal service that’s hard to beat.

Now as for Al’s great meats, for those you will have to pay.