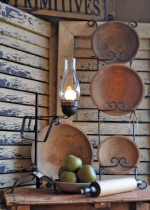 When the doors to the original Watertown High School opened to grades one through 12 in the fall of 1911, in a roundabout way, Charlotte Huddleston Johnson, 69, was there.

She’s no time traveler, but due to her grandmother’s habit of saving every little bit of scrap of paper as well as writing notes, Charlotte knows the details as well as anybody of September 6, 1911, when the cornerstone was laid in that brick, two-story structure dedicated to educating the young minds of southeast Wilson County.

You see, her great-grandfather, Dr. James L. Davis, served as president of the Watertown Board of Education 101 years ago. And her grandmother, Marguerite Davis, class of 1915, was 13 on that special day and placed a copy of her father’s speech in the cornerstone.

Marguerite was still in Watertown 70 years later on Nov. 13, 1981, when that 1911 cornerstone was plucked from

its place of pride in the old school, which was being demolished, only to be put in a special niche of the newly remodeled Watertown High School. “They were tearing down the old high school to have a place to build the new school,” says Charlotte, class of 1961. “I remember she was the only living person at that time that had put anything in the cornerstone. She was almost 84. She lived to be 100 and died in 1997.”
Charlotte’s sister, Margaret Huddleston Gwaltney, class of 1968, was also a WHS graduate, as were their parents, Billie Love Cathcart Huddleston and Howard Huddleston, class of 1939.
So Charlotte, who lives in Lebanon, can tell you that her hometown’s first high school stood proud for 70 years. Created for 12 grades, that original building became the elementary school in 1929 when the second high school building, a three-story structure, was erected right beside the first one. Today’s Watertown High campus was built in 1964 and remodeled in 1981. And hopefully, in a few years, Watertown High School No. 4 will be raised on the other side of Highway 70 along Neal Road. No doubt, Charlotte’s great-grandfather, who died in 1935 at 69 years of age, would be elated by the thought.
“He stressed education from day one to his children. Granny (Marguerite) always said he wanted them to all get an education and was insistent that they all go on to college. He sent himself through school. He knew he didn’t want to farm. He became a doctor, graduating from Vanderbilt in 1893,” said Charlotte of Davis, who was born and raised on a farm in Statesville and operated a practice for seven years in Norene before opening an office in 1900 on the west side of the Watertown square.

On the Watertown Board of Education along with Davis 101 years ago were T.R. Patton and William Phillips. They and the residents of the community raised nearly $10,000 to build that first school and hired Nashvillian Joe W. Holman as architect.
The dedication program on that momentous day featured the Lebanon Military Band performing the Star Spangled Banner and Watertown school children singing America. The honor of laying the marble slab cornerstone were given to Charles Comstock of Crossville, Tenn., grand master of the Tennessee Masons. As for the plentiful items placed in the cornerstone, these included the Holy Bible, rosters of the officers of Watertown, the school teachers, and the officers and directors of the Bank of Watertown. Also put in the hollow of stone were the town ordinances, copies of Watertown, Lebanon, Alexandria and Nashville newspapers and a mint-condition 1911 dime.