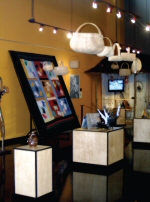 The Middle Tennessee region has a rich history in the arts. From the unique crafts that evolved from necessity, to the sounds of the old-time music passed down through the generations, Middle Tennessee has developed a distinctive style all its own. But, whether you enjoy live stage productions, artwork, or the diverse styles of pottery and jewelry created in the area, there is a place where you can find something for every interest.

The Art Center of Cannon County arose from humble beginnings through dedication and hard work from volunteers. Located in Woodbury, Tennessee, the one-time simple community playhouse slowly grew into what is now a hub for arts activities, creative expression and the preservation of the local arts and crafts.

“The organization started from several other organizations,” said Donald Fann, Executive Director of the Art Center of Cannon County. “The oldest was the Cannon Community Playhouse which started in 1980. The fi rst season was done in the Lion’s Club building. After that, they talked to the County, and the County gave them the basement of the old high school gym. The high school itself had burned down, and the gym was being used for various things. So, they offered them what was essentially the old coal room, or old boiler room. The organization shoveled out all the old coal, drug all the stuff out, found some old theater seats and built some platforms. For ten years they lived in the basement of the high school gym, with two poles right in the middle of the stage, with the basketball floor immediately above. The theater had a nine-foot ceiling and sat about one hundred people, and they rehearsed with a basketball practice going on right on top of you.”

Fann says the early days of the playhouse were difficult, but a following was built up and the organization began to look to the future. “The organization built itself up at that point, and in that first ten years put away $60,000. Sometime around 1988 or 1989 they began looking forward to building an art center. The organization started a capital campaign for $300,000 to build the facility. The original facility was about 6,000 square feet as designed. They raised that $300,000 with only two gifts above $10,000. The rest were very small, very grassroots-oriented gifts that were given to the organization. They asked people to pledge over three years, and at the end of that three year time period well over ninety-percent of those pledges had been fulfilled.”

As the Art Center grew in popularity, other venues were added to the schedule. From doing a few shows a year, the Center grew to an event being held almost every weekend. “It was primarily four shows a year,” Fann explained. “We tried to build a really solid season ticket base at that point and probably ran 70 to 80 percent capacity in those days. We added a series of other self produced plays, for the Art Center Trust, and concerts so the two things went side by side.

Once the two organizations merged, we kept that and expanded, so now we have a concert series, we still have the stage door series, and we’ve added another series of shows on top of that. We’re basically doing something once a month now with a show pretty much every weekend.”

Fann says that after several expansions, today the 18,000 square foot Art Center serves around 40,000 people a year, including 12,000 students that attend student matinees. “We’ve worked really hard to expand the experience of just coming to the building outside of the show. I think the museum does that. Every time you come back, we want you to discover something new.”

The Art Center’s Cannon Cultural Museum is made up of three parts. One, the Robert Mason Historical Museum, focuses on Cannon County history, while another section focuses on a unique tradition of the area, the Caldwell Basket Collection. “The Caldwells collected Cannon County baskets for years,” Fann said. “As they downsized, they donated those baskets to us because they felt they needed to be in Cannon County.”

Fann says another part of the museum is the Self-Taught Art Collection, which was also donated by the Caldwells. “As we were negotiating for the basket collection, they said, ‘You know we have 700 pieces of folk art. Do you want any of that?’ So, now we have one of the largest collections of southern self-taught art in the United States.”

While the museum highlights the history and art of the region, the Art Center also hosts various exhibits throughout the year. “The exhibit we have up now is one of ‘homeless’ signs that were collected by a local gentleman when he was traveling around working in the fi lm industry all around the United States. He would buy the signs from the person and give them some cardboard and a Sharpie to make another sign. They’re really fascinating.”

“We also focus on local artists that theme with the show or, like we did last month, something that was themed with Mental Health Month. So, we had an artist that was schizophrenic that had committed suicide at 27, but his parents had collected all of his paintings. So, we had all those exhibited in the gallery.”

While the Art Center features several works of art and historical pieces, that doesn’t mean that you can’t walk away with your own piece of art. In addition to the White Oak Crafts Fair, which is held September 10 – 11 and is now in its 21st year, the Center features a gift shop where local crafters and artisans display their wares and offer them for sale. “Our crafts gallery or gift shop is our retail part of our organization,” Fann said. “We have artwork from local artists on consignment where people can come in and shop and buy. We also use it as a pointer. We have something we call the Crafts Directory that points people out to artist in their homes. So, if there’s something that you like, but it’s not exactly what you want, we’ll give you the artist’s name and number and you can go out to their place of business and purchase it directly.”

“We have jewelry, pottery, ironwork, woodwork, and just a little of everything. We’ve got some glasswork and fused glass, and some wonderful fused glass jewelry. The other thing that people find, I think it is because the cost of living is so low here, for the quality of the work, the price is super low. They’re all local artists, from a 30-mile radius, some that are developing a national reputation.”

Education is one of the most important aspects of the Art Center, and educational programs include the School Matinee Program that provides educational programming for over 10,000 students annually from a seven-county area. The program introduces students of all ages to what is many times their fi rst formal arts experience. Also the Summer Youth Conservatory Program is an ongoing summer program consisting of three multi-week sessions of intensive theatrical training for students ages 6-18.

Music is another area that the Art Center focuses on and their award winning music label, Spring Fed Records, has received national recognition. “It started in an offhand way,” Fann explained. “We had a barber who was a well-known and respected fiddler inside the music circles. His name was Billy Womack. If you went to the Smithville Fiddlers’ Jamboree, or to any of the fiddle contests around, people knew who Billy was. In 2001 we had just got a CD recorder and were going to transfer some of Billy’s recordings over to CD for future generations.”

Fann says the Center received a grant to fund the project and through circumstances ended up producing several CD’s, including the Grammy Award winning release, John Work III: Recording Black Culture. The label offers the old-time, bluegrass, gospel, and historical recordings, and has been featured in The New York Times, The Bangkok Post, and The Old-Time Herald. Today, the label has built a catalog of 25 titles, which have been reviewed by major national music publications.

While the Art Center has branched out over the years, the life’s blood of the organization has always been its stage productions. With an auditorium that now seats 225, Fann said that with the recent addition of an eatery at the Center, the weekend shows are a better deal than ever. “You can have dinner and a show now, and for around $20. A meat and two for seven or eight dollars, and our show tickets top out at $12. Concerts top out at $15. So, for one person you could easily come do dinner here, and do an event for under $30, which is a pretty amazing thing.”

Needless to say, whether your interests are with the performing arts, or old time music; whether it’s history or the distinctive crafts created in the area, the Arts Center of Cannon County has something for you. Stop by and see what the performers and artisans have to offer.

Directions – From Lebanon, Tennessee – Head east on I-40 E toward Exit 239A. Take exit 239A to merge onto TN-26 E/US-70 E/Sparta Pike toward Watertown. Continue to follow TN-26 E/US-70 E for 23 miles. Turn right onto Hwy. 53. When Hwy. 53 dead ends turn right on TN-1 W/US-70S W toward Summitt St. (TN-1W/US-70S W will turn into John Bragg Hwy.) The Arts Center is located approximately one mile west of town on Hwy. 70S on the right. It is a red metal building with a message center sign. For more information visit their web site at www.artscenterofcc.com.