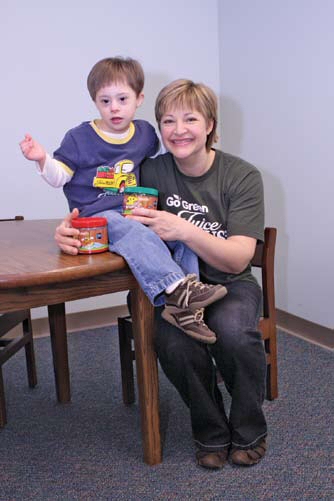 Spring is almost here and with that we all start thinking about getting healthier and in shape for summer. It’s hard, however, to break free of the winter doldrums and feel energized after being cooped up all winter.

Spring is almost here and with that we all start thinking about getting healthier and in shape for summer. It’s hard, however, to break free of the winter doldrums and feel energized after being cooped up all winter.

Three local entrepreneurs, however, are meeting the needs of those who live in the area by providing them with healthy alternatives to rejuvenate and re-energize themselves and their families.

Medical science reminds us almost everyday that good nutrition and good health go hand in hand, especially when it comes to the healthful benefits of eating fruits and vegetables. Unfortunately, despite the growing medical evidence, less than 25% of American adults eat the recommended daily servings of fruits and vegetables. Many healthcare professionals say that at least 75% of illness and disease can be avoided by getting the proper nutrition.

The results of eating poorly often leave us feeling tired, stressed and depleted. Eating right is all well and good but what happens when you simply don’t have time to prepare and eat three well-balanced meals for you and your family everyday. “Problem solved,” according to Sharon Price-Hobeiche. Sharon Price – Hobeiche is a local resident who has, herself, been run down and depleted with good reason.

Seven years ago, Sharon’s life was quite different than it is today. At the time she had been a 12-year veteran flight attendant with Delta Airlines, criss crossing the United States on a weekly basis. She was feeling run down and tired. A co-worker told her about a product called Juice Plus and within days of taking the natural supplement, Sharon was feeling energized. Little did she know five years later, she would be living back in her home-town of Lebanon with her son, Joesph, and would be a local distributor for the product she had grown to love so much.

Sharon is all about healthy living. She tries to eat all organic or natural products to keep her energy level high. She is a big believer in eating your fruits and vegetables! Ironically, Sharon’s grandfather was a long-time Lebanon resident by the name of Howard Rodgers who was in the produce business. Howard Rodgers, along with his brothers, started and owned the first super market in Lebanon right off the square. After retiring from the grocery business he went on to continue his love of gardening and would often be found selling locally grown fruits and vegetables at the Farmer’s Market.

He would probably let out a chuckle today to see Sharon selling Juice Plus Products – which are made from fruits and vegetables. Sharon’s true devotion for the product, however, really came to fruition because of her son, Joesph. Sharon is a single mother to a special needs child. In the past, Joseph would suffer from frequent bouts of ear infections and pneumonia. After realizing the benefits of Juice Plus for herself, Sharon began breaking the capsules of Juice Plus and putting the ingredients in Joeseph’s food. Within weeks his health improved and he has not suffered from pneumonia in one and half years.

Sharon says “Juice plus is a whole food based supplement. It is basically a bunch of the healthiest (mostly organic) fruits and vegetables, juiced and carefully dried at low temperatures and then removing the sugar and salt. These nutritious juice powders are then put into capsules, chewables, gummies and powdered beverage mixes.”

After returning to Lebanon with her son, Sharon needed to find a job that allowed her time to be home with her son but also make a living for she and him. She turned to Juice Plus because she believed in the product and has a passion to educate others on 104 Babb Drive the power of all natural nutrition. She is now a local distributor.

She not only sells the products but often, with other local distributors, presents wellness presentations where she and others including medical professionals educate the public about the benefits of fruits and vegetables in a diet. Sharon said “it’s not just about selling a product, it’s also about my heartfelt belief that many of our ailments today are directly related to our eating habits. It just makes me feel good when I get the opportunity to share the information I have with others in the hopes that I can help improve their health one day.” Another two local residents who are also big believers in the product they sell are the team of brothers who own HotSpring Spas of Music City. Dennis and Kevin Croteau have been the owners and operators of the local establishment for over five years now. They hail from the north but Dennis moved down to Tennessee in the 1990’s to help his parents build “Pirates Plateau Golf Association, Adventure Golf, Go Karts and Bumper Boats” in the Fairfield area. In the off season he began to service spas and soon after decided he might be pretty good at selling them. Kevin moved to the area upon his retirement from the US Army.

Together they established HotSprings Spas of Music City in the Wilson County area. And both brothers extol the virtues of the spas and saunas they sell. They not only sell the products but use the products in their own homes on a daily basis.

Kevin says that “saunas provide an array of health benefits from relaxing muscles, flushing out toxins and inducing a deeper sleep.” The spas definitely help with aches and pains. Kevin, who is a military veteran, uses his daily to help relieve aches from past injuries and says he no longer has to see a chiropractor because of his use of the spa. No doubt, Dennis and Kevin believe in their products. Both men believe staying fit, eating right and using as many alternative methods for staying healthy is important. “Sure, you could take aspirin to relieve pain” says Kevin, “but before you pop another pill you should try something that is natural, without side-effects, and see if that works just as well.”

In addition to the physical health benefits they provide, there is something to be said about the mental health benefits of relaxing each evening in a spa. According to Dennis, “in the rush of today’s society, taking thirty minutes to quiet your mind and relax is priceless. Better yet, being able to spend that time with family enjoying that togetherness really does have proven health benefits.”

For more information about Sharon’s healthy lifestyle, the products she markets and local Wellness Events visit www.pricelessjuiceplus.com or call her at 818-6598. For more information about the benefits of saunas and spas make sure and visit Dennis and Kevin at HotSpring Spas Of Music City at 1429 West Main Street, Lebanon in the K-Mart Shopping Center or at http://www.hssofmusiccity.com/