Founded in 2017 by husband and wife team, Cole and Erika Ebel, Ebel’s Tavern has become the centerpiece of the Carthage downtown square. And that seems only fitting since Ebel’s Tavern is located in a century-old building
made of solid brick and stone, right in the heart of town. 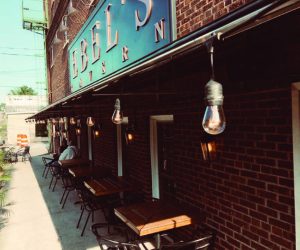 When Cole and Erika first moved to Smith county in 2012, they were not necessarily interested in starting up a new restaurant. Instead, they were looking for a simpler life, having each served in the military, air force for Erika, and army for Cole. They loved the hometown feel of Smith county and thought it was the perfect place to raise their three children. Upon moving to town, they soon became involved in various community groups and events and
realized that there were not that many places to socialize.

And the idea of Ebel’s Tavern was born.

“We wanted to incorporate a family-friendly, classy atmosphere where community could come together, eat good food, drink well-made drinks and have fun,” notes Cole. During a downtown event in 2016, the Ebels noticed
that the historic building was for sale and just for fun, called to ask about it. Next thing they knew, they made an offer and soon were the new owners.

One might think with no experience in the restaurant business, the Ebels would have been terrified of such a new business venture, but that isn’t their style. “We’ve both traveled the states and world and have enjoyed many
different cuisine styles and we wanted to bring some of those tastes closer for others to try,” continues Cole.

Ebel’s Tavern is a steak and seafood restaurant primarily. Specializing in everything from snapper, grouper, fresh oysters and scallops to calamari, shrimp platters and even lobster stuffed mushrooms, you definitely will find something you’ll love on their menu! They are also known for their delicious steaks that are all hand cut, upper 2/3 grass fed, grain finished and aged 21 days. While the grouper and scallops are local favorites, the oysters are extremely popular as well.

In addition to quality food, Ebel’s Tavern has become a place where the community can gather. The tavern has live music every Friday and Saturday night supporting local artists, a poker league every Wednesday night, family fun trivia on Tuesday night and a Thursday night dart league. And the Ebels continue to work towards filling up every night with an event that supports the community.

The success of Ebel’s Tavern, however, is definitely a group effort. While Cole and Erika certainly are very hands on, they are first to give credit to Janie Jones the General Manager of Ebel’s Tavern, as well as Chris Underwood, their Chef and Vince Vaughn, their Sous Chef. The Ebels are thankful for not only their hard work but also their loyalty especially during the last few months.

And while the restaurant is certainly near and dear to their hearts, the Ebels have not only enriched the town square with their new venture but stay  involved in other ways as well. Both are now involved with their local
government with Erika serving on the County Commission and Cole being part of the City Council. As active Libertarians, they are involved not only in government but also other groups that support their community including River City Ball, Smith County Living, Smith County Help Center, Keep Smith County Beautiful and are constantly on the Caney Fork River with a passion for keeping it clean and promoting river tourism.

To say they’ve embraced their new community is an understatement, but the best is yet to come. While expansion is certainly a possibility, for now the Ebels are content on concentrating their efforts on making Ebel’s Tavern the best it can be for the community they’ve come to love and call home.