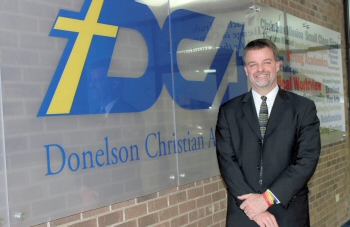 Tucked away on the outskirts of a quiet residential area, Donelson Christian Academy’s campus is alive with activity as lunchtime has ended and students prepare to attend afternoon classes. For more than four decades, DCA has been in the business of education by providing a rigorous curriculum within the framework of Christian beliefs while encouraging community involvement. DCA Headmaster, Keith Singer has been at the school’s helm for nearly three years and explains what makes DCA stand out, “We are a school that started with an intention of integrating faith and learning together. They go hand in hand here. We want our students to pursue lives of meaning and influence. By fostering a love for learning and strong moral foundation, they can get there.”

While the school boasts top of the line technology, dual enrollment options, an impressive roster

of educators, and steady enrollment growth, it doesn’t mean there haven’t been any bumps in the road. Like a lot of areas in Nashville, DCA’s campus endured severe damage during the historic Nashville Flood of 2010. Parts of the campus were under as much as 12 feet of water. Most all contents on the firstfloor were destroyed. Athletic fields, playgrounds, and parking lots were completely submerged. But they didn’t let those circumstances “dampen” the mood of DCA. “During the flood, hundreds of students, parents, and community members worked together to save several hundred thousand dollars’ worth of materials. During the months that followed, thousands of people helped DCA rebuild the school building into an incredible facility.” Singer says.

Through the efforts of many volunteers and donors, DCA’s campus is now fully restored with buildings that are essentially brand new. The flood appeared to be a great tragedy, but God had a greater plan. Like many throughout Middle Tennessee, the school has a freshnew vision for the future and the blessings of a facility to accomplish that mission.

Strolling through one of the school’s two student art galleries, Singer says including fine arts in the curriculum best fulfills the goal of producing top notch students.

Even though Singer is happy with the schools growth and future, that doesn’t mean there’s not a plan for expansion. “We have a master plan for adding on to the campus and there’s no definite start date but with the rapid growth we’ve experienced over the past two years, it may come sooner than we think.”

After leaving the visual arts classroom where students show off their state of the art 3-D copier, Singer wants to make sure potential students and parents understand that seeing is believing when it comes to the education offered at DCA. “We are not satisfied with only memorizing facts. We rigorously prepare students with foundational knowledge [grammar] and the tools of reasoning [logic] and persuasive writing and speaking [rhetoric]. We are dedicated to cultivating young people of character, intellect, humility and conviction, who are exceedingly well prepared to excel in college.

Over the Last Five Years: