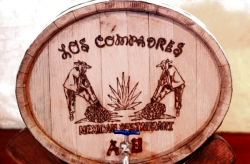 Almost every restaurant I’ve reviewed have been places a lot of my readers have never been to or even known about. This one is just a little bit different, because if you live and work in Wilson County, there is a very good chance that you know about Los Compadres. I have lived here in Lebanon my entire life, and it seems like Los Compadres has been here for most all of it, but in reality it is relatively new. Jose Gutierrez (along with his brother in law Victor DeLeon) opened his very first Mexican restaurant on West Main Street in Lebanon in 1991. And with the success and popularity of his first venture, he has never looked back and he has not slowed down. His latest restaurant opening (his 8th or 9th one…I lose count) is Los Compadres on south Cumberland in Lebanon at the site of the old Poderosa steakhouse.

And believe me, you would not believe that any other restaurant had previously been here with the beautiful remodeling job Jose and his team of architects and builders accomplished. As soon as you enter the door, you will see a very nice waiting area with comfortable seating and a large flat-screen TV to keep you (and the kids) entertained until your table is ready. And the wait should not be long because the restaurant boasts multiple large, open seating areas throughout. And the double-sided bar made from solid antique wood is one of the most beautiful you will ever see.

Jose was actually born in Los Angeles but moved to Mexico at a very early age. Jesus Maria Jalisco is the name of the town where Jose grew up. “Many

people from this region are restaurant owners and restaurant workers, and I guess this is what first got me interested in working in a restaurant, with the dream of someday owning one.” I think Jose has exceeded his dreams, working his way up from one of his first jobs as a busboy at a Mexican restaurant in Hopkinsville, Ky to NOW owning multiple Mexican eateries. I have been to almost all of Jose’s establishments, three of which are located on Nolensville Rd in Nashville(for years a hotbed of authentic Mexican restaurants). If you are ever near the Nashville Zoo, you should check out one of Jose’s other great restaurants. There is Los Arcos, Los Cazuelas, and my personal favorite La Terraza. I still miss Jose’s first La Terraza, located just around the corner from his original Los Compadres location. This was the site of many uber important “weekly meetings” with me and my fellow Fantasy Baseball players (our league aptly named “La Terraza”).