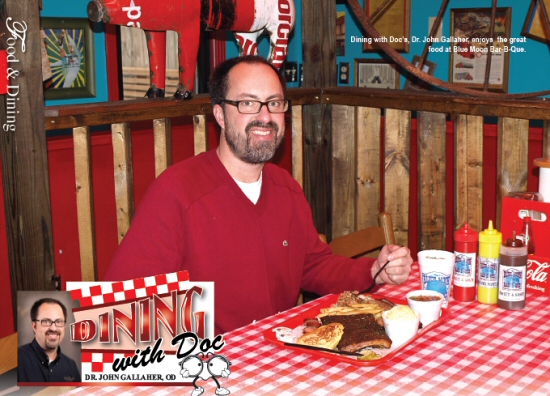 Always being on the lookout for great new places to satisfy my daily hunger pains (or is it pangs? I think I get BOTH!), I was excited when I saw the sign for Tom's Blue Moon Bar-B-Que. I knew this was going to be something different as soon as I stepped in the door (and different is usually good with me!). I felt as if I were back in Memphis, Tennessee, eating at one of the many great Bar-B-Que restaurants I frequented when I was in school there (oh, so many years ago). From the pink pig, to the red and white checkerboard table cloths, to the hubcaps on the ceiling, the decor is very apropos.

Owner, Tom Ferrell, spent the last 20+ years of his life studying and perfecting the art of good Bar-B-Que…and his efforts did not go to waste. Long before Tom and his wife Lisa were FINALLY talked into opening their first restaurant in Hendersonville by family, friends, and the multitude of fans of his fantastic fare (pardon the alliteration), Tom won numerous trophies and ribbons on the Bar-B-Que circuit, including some top finishes at the world famous Jack Daniel’s Invitational Championship.

We are fortunate that Tom and Lisa (a native of Lebanon), brought their great Bar-B-Que here to Wilson County. After a brief stop at the old SuperBurger location on North Cumberland (I'm sorry, I still miss that good hot-off-the-grill greasy burger from my youth), they are now located at 711 Park Avenue, home of the former tenant, Little Paul's. Tom said, “I really hated to see Lebanon lose Little Paul's. They had served Wilson County folks well for seven years. We do want to welcome all of his fans to come give our place a try.”

Besides some of the best pulled pork I have ever had, along with great ribs that are slow cooked 14 hours over hickory wood and topped with Tom's secret rub, Blue Moon Bar-B-Que has the most tender and juicy brisket that would rival that found in the Lone Star State. The smoked sausage will literally melt in your mouth. And fans of good, smoked wings (sans sauce similar to the ones Little Paul made famous) will not be disappointed. Some of the fresh sides include (among others) very tasty mac-n-cheese (a favorite of the kids), broccoli casserole, bar-b-que beans and the most tender turnip greens this side of Grandpa “Doc” Gallaher's. And if possible, save room for dessert because the homemade banana pudding is the perfect finish to a great meal here.

Tom's Blue Moon is open Tuesday through Saturday, serving breakfast, lunch and dinner. Not being an early riser myself, I have not tried the breakfast, which is served daily beginning at 4:30 a.m. And be sure to look for the $5.99 daily lunch specials. March 5th marks the first of some monthly live music on Saturday nights. Martin Family Circus is set to perform (fans of Marty Stuart would want to be in attendance for this). Just last night I visited Tom's Place (about my 10th visit so far). I decided to try the smoked 1/2 chicken that my buddy Rob Gwynne keeps raving about. I had just gotten in the already long serving line when Aaron announced from behind the counter, “We are fresh out of the chicken!” They have a sign posted with their motto that reads, “Because our meats are smoked fresh every night, yes, it's true, sometimes we do run out of one … but we'll do it all over again tomorrow.” Ah yes, an excuse to come back tomorrow!