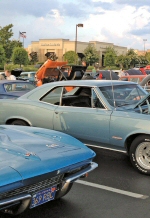 Is there any better combination than some good ole’ chicken and classic cars? They bring back memories of a different time. The

smells, the sights, the feel, all evoke memories of days gone by. For the past five years, every Saturday night from April to October, Chick-Fil-A has hosted the Mt. Juliet Cruise In, at the Mt. Juliet/Providence Chick-Fil-A parking lot from 5p.m. until 9:00 p.m. There you will not only find chicken and cars but also fellowship, that for many has existed for more than a decade.

The Cruise In attracts between 200 and 300 cars each week and of those, classic cars do dominate, but sometimes you can also see tractors, motorcycles, and even boats on display. As long as it can move, it can be displayed. It doesn’t matter if you’re young or old, man, woman, or child, there is something special about the classic car you connect to. Your classic car may be a 1929 Model T or 1957 Chevy, or a 1992 Ford Mustang. I personally have an affinity for a two door 1959 Cadillac with the rocket taillights.

The Mt. Juliet Cruise In is basically an adult version of show and tell. You can walk through the parking lot and get the opportunity to meet the owners. There are people who don’t even have cars who simply bring their lawn chairs to sit around and reminisce about bygone eras.

To that end, the Cruise In has become a family affair. On the particular night I attended, my parents, my wife and my two children accompanied me. As we strolled around the parking lot, my father shared with my son the makes and models of the cars of his youth. A couple of the car owners even allowed my children to sit in the drivers seat and pretend to be cruising down the highway. Even a brief rain shower could not put a damper on the evening. It simply gave us a great excuse to treat my family to a Chick-Fil-A sandwich and some of their famous homemade lemonade.

display. The Deejays, Dennis and Donna Pirtle, spin classic tunes continuously for 4 hours straight. Every thirty minutes door prizes are awarded that include Chick-Fil-A milkshakes and ice cream. There is a weekly raffle for gift certificates from local businesses. Games include trivia and “name that tune” contests. Children compete to see who can Hula Hoop the longest. It’s good clean fun, the way it used to be.

Although Chick Fil-A is the primary sponsor, several other businesses play important roles in the Cruise In. Two Rivers Ford, Auto Zone, and O’Reily’s provide gift certificates for the door prizes and American Jewelry, Kroger and Panera Bread allow use of their parking lots each Saturday night.

In. Ray Daniel has owned the Chick-Fil-A Providence franchise since the doors were first opened. Ray notes that the Cruise In “is like hanging out with a group of your friends every week.” Not only is Ray the owner/general manager, occasionally he will bring his own classic car to display. He currently is the proud owner of 1992 Chevrolet Corvette S5.

Bill McCall and his wife, Bobbi have been hosting the Cruise In for the past 15 years. The first 10 years the event was held at the Mt. Juliet Sonic location. However, the event was so successful it simply outgrew the space and Bill then asked Ray if they could move it to his location. Over the years Bill has developed so many great friendships as a result of the Cruise In. “In the winter people will come up to me to tell him how much they look forward to the spring when the Cruise In begins,” beams Bill. This particular night, Bill was displaying one of his favorite classic cars, a 1972 Chevy Chevelle. “Interacting with the people is my favorite part of all of this,” notes Bill. It is a family affair for the McCall’s, who on any given Saturday night can have up to nine grandchildren attend the Cruise In.

And that’s what the Cruise In is all about – good food, fabulous cars, friends and family. Just like it used to be and still can be.