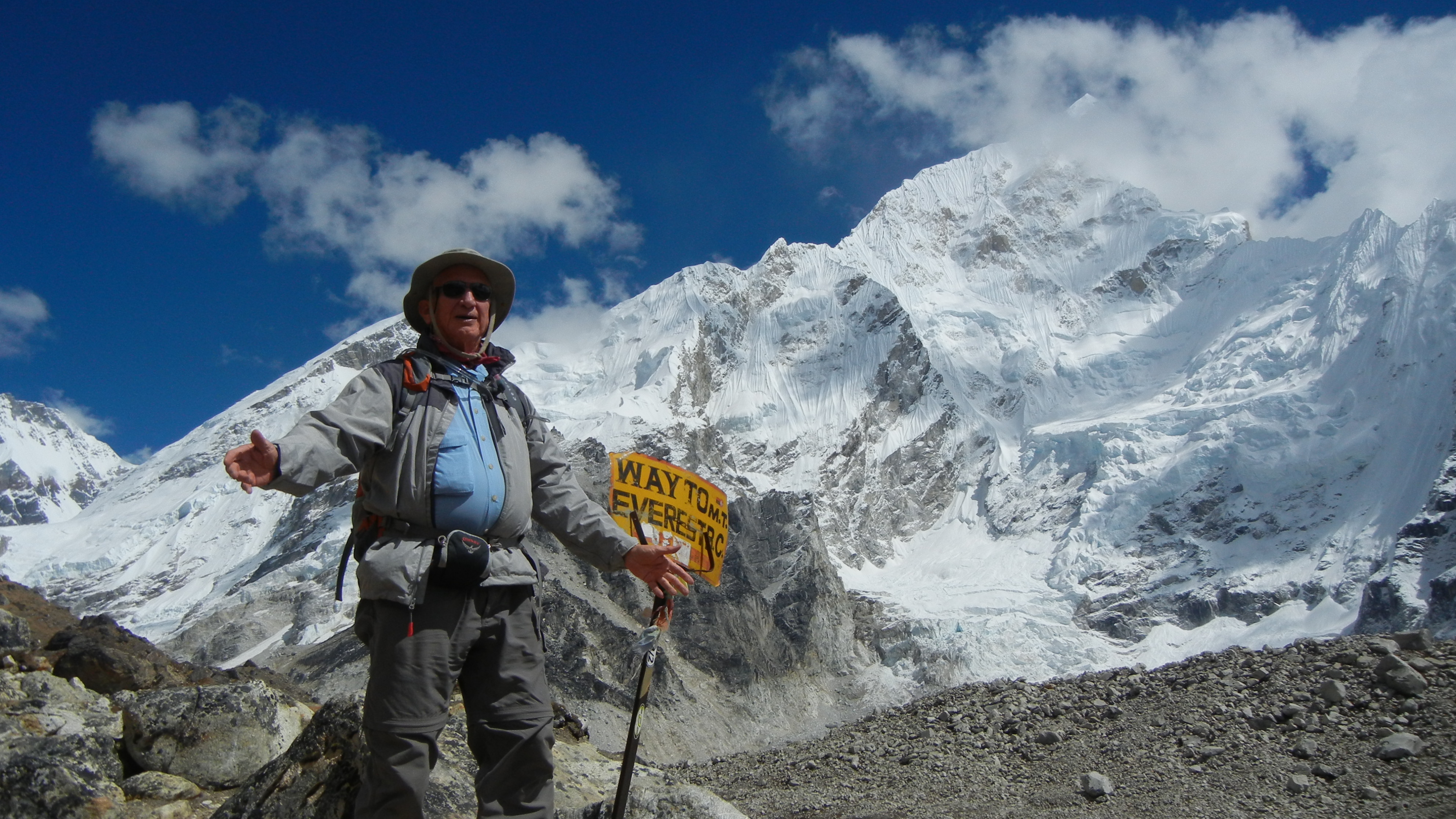 A Motley Crew and a Monumental Adventure

What do you get when you combine two car salesmen, a veterinarian, an investment counselor, the chairman of a bank, an art gallery owner, an accountant, a school superintendent, a trauma surgeon, and a priest?  One would think that it would be the start to the perfect joke with an epic punch line. Although a good laugh is likely mixed in there somewhere, this motley list is actually the perfect combination of people to create lifelong memories with on a trek up the Himalayan mountain range to Everest base camp.

When W.P. Bone of Wilson County Motors heard of a friend’s mountain climbing adventure, he “got the fever” to climb as well. Even though he had been a mountaineer of sorts when younger, it had been several years since his last adventure.  After calling his son and partner at the dealership, Mitchel, W.P. quickly received a hearty “I’m in!” even before he relayed any true details or dates. Before they knew what they had fully committed to, the father and son were collecting friends, acquaintances, and even a few strangers to create a team of climbers for their Nepalese adventure.

Mitchel took on the role of primary planner for the trip, along with two other Wilson County Residents: Steve Shirley, a local veterinarian with Kinslow Veterinary Clinic, and Tom Ferraro, an esteemed Investment Advisor at Wells Fargo. Together, they all invited friends, purchased gear, planned flights, and prepared for the adventure of a lifetime.

At the close of September 2014, the team gathered in Nepal to begin their three-week trip. In order to avoid altitude sickness, a very dangerous reality for many climbers, everyone spent two days acclimating to the mountain air before making an attempt to move upward.  Each person on the trek could bring along only 33 pounds of personal items and supplies, which at first sounds like a small amount, but as the weight is carried up thousands of feet in elevation, the burden of the gear increases significantly. “You became very cognizant of that weight” Mitchel notes, so every item carried needed to be efficient and purposeful.

Once the acclimation phase passed, through the lead of their primary Nepalese guide, an experienced mountain trekker by the name of Suman Koju, the group began their ascent to Everest Base Camp. Each morning began with Suman waking the group with the words “Zoom! Zoom!” just as the sun began to rise. Steve recalls that after Suman’s wake-up, “We got our stuff together and just started walking” and continued walking all day long. With a distance of approximately 87 miles and nearly 30,000 feet in a collective meandering elevation increase, one foot in front of the other from sun-up to sun-down was a must.

Each day’s hiking mileage was very purposeful and necessary. It was essential that the group managed to make it to the next mountain town or the next teahouse in order to reach safety for the night’s rest. Many of the Himalayan families depend on the income they earn from caring and providing for mountain travelers, so the climbers were always welcomed guests.  At one particular rest point, the group arrived at dusk, making the scenery of the town and the guest rooms hidden by the lack of light. The next morning, “Zoom! Zoom!” was called and the group began to rise. Tom described the groggy morning visual of his less than stellar abode. Surrounded by uncomfortable and dirty provisions, he opened the shutters of the small window within his room to observe a remarkable and breathtaking view of the mountain range, a scene that was masked in shadows the night before. The spectacular view of the mountains and the surrounding atmosphere was simply unforgettable.

Along the journey, according to W.P., there were certainly some moments where everyone doubted his or her endurance. The further they progressed, once above the tree lines, Steve notes that the footpath became even more treacherous, consisting of only slippery and bare rock. At one point, a few individuals from the group trekked slightly further to the top of Kalapathar at Everest Base Camp, at an altitude of 18,250 feet. “It was at that point you could truly appreciate the difficulty of the altitude,” Steve recalls. It was only 100 yards or so father than the rest of the group hiked, but it took 30 to 40 minutes to complete the distance.

Once at Everest Base Camp, the group realized that with the great challenge of their trek was a great visual reward of extraordinary beauty, as well as a personal satisfaction of having progressed so far. The ambiance of clouds swirling around and below was monumental. This was the moment they all had worked for in the journey. As Tom recalls, everyone was “humbled by the awesomeness” of the surroundings.

On the day of reaching their climbing destination, W.P. welcomed in his 74th birthday at 17,400 feet in elevation. The instigator of this whole journey, and the oldest person on the trip, he brought in his next year of life doing just what he had hoped to do in 2014.

WP’s son, Mitchel, knowing his father would celebrate his birth “in the shadow of Mount Everest” wanted to have a cake made in order to solidify the day as nothing less than remarkable. After arriving at their sleeping spot that night, Mitchell began questioning the mountain caretakers on where the cake was for his father.  The local, with no hesitation, pointed in the other direction towards a formidable mountain range and said, “It is just over that mountain, and I will be back in twenty minutes.” Sure enough, in complete darkness, twenty minutes later, the cake arrived as promised, and it was perfect for the celebration.

With more early morning risings of “Zoom! Zoom!” from Suman, the group made steady progress and kept a successful pace towards where they began, drawing the trip to a close.

Upon reflection, the group wouldn’t have changed a thing about their adventure. Anything “bad” that might have happened was embraced. “The bad is what made it a trip,” Tom said. As W.P. nostalgically  proclaimed, “Everybody got along. We had perfect weather. We all came back in one piece. We just had a wonderful trip and couldn’t ask for better companions.”

It’s predicted that W.P.’s “itch” may come back, and the assortment of friends may journey again. Until that time, they all go about their business with an amazing sense of accomplishment, a lifetime worth of memories, and a computer full of digital images. Everest, should they choose to accept her challenge again, will always be waiting.