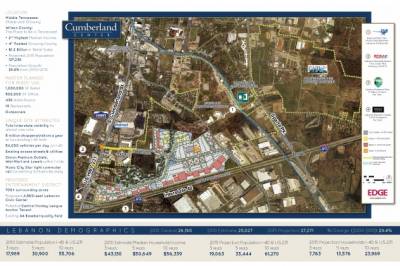 My husband has a slew of what is known as Hippisms, which are short little phrases that capture the essence of something. One of my favorites is his “The Six Ps: Proper Planning Prevents Piss-Poor Performance,” and it’s something that I think all government officials and departments should post in their offices.

In my humble opinion, there are two stark examples in Wilson County of where that did not happen and where it did happen.

The development of the 376-acre area between Highway 231 and Cainsville Road is being overseen by Nashville’s Vastland Realty Group. If, and when, it is completed, it would boast providing additional retail shopping and dining alternatives, including one of each which are up and running now, RCC Western Store and Logan’s Roadhouse. To be rolled out in stages, the plan calls for the phase one to include a one million square foot retail center, as well as 500,000 square feet of office space. Phase two would include an entertainment district to the east, which would be home to a community events center, which will house a hockey arena.

Estimated at today’s prices to cost $40 million, the center would have between 4,500 to 6,200 seats and hold two sheets of ice, with the hopes of attracting a Central Hockey League team to be a feeder for the Nashville Predators. The center would include also 12,000 to 15,000 square feet of meeting halls and the possibility of a hotel next to the center. To pay for the entertainment center, property and sales tax generated from current and future businesses and office development within the designated area would be put in a savings account to be overseen by an appointed, not elected, Entertainment District Authority.

But before phase two can even hope to be implemented, two thirds of the both the Lebanon City Council and Wilson County Commission must approve it. Then the Tennessee General Assembly must approve changes to seven current laws, each of which would create exceptions for Lebanon.

You may be saying to yourself right now, “Hey, the concept is great, because it could possibly generate a boom in growth for Lebanon like Providence has done in Mt. Juliet.”

Whoa, Nelly. Hang on a minute.

There’s a problem. The Six Ps were not implemented. There was no prior planning to prevent piss-poor performance. Before the announcement in October 2011, not a single feasibility study had been conducted. None. And if any have been done since then, they haven’t been shared with the public. We have no way of knowing if this concept will be supported by retailers, business people, or even hockey lovers, and that is a mistake.

Meanwhile, over at the Wilson County Commission, the idea of an Expo Center at the James E. Ward Agricultural Center emerged. Earlier this year, the idea seemed to be on a fast track to seek the needed approval of the General Assembly as well. But, the brakes were just as quickly applied, and rightly so.

The County Commission voted instead to have a feasibility study done to see if there are enough conventions and events out there that could sustain such a center. The last thing our county coffers’ need is a drain on a project that can’t pay for itself. They applied The Six Ps, and for that I applaud them. It’s better sometimes to slow down and make sure you have all of the information possible before moving ahead. The County Commission realized that, and for that, we should all be grateful.

Before the General Assembly reconvenes on Jan. 14, 2014, my wish is that Vastland will conduct it’s own feasibility study of The Cumberland Center. Being in the development business, this concept cannot be alien to them. Surely, they’ve done similar studies before developing other properties.

The last thing we need in Lebanon is for our city leaders to march to Nashville to seek seven exceptions to current laws and not have such a study in hand. It would be embarrassing for the city, especially if county leaders headed down there and sought approval with facts and figures to back up their proposal.

Better yet, I think what is needed is for the city and county to sit down, study both feasibility studies (provided one is done for The Cumberland Center), and see if there is a combined project that would benefit all concerned here locally before heading to Nashville.

Having the county and city in lock-step before going to our legislators would give us a better chance of having a convention/expo/entertainment center of some type in Lebanon, than the two entities seeking separate approval of their respective projects.

If I’ve learned anything about covering the General Assembly the past two years, it’s that they will ask a lot of questions about how the two projects would benefit or compete with each other. So, if our local leaders expect to get a favorable nod, then they better have applied The Six Ps.

Amelia Morrison Hipps is a local political consultant and freelance writer covering the Tennessee General Assembly for TNReport.com. She may be reached at (615) 442-8667 or via email at amhipps@downhomepolitics.com. Follow her on Twitter @DwnHomePolitics, like her Facebook page at http://www.facebook.com/DownHomePolitics and for her more personal views on politics in today’s world, visit her website at DownHomePolitics.com.

THE VIEWS AND OPINIONS EXPRESSED IN DOWN HOME POLITICS ARE THOSE OF THE AUTHOR AND DO NOT IMPLY ENDORSEMENT BY WILSON LIVING MAGAZINE. WLM, HOWEVER, ENCOURAGES A DIVERSITY OF OPINIONS OF TOPICS OF IMPORTANCE TO OUR COMMUNITY. IF YOU WOULD LIKE TO SUBMIT AN OPINION ON THIS ISSUE, PLEASE CONTACT US AT INFO@WILSONLIVINGMAGAZINE.COM.