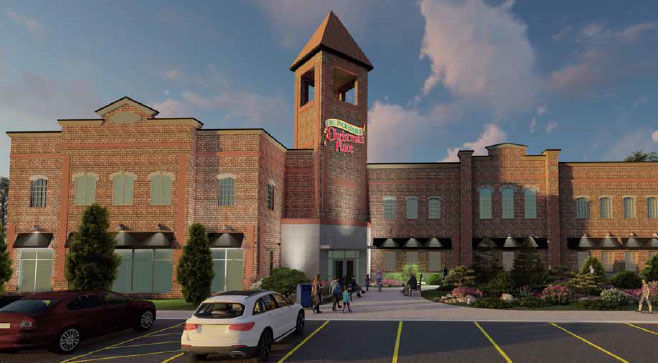 A long-kept secret was finally revealed late summer when Judd Sellars announced Christmas Place was to be constructed on three acres in the planned Sellars Station development on North Mt Juliet Road.

At the groundbreaking, Santa Claus made his grand entrance with a “ho ho ho” atop a Mt. Juliet fire engine with nearly 100 well-wishers there to welcome Christmas Place owners Toby and Karen Barnes, along with co-owners daughter, Kristin, and son-in-law, Mark Jackson.
Projected opening is summer 2020, just in time to lead into the holiday season. 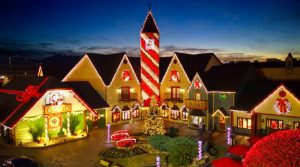 It’s a $3 million investment that will make Mt. Juliet a destination place and sister store to the south’s largest Christmas store, The Incredible Christmas Place, owned by the same family, already open at the foothills of the Smoky Mountains in Pigeon Forge, Tenn.

“We are so honored to be here in Mt. Juliet,” Barnes said at the groundbreaking. “We feel so lucky to be embraced and now Mt. Juliet and all around here can celebrate Christmas 365 days a year.”
Barnes is semi-retired now and Kristen is CEO of the company. And while this 12,000-square-foot centerpiece will highlight Mt. Juliet for years to come, the original The Incredible Christmas Place had 12 million visitors in just one week this past summer.
“They came to us,” said Sellars. “It was between Mt. Juliet and Brentwood. I know Mt. Juliet will embrace the Christmas theme and we are so family-oriented. They saw my Sellars Park (built in 2014) development and loved the old-world-looking brick. They want to replicate that for their store.”
The site plan calls for five lanes for tourist buses and about 65 parking places.

Kristen said part of the footprint will be a four-story bell tower that can play holiday music year-round.
Actual work on the project began in November.
“The project is going fantastic,” Kristen told Wilson Living. “We are finalizing all the plans and should begin construction in the next couple of weeks. We are so excited to see the ground move.”
Kristen said they are in full swing of this Christmas season in Pigeon Forge.
“We have already begun buying, planning and constructing displays for the new store,” she added. “We have an amazing product selection and themes planned and cannot wait to unveil it next year.”
Spokesperson for the Christmas Place, Chad Nether-land, told Wilson Living the store planned for Mt. Juliet will be a smaller version than the massive store in Pigeon Forge (at 40,000 square feet and in its 34th year).
“But in itself, it [Mt. Juliet store] will be a regional draw as well,” he said. “It’s such a cute town and a great paring withdraws from Metro Nashville and way be-yond.”
Netherland said it’s so important to note the two Christmas stores are family owned and operated.
“Mt. Juliet is near and dear to their hearts,” he noted.
“This Mt. Juliet store may not have as much as the one in Pigeon Forge, but it will still have the same variety of Christmas trees, ornaments and all things Christmas from head to toe. All the best of the best. One hundred percent Christmas.”
And while they will include seasonal nods, the focus is the merriment of the Christmas season.
What’s unique to the Christmas Place is they have design teams on hand to customize wreaths, garlands and anything one can imagine. And they ship everywhere.
“I guess the takeaway is that everyone loves Christ-mas and our store is not like your typical home-goods type store,” Netherland said. “It’s unique and is an ‘experience’ and people wander through and pick up great themes and ideas to replicate at their homes. We create one of a kind displays and rooms and layouts.”
To say it’s elaborate would be an understatement. The bell tower at Pigeon Forge and planned for Mt. Juliet’s store, is designed after a German village.
“We will bring a little of that to Mt. Juliet,” said Netherland.
Additionally, there are future projects for Mt. Juliet, Sellars revealed.
In Pigeon Forge, there’s an Inn at Christmas Place. And, more land is acquired by Sellars, so you never know! Other endeavors are in the works.