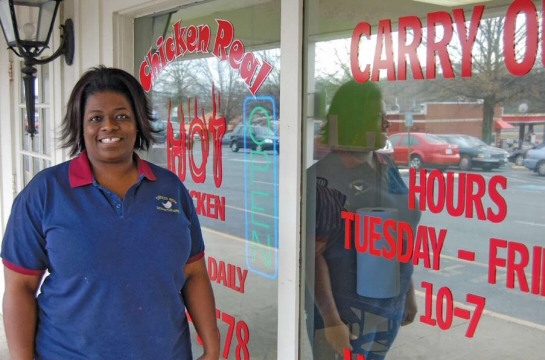 From her small eatery, which is mostly carry-out, in Mt. Juliet’s Shiloh Plaza on Lebanon Road, she is within a rooster’s crow of Davidson County.

For the past seven years she has been serving some of the most delicious chicken this side of the Mason-Dixon Line. The degrees of the hot bird range from Mild to Hot to Suicide depending on the amount of dry rub Butler applies to the meat. However, a few hardy souls take it one step further to the level of an inferno they describe as Insane.

“The few that are brave enough to go hotter than Suicide get Insane. It was named by the guys at Extra Point (a Mt. Juliet sporting goods store) who tried it and said, ‘These wings are Insane,’” Butler says with a smile as wide as the Cumberland River while she refers to that tasty four-alarm fire caused when her poultry in motion goes from the eater’s hand into the mouth.

“My customers say it’s the best fried chicken they’ve ever eaten. It’s flavored to the bone, not just to the skin. When we do our spicy chicken, we dry rub on the meat, the batter and deep fry it,” she said.

Vaun Reynolds, a regular, has chowed down here three to four times a week since the Butlers relocated here in 2007. “I’m a chicken eater. I will eat it any way: baked, boiled, fried. And I like spicy. There is nowhere around here that I can get spicy,” he said as he attacked his 4 p.m. supper.

Brad Jackson, not quite the chicken addict as Reynolds, satisfies his poultry urges once a week on Butler’s chicken strips. “The chicken is the best around, real juicy, not overcooked. It’s perfect,” he says.

Country music star John Anderson left his restaurant review on an autographed glossy photo on the wall that reads, “Thanks for the great chicken.”

Another country star’s mug and autograph also beams from above the cash register, a token of appreciation from some of Kenny Chesney’s roadies who graze here weekly. It seems Chesney sticks with a more healthy diet. (Hint: Kenny, this would not be a bad place to fall off the wagon.).

Butler’s business is not big on show. The proof is in the pudding, uh, in the chicken. There are three small tables with chairs for six in the customer service area where the walls are painted a bright, happy lime color. When the weather’s
nice, the tables and chairs go out the door and onto the sidewalk.

Butler is Mt. Juliet born and bred, a proud graduate of the class of 1988. She learned how to cook from her grandmother, Mary Jane Humes, and mother, Marie Reynolds. “I was the only girl with three brothers. I had no choice,” she said. “In school I was always involved in 4-H (her specialty was cornbread). I began cooking at 7 or 8 and began frying chicken when I was 13 or 14.” After high school she worked as certified nurse technician at McKendree Village for six years and then tried her hand as a beautician for seven years.

She and her husband, Thomas, an inspector for West Wilson Utilities, have been together for 18 years. They are comfortably settled in their third roost on Lebanon Road as they have gradually moved west, other than one year in Lebanon at the old Allen’s Grocery site.

“I’ve had customers who followed me from one end of Lebanon Road to the other,” Tasha says of the business that originated in the frying pans of Bob and Linda Neal in 1982. (The Neals later sold it to Larry and Tobi Freeman, so that when the Butlers purchased the eatery in September 2001, they were the third Mt. Juliet couple to own Chicken Real.)

Tasha’s four-day-a-week gig is as much a labor of love as it is a business. She goes from 7 to 7 here Tuesday through Friday, none of that 9 to 5 laziness for her. She also caters weddings, church suppers, funerals, baby showers and office parties. Butler says chicken strips are her best sellers, but the hot wings, hot chicken and fried cauliflower are not far behind. She will not divulge her patented secret recipe (“I guard that with tender, loving care”) but does share there are 15 ingredients in her batter.

She will reveal the steps in cooking her chicken: Rinse, batter, put in cage, pressure fry (in zero trans-fat grease, a vegetable oil) for 15 minutes. Once chicken fanciers sink their fangs through the flaky, brown crust, the taste buds wake up in overdrive. It’s definitely a two-napkin dinner, and sweet ice tea helps fills the bill and douse the flames.

“The recipes are all in my head. All of my seasonings I measure with my hand,” said Butler. “I love cooking. When I get bored, I cook different things: chili, chicken and dumplings, pork chops, fried taters. I cater to my customers. Whatever they want is what I’m gonna try. Some days the special may be liver and onions, the next day may be cheeseburgers.”