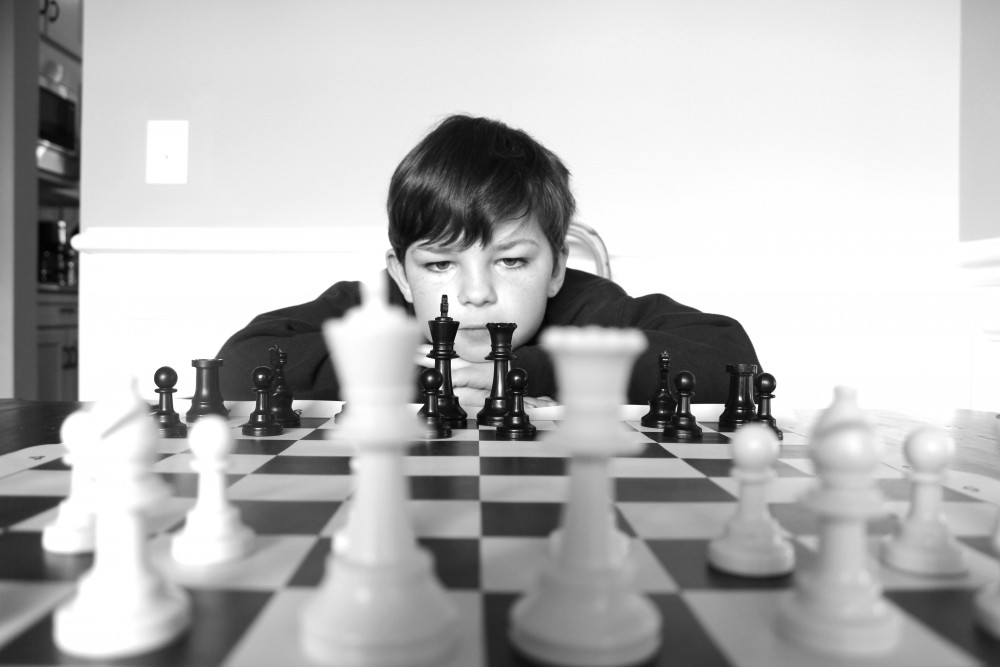 In most respects 10-year-old Max Williams appears to be a pretty typical fourth-grader.

He likes playing the video game Sins of the Solar Empire, romping in the yard with his pet Yorkie Coco and watching the dinosaur flick Jurassic Park over and over. He enjoys reading and archery and roots for the Denver Broncos and laughs at the antics of the TV family The Goldbergs.

But sit this 4-foot-3-inch, 55-pound youth in a chair in front of game board holding 16 black and 16 white small playing pieces that bear the names pawn, castle, bishop, queen and king, and Max transforms into a silent, intense warrior, a merciless soldier who takes no prisoners.

The chess enthusiast, who lives in Lebanon with his parents Les and Traci Williams, finished 30th in the United States Chess Federation National Elementary (K-6) Championship two years ago. He has competed in about 50 contests since he was 6, earning two first-place finishes and collecting more than two dozen trophies.

These days he plays at a higher level that includes fourth, fifth and sixth graders and at a recent tournament won three of five matches, most of them versus sixth-graders.

“I thought it was cool to destroy them in a chess game. They think I’m an easy win sometimes because I’m smaller and not as old as them,” Max says of sixth-graders.

Just before a match begins, Max makes his initial move: a good, old-fashioned psych-out ploy that he refers to as the “stare down.”

“I just look at the board and it freaks ’em out,” he notes. “My dad told me not to goof off with the other kids before the matches started and lose my focus, so I started staring at the board. I’m thinking I’m just about to go to war and planning my attack, strategy in my head.”

Max began playing chess at 2 with his father as his mentor.

“It’s a game of two armies fighting it out, so what little boy wouldn’t want to play,” said Les. “I played frequently against the computer and realized it was a game Max and I could play together that he would never outgrow. I began to teach him the names of the pieces. With the aid of the board game No-Stress Chess, he learned how they moved and then incorporated strategy for game play.

“He had a very early comprehension for pattern recognition, which is a key part of chess,” said Les, who let his son enter his first tournament at 6.

“He was more than ready to compete by then—he was taking lessons and ready to put his new skills to the test.”

“I kind of pushed it a little but never thought of tournaments. In kindergarten, we didn’t know there were clubs and scholarships,” said Traci.

“I think it’s easier to get a scholarship through chess than sports like basketball and football,” said Les. “It was definitely an incentive to encourage his continued involvement in chess. It’s exciting to think young players have an opportunity to win scholarships as early as their freshman year of high school.”

“I just like having fun,” Max reports. “You can have fun and get a good education at the same time. I’m better at math, from learning to calculate in my head, and I met one of my best friends at a chess tournament. He moved to Colorado, but we still FaceTime a lot.”

As for his goals as a player, he says, “One, I want to get better at chess. Two, I want to make it more popular. I don’t think many people play it any more like they used to. Not as many people know how to play because there are other things to do like video games, bowling and TV.”

“We reached out to a coach when Max outgrew Les’ ability to teach him,” said Traci. “He would still benefit from a coach, but we have found other means to train for the time being.”

One of those avenues is the web site Chess.com, a large, community-based online gaming platform for chess, with users from all over the world at every skill level—from someone just starting to learn pieces to grand master level.

“We’ll initiate a game online with some random player, and then they’ll make a move, and I’ll move their man, and Max plays against me,” said Les, who has a chessboard set up on the table for this match. “He’s a visual player. He could play himself on iPad but it’s better for him to see the board.”

Max, who hopes to become a genetic scientist one day, describes his style of play as being “very tactical. I’m an offensive player, not defensive.”

Since the first grade, Max has been a member of the Donelson Christian Academy chess club, which meets every Wednesday after school. Members range from first-graders to high-schoolers but the majority are upper-elementary age.

“Max started playing very young. If you are exposed before the age of 5, they’re capable of advanced problem-solving at a much earlier age, and research shows advancement in regular curriculum areas such as math and reading as well,” said Tiffany Andrews Elliott, the early childhood chess instructor, who mentors the club and also teaches chess at Napier Enhanced Option School, Julia Green Elementary, Granbery Elementary, Ensworth and University School of Nashville.

“Early exposure was the key for Max, and he was passionate enough to study. He is an exceptional chess player for one so young.”

“Chess opens the parts of the brain that most people don’t use every day. I get to see a much deeper side of kids, much more intellectual,” said the instructor.

“I really love my job. I teach at six schools, five to six days a week. Kids are very happy to be in a club where, no matter who they are, they are accepted. It’s such a rich culture. It’s challenging as well so I don’t get beat by kids like Max,” she noted with a smile.

Elliott said that her organization teaches chess in about 25 Nashville area schools and estimates there are probably dozens more run by private coaches and other individuals.

“Valor Collegiate [Academy] in Nashville is in its first year, and every student is in the chess club. We’re coming up in the world, I think. I personally think all schools should offer chess club to their students,” she said.

One of Max’s school chums who joined the chess club this year is fourth-grader Alexandria Trubee, 10, who lives in Nashville.

“My friend Max and my dad inspired me to join,” said Trubee, who plays for fun but likes the fact that “you have to concentrate and it helps me concentrate in other subjects.”

She describes Max’s game as “brilliant” and that it takes him about a minute to checkmate her.

Second-grader Cam’ron Stuart, 8, says, “Chess is one of my favorite games in the world. I love playing chess with people.”

Ranked fifth in the club, Stuart’s goal is to move up the chess ladder into first place. He says of teammate Max, “He’s a really hard chess player.”

In describing the atmosphere during a big chess tournament, Max says, “It’s loud but very stressful. We’re in a big auditorium with rows and rows of tables full of chess boards. There are lots of parents hanging around until the chess match begins and then it gets really quiet when everyone starts to play and think.”

Mom Traci describes her own emotions while her son is competing in a major tournament like the nationals, saying, “I’m usually quite anxious, anticipating his emergence from the tournament hall. Did he get a snack before he went in?  Will we be celebrating his win or soothing wounds and prepping to do better the next round?”

His parents say that when Max is in training things can be “pretty intense” and it requires about 45 minutes of his time at home every night. Thus, this school year has been kind of a breather for him and he has not entered many tournaments.

“He was exhibiting signs of burnout, so we decided to pull back a bit. The last thing we want is for him to lose his love for the game,” said Traci. “In addition, he is getting to an age where his social life is beginning to take shape and chess is a big commitment that sometimes has to take precedent over social events.

“He has missed birthday parties, school activities and opportunities for outings with friends. It’s definitely becoming more of a balancing act as he gets older and becomes more social.”

While mom and dad hope that Max will continue to strive to better his game and rating and maybe one day achieve the level of chess master, they see bigger benefits.

“There is always someone who can beat you, so you learn to be a gracious loser,” said Les.

“Chess is a game of consequences: preparation and planning of the right moves will yield positive outcomes, which translates to real life.”

On a recent evening Max and his Les engage in a game of chess, and Max disposes of his father in a matter of a few minutes. Afterward they shake hands across the board.

When queried if he shakes hands with every opponent after a match, the youngster responds, “Yes, before and after. Always.”

Asked if he might choose to play baseball or some other sport in a few more years, he answers, “I doubt it. I say chess is my sport.”

Where to find chess mates?

For details about the Nashville Chess Center and the Tennessee Chess Association, go online to