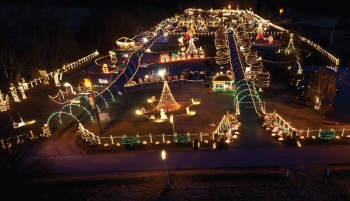 The Holiday season is filled with many family traditions. Every year our family has a tradition that consist of cramming as many people as legally possible into our SUV and heading out to 791 East Old La-Guardo Road off of Highway 109. There you will find Chad’s Winter Wonderland. People travel for miles around to see a light display that would make Santa Claus himself envious.

For the past thirty-one years Chad Barnard of Wilson County has been creating a light display like no other. Cars are able to cruise around Chad’s lighted holiday paradise.

This years Chad’s Winter Wonderland will include over two million lights, 350 pieces of scenery, 90 lighted arches, and even Chad’s ski boat is lit up.

Chad begins his display every year on Thanksgiving night and runs through New Years Eve. Every weeknight beginning at 5:00 pm to 10:00 pm Chad’s lights are on display. On weekend nights Chad stays open to 11:00 pm. For $10 a carload, a family is treated to over eightacres of Holiday scenery. From Frosty to Rudolph to Santa, Chad leaves no holiday tradition to imagination. Chad tries to add something new every single year. This year’s new edition will be a display honoring the Twelve Days of Christmas.

I have known Chad for many years, both Chad and I attended Mt. Juliet High School together. He currently owns

Barnard’s Appliance Service. Chad’s father, Eddie Barnard started the business in the late 1970’s servicing every type of appliance imaginable. My parents like most people in our area depended on Chad’s father to repair our appliances.

After graduating high school in 1988 Chad followed in his father’s footsteps learning the appliance trade. When Mr. Barnard passed in 1994, Chad took over the business that he still runs today. It is a family affair Chad’s mother Martha answers the phone.

When most boys were concerned about Little League baseball or Boy Scouts, Chad was into Christmas lights. Chad’s infatuation with lights began when he was twelve years old. Chad was helping his Aunt Thelma Tanley clean out her attic when he discovered several old strands of lights. She told Chad that he could take them home to put on his house. His Uncle Glen Fleming showed him how to string them on the house, thus Chad’s Winter Wonderland was born.

Initially it was just Chad’s house that was the display. People would just travel to view the home. Sometime in the 1990’s, people began asking Chad if they drive in his driveway to get a closer look at the lights. Chad then routed his driveway to loop around all eight acres. Chad even has his own radio station onsite. You can tune your radio to 88.1 and listen to holiday music specially selected to enhance your viewing experience.

Even though the main attraction of Chad’s Winter Wonderland is the lights, our children’s favorite part is Santa Claus’ house. Chad has constructed Santa his own heated and covered living room that even has a fireplace. As we drive into Santa’s living room, we roll our windows down and our children are able to tell Santa what the want for Christmas without even getting out of the car. It is Santa Claus drive thru style. The children even get some candy from Santa for the ride home. Chad also has a mailbox for the children to send any last minute letters to Santa.

Over the years Chad’s Winter Wonderland has received local and national recognition. It was featured in a

contest on NBC’s, The Today Show where it finished in the top three individual home light displays. Chad’s lights were featured on an ABC special entitled, “Lighting up America.” Over the years Chad has collected over fifty newspaper and magazine clippings about his light display. He proudly displays the articles in his office.

Our family has many Holiday traditions. We take one night to attend a screening of “It’s a Wonderful Life” at Belcourt Cinema. We always go to Opryland Hotel to walk around the conservatory to see the Holiday decorations. Our family always eats at Hermitage Steak House to celebrate my fathers birthday on the 23rd of December.

Those are great traditions, but no year would now be complete without a trip to Chad’s Winter Wonderland.