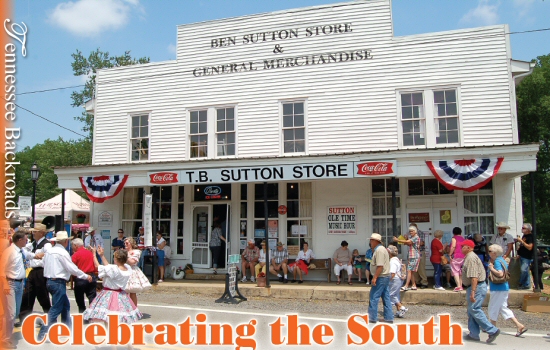 Settled along the banks of the Cumberland River, what is now Cordell Hull Lake, the small town of Granville, Tennessee is rich in history and proud of its Southern heritage. Each year, the people of the old riverboat community come together in celebration of their culture with a day of music, crafts and history. With a host of planned events, Granville’s Heritage Day offers something for everyone.

Granville’s Heritage Day first began in 1999, which coincided with the opening of the Granville Museum. The first event was a small affair with an estimated 8,000 visitors, but over the years the celebration has grown in size and scope. Granville Museum President Randall Clemons says that with no admission charge the May 28th event is attractive to those looking for family fun and hometown hospitality.

“There will be a food court and crafts up and down the street,” Clemons explained. “There will be craftsmen weaving baskets, blacksmiths, a man cooking with Lodge skillets, people making soap and all sorts of old time crafts. At the end of the street we will have children’s rides, as well as a car show, and at the old filling station there will be an antique tractor show. We will even have
an arts festival held by the Upper Cumberland Arts Alliance. We have over forty local artist that sell their work at the Sutton Store all the time, and they hold the arts festival at every event we do.”

Originally called Beech Hill, the town of Granville was first colonized in 1799 by pioneers from Granville County, North Carolina. Clemons says the first settlers came to the area looking for the ‘Promised Land’, and the river is what made the site an ideal settlement. “The Cumberland River gave them a great way to get their crops down river to places like Nashville,” Clemons explained. “This area had a lot of fertile land bottoms, and many of the settlers had been given land grants for serving during the Revolutionary War. One plantation here had sixteen hundred acres in it, owned by Colonel Smith where they grew tobacco.”

According to Clemons, the town later grew and became a steamboat town with three riverboat warehouses. “As a result, merchandise was imported here and carried by wagon to places like Cookeville and other areas. There were no trains in those days, and the town became a major import and export hub.”

Clemons says the town was even given the moniker of ‘Banana Town’ by riverboat captains, as the tropical fruit was a main import to the town, to be distributed to other nearby towns and communities. “We had three private schools, a hotel, stores, and it became a very self-sustaining community. We had five doctors at one time, and that shows that this was a very vital community.”

As with all small towns across the nation, the general store was an important part of the community, and Granville once boasted five stores in the area. While the rise of the large chain stores have all but killed the small family owned general stores across the nation, Granville’s T.B. Sutton Store has seen a rebirth and serves as a centerpiece for the town. “The Sutton Store was opened in 1880 and operated until the early 1970’s when it was closed for the next thirty years,”

Clemons said. “Then, a couple from Mt. Juliet, Harold and Beverly Sutton, came during the 2000 Heritage Day and discovered the store. They bought it, and restored it and would operate it on weekends.”

Clemons says that in 2007 the Sutton’s gave the store to the Granville Museum with the provision that it would operate it as a general store and that Saturday Night Bluegrass be held. “They had invited bands in here during the Uncle Jimmy Thompson Bluegrass Festival and determined that the acoustics were much like the old Ryman Auditorium, so they began to experiment with bluegrass every other Saturday night and had great crowds. We opened the store April 5th, 2008, with the Sutton Old Time Music Hour, and we’ve been open ever since.”

Music is an important part of Granville’s Heritage Day celebration, which highlights one of the area’s most famous sons.  Jesse Donald ‘Uncle Jimmy’ Thompson was an old-time fiddler known as the first performer to play on the WSM Barn Dance on November 28, 1925.  The program would later evolve into what is today known as the Grand Ole Opry. Today, during Heritage Day, the Uncle Jimmy Thompson Bluegrass Festival is held beside the Sutton Store and honors the old-time music of yesteryear.

This year, the Uncle Jimmy Thompson Bluegrass Award will be presented to Lebanon residents Mike Singleton and Eddie Testamand. According to Clemons, each year the award honors someone who has given of himself, or herself, to promote bluegrass music. “These two guys helped us start Heritage Day thirteen years ago by bringing a bluegrass band to Granville.

They have been involved each year since and helped organize the Uncle Jimmy Thompson Bluegrass Festival.  They also head up the Bluegrass on the Back Porch stage at the Wilson County Fair.”

“We’ve tried to develop Heritage Day so there is something for everybody,” Clemons said. “It’s a time when we draw from everywhere, but it’s also a time when people are looking for their roots. We will also be holding a memorial service at the Methodist church for anyone who has passed away in the last twelve months.”

Sticking with the history theme of the event, Granville will also host a Civil War reenactment and living history. “We’ll do an event at the Methodist church,” Clemons said. “During the Civil War, Union soldiers circled the church where a Confederate soldier was inside.

People were able to dress the soldier up as a woman and sneak him out, so we will be reenacting that. There will also be an encampment at the end of the street at the Veteran’s Park where cannons will be shot across the river. The echo from the cannons is amazing. Lebanon’s Martin Frost will also be portraying General Robert H. Hatton and Colonel Sidney Stanton.”

Another part of small town life is storytelling, and the Granville’s Heritage Day will honor this tradition with ‘Tell it From the Stump’. Local author and historian, Elizabeth Huff Bennett, says storytelling is characteristic to the area, and this year’s event will be a little different from years past.

“When you look at some of our old pictures, some of the men sitting on the porch at the store whittling, they were telling stories. Our storytellings honor this. In the past we’ve held the event on the stage, or we’ve done it from the different porches, so we thought this time we’d have a stump where someone will be there telling stories. We’ll even give the audience the opportunity to tell stories. Everyone has a story to tell, it’s just if you can get them to do it. Telling it from a stump is a little less intimidating than being on a stage or something like that.”

Bennett herself has several stories to tell, and she will be one of several authors that will be dedicating their books at Heritage Day. Her book focuses on some of the unique sayings and words found in the region. “When it thunders people say ‘the devil’s beating his wife’. Everyone has heard these sayings, but my grandchildren have no idea what we are talking about when we say these things. Even to say ‘six of one and a half dozen of another.’ So, we’re writing a book about these sayings. We’re still toying with the title, but I think it might be ‘Say What?’ and underneath that ‘How to Talk Like You’re From Around Here.’”

“We really don’t know the origins of the sayings,” Bennett continued. “When I grew up here everyone said them. The first part will be a dictionary with a preface that says these are words that you may not be familiar with unless you grew up in a small rural community in Tennessee. Words like Cattywumpous – which leans crooked – that picture looks a little cattywumpous.

Or another word like Doohickey – can be any object – What is that doohickey on the back of the tractor?” Bennett says there will also be a section that addresses the different dialects in the South.

“Just because you’re from the South doesn’t mean you’re going to understand our way of talking, because people talk differently in Texas, and North Carolina, and Louisiana, than they do around here.”

“For the sayings, I’ve tried to organize those into something about the work ethic in the South. We were all farmers, so your day started at 4:00 a.m. and it ended at dark, whatever time that was. So, there will be a group of sayings about being busy. ‘Busy as a one-armed paper hanger,’ or ‘as busy as a one-legged man in a butt kicking contest,’ that’s just what people said back then.”

“Of course the worst thing someone could say about you was that you were lazy, so there will be a section about being lazy. ‘He’s wouldn’t hit a lick at a snake,’ or ‘he’s not worth the salt that goes in his cornbread,’ that kind of stuff.”

Bennett says the book will be out on Heritage Day, along with several other books about the region. “Bananas and the Promised Land, by Ogeal Halfacre Webster will be a recipe book with stories about Granville being ‘Banana Town,’ and In the Presence of Soldiers by Woody McMillen will be about the World War II maneuvers held around Granville. Jack Masters’ book Settlement of the Cumberland will also be available at Heritage Day.

Granville will also dedicate several new exhibits during Heritage Day including a FFA exhibit featuring 1955 State Farmer Joe Moore. Moore had the honor of being on the cover of Time Magazine that year, one of only two farmers to ever grace the cover. Moore would also appear on the Arthur Godfrey Show that year.

Other exhibits include Romances of the Maneuvers which tells of the many relationships born during the World War II training exercises, and Attorneys of Granville which honors the history of the town’s many lawyers.

For those looking for more modern and fast paced history, Granville will hold an antique car show and an antique tractor show during Heritage Day. In 1915, Howard Daniels was the first Granville resident to purchase an automobile. According to historians, his Model T drew crowds of onlookers when he drove it through town, where he operated a Model T repair shop at an old blacksmith shop. Today, crowds of onlookers come to see the marvelous machines from that day to the present. At the car show, Rick Northern of LaGuardo, Tennessee, will be honored, and a Corvette Award will be presented in memory of Sue McGee of Lebanon. This year’s event will feature over 250 automobiles with 50 classes of competition.

Whatever your interest, young or old, Granville Heritage Day has something for you. Whether you like music or history, art or literature, good food or just plain good times, Granville offers something for everyone. If you’re looking for some hometown fun, head to the sleepy little town on the banks of the Cumberland River on Saturday, May 28th.